5. The DWL Legend: The Nats' first major international signing, 29-year-old right-hander Yunesky Maya's first start of the 2011 campaign starts with a backwards K. A 2-2 two-seamer breaks back in on the San Diego Padres' left-handed outfielder Blake Tekotte for a called strike three and a good start to Maya's first outing. The Cuban-born right-hander, who made his MLB debut a little over a year after he'd left his home country, gives up a two-out single to Ryan Ludwick, but a fly to left by Brad Hawpe ends a quick scoreless frame. 15 pitches, 12 strikes for Maya.

4. [CHOMP!!!]: Padres' first baseman Brad Hawpe bobbles a sharp grounder by the Shark, Roger Bernadina, and there's now way he's throwing Bernadina out. Bernadina's running with Ian Desmond at the plate, successfully stealing his seventh base before a perfect bunt by Desmond advances the runner and dies in the grass for a single. First and third for Jayson Werth, who battles San Diego starter Dustin Moseley and connects on single through second with Desmond running. 1-0 Nats when Bernadina scores. Desmond goes first to third. Laynce Nix connects on the first pitch he sees, sending it to shallow left, but Desmond runs anyway and "beats" the throw home. 2-0 Nats. Maya comes back out for the second and retires the Padres in order on twelve pitches...

3. Thanks, Bud Black: Yunesky Maya leaves a 2-2 slider up in the zone for Jason Bartlett who doubles into the left-center gap, all the way to the track. Padres' outfielder Ryan Ludwick  drives in San Diego's first run with an RBI single to center that scores Bartlett to cut the Nats' lead in half. 2-1 Nationals. The third straight hit by the Padres comes off Brad Hawpe's bat and Maya's in trouble for the first time in the fourth. First and third, one out. Chase Headley grounds into a force at second, but the throw back to first from Ian Desmond is late. First and third, one out. Chris Denorfia bunts Headley over to second to put two runners in scoring position, but Maya gets a fly to left to end a long inning. Still 2-1 Nats in the fourth.

2. Maya's Calendar Ends In 5th: Trouble again in the fifth for Maya as he gives up a leadoff single to Logan Forsythe and two outs later loads the bases with back-to-back two-out walks to Jason Bartlettt and Ryan Ludwick. The Nats' Skipper leaves the right-hander in to clean up his own mess. Brad Hawpe works the count full, fouls off a 68 mph 12-to-6 bender, an 89 mph fastball and then drives a four-seam fastball to center. RBI line drive. Two runs score, 3-2 Padres. Maya's done after 4.2 IP, 6 H, 3 R, 3 ER, 2 BB, 3 K's, 90 pitches, 59 strikes. Doug Slaten's on, so hold the ER total. Chase Headley rips a grounder by Hairston at third. Make that 4 R, 4 ER for Maya. Slaten's now allowed 12 of 23 inherited runners score, 4-2 Padres.

1. [CHOMP!] [CHOMP!]: Rick Ankiel bats for Doug Slaten in the Nationals' fifth after Alex Cora flies out for the first out of the inning. Ankiel lines a single to center, thinks about second, but turns back when Blake Tekotte gets it back in quickly. Roger "The Shark" Bernadina works the count full, Ankiel takes second with the Shark at bat, and Bernadina takes three two-strike pitches, before unloading on a full-count curve from Dustin Moseley. RBI double to right, Ankiel scores from second, but the Shark's thrown out at third trying to stretch a double into a triple. 4-3 Nats, but the tying run's out at third. Desmond K's looking, 4-3 Padres after five.

0. ARRROOO!!!: Padres' right-hander Chad Qualls starts the sixth on the mound against Jayson Werth, throwing the right-hander six-straight sliders, and the sixth ends up in left. Leadoff single for Werth, and he's running when Laynce Nix connects on a hit and run single through second. Werth goes first-to-third™. Michael Morse up, a wild pitch moves Nix into scoring position. Grounder to third, Headley throws home, but Werth slides in hard, knocking the Padres' catcher Kyle Phillips' foot off home as he scores, 4-4 game. Wilson Ramos bunts both runners into scoring position. One down. Jerry Hairston grounds to third, Nix is out at home, and Hairston's picked off first on a ball in the dirt, Phillips throws when both runners think of advancing. Wasted opportunity. 4-4 after six.

-1. Another Wasted Opp: Alex Cora singles and Danny Espinosa bunts his way on to put two on with no one out in the Nats' seventh. Roger Bernadina lines to center, but it stays up long enough for Blake Tekotte to get under it and make the catch, one down. Ian Desmond grounds sharply to third, Headley steps on the bag, throws to first, double play. Two on, 0 outs, and nothing for the Nats in the seventh...Jayson Werth reaches on "Baltimore chop" toward third, and Padres' right-hander Luke Gregerson fields and throws it away. Werth takes second. The Nats opt not to bunt here, and Nix grounds back to the mound. One down. Michael Morse walks, and a first-pitch swinging Wilson Ramos flies out to left-center. Two down. Pinch hitter Matt Stairs lines out to right on first pitch he sees. Still 4-4.

-2. STOREN WARNING: Nats' closer Drew Storen is on in the ninth, and he gives up a one-out pinch hit double to Jorge Cantu, who gets hold of a 1-1 sinker and drives it into the right field corner. Alex Cora looks Cantu back to second as he throws Jason Bartlett out on a grounder to third. Two down. Ryan Ludwick singles up the middle, Ian Desmond knocks it down, jumps up and throws home, off-balance and late, Ramos tries to tag Cantu, but cannot. 5-4 Padres lead. Heath Bell on in the bottom of the frame. 1-2-3 Padres win.

• Jim Riggleman on the chances the Nats had to score and didn't: "That's better than the alternative. I like the opportunities out there. We had our opportunities, and as we've said many times, you keep putting them out there, sooner or later you'll drive them in. But, it's a tough little stretch we're going through here, and there's nothing to do but battle through it and get to the point where we do drive those runs in. Let's hope we keep putting them out there." 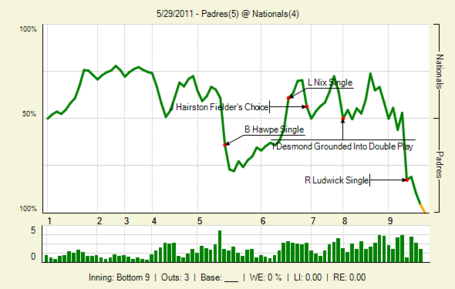