5. On paper, it's a complete mismatch: In his first year with the Phillies in 2010, two-time Cy Young award winner Roy Halladay went (3-0) in three starts against Philadelphia's NL East "rivals", holding Washington's batters to 16 hits, 5 walks and just one run scored in 23.0 IP in which "Doc" collected 20 K's and posted a 0.39 ERA, 0.91 WHIP and a .198 BAA. The one (and only) time in franchise history that the Washington Nationals have beaten Toronto's '95 1st Round pick was back in June of 2002, when Expos' third baseman Fernando Tatis hit a seventh-inning HR off Halladay to give the Montreal Expos a 2-1 lead and eventually the win over Halladay's Blue Jays.

4. Over Early: The Nationals get a one-out single by Alex Cora in the first before Halladay strikes Jayson Werth and Wilson Ramos out and the Nats waste a leadoff double by Adam LaRoche in the second. The Nats' first baseman hits his second double in two games to the same place he hit Wednesday night's, left-center and off the wall, but he's stranded at second three outs later. A 1-2-3 second for Halladay in the third, and the Phillies give him all the run-support he'll need in the bottom of the frame. 10 batters come to the plate, six of them score when Lannan allows a leadoff single to Jimmy Rollins, a two-out HR to Shane Victorino, a walk to Ryan Howard, an RBI double to John Mayberry Jr., and a two-run double to Raul Ibanez before he's lifted, breaking the Nats' streak of 30-straight starts of 5.0 IP or more. 5-0 Phillies, 6-0 when Wilson Valdez singles Ibanez in with Brian Broderick on the mound for the Nats. Lannan's run.

3. 13 Pitches!: Jayson Werth hits a leadoff single in the top of the fourth, takes second when Adam LaRoche singles to go 2 for 2 in two at bats, and scores from second on a line drive single to left by Wilson Ramos, sliding in after the ball reaches Phillies' catcher Dane Sardinha, but knocking the backstop's foot of the plate before he's tagged in the midsection. 6-1 Phillies. Jerry Hairston battles Halladay in a 13-pitch at bat, fouling off eight pitches before singling to right. LaRoche moves to third on the hit and scores on a sac fly by Ian Desmond. 6-2 Phillies.

2. RAUL!!! [Shakes Fist!!]: Once 0 for 35 when this series starter, Raul Ibanez is 7 for 11 after he hits the first pitch of the bottom of the fifth out to right field and into the second deck to give the Phillies a five-run lead at 7-2. Ibanez's 5th HR of the season is his second of the series, and second in two days with yesterday's just ten-to-fifteen rows back in right rather than into the first row up top. Three doubles, two HR's and 6 RBI's in 3 games for Ibanez...

1. 11 Straight: Roy Halladay sets the Nats down in order in the seventh, retiring the ninth, tenth and eleventh straight batters and recording his 10th K of the night when he gets Brian Bixler looking with a 1-2 fastball to end the inning. Halladay hasn't allowed a hit since Jerry Hairston's one-out single in the fourth. Halladay's done after seven innings pitched: 7.0 IP, 6 H, 2 R, 2 ER, 0 BB, 10 K's, 110 pitches, 81 strikes, 7/3 GO/FO. Danny Espinosa doubles off the wall in left to start the eighth, takes third on an Alex Cora single and scores to make it 7-3 on a sac fly by Jayson Werth. Michael Morse pops up on the first pitch he sees in a pinch hit appearance and Adam LaRoche K's to end the top of the frame. A 1-2-3 ninth by Ryan Madson ends the sweep. 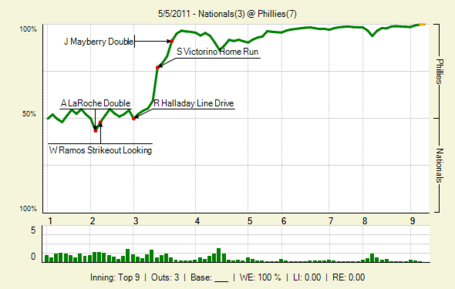