5. Veteran Leadership: Ricky Nolasco drops a two-strike change that dives like a splitter on Laynce Nix to get the Nats' outfielder swinging and cursing audibly as he walks back to the dugout. One down in the Nats' second after a scoreless first. A 2-2 bender to Adam LaRoche gets the Nationals' first baseman swinging way out in front of strike three. 2-2 to Pudge Rodriguez, but the veteran backstop sends a low liner to right that Mike Stanton can't catch and then scores from first when Jerry Hairston doubles off the left field wall and Emilio Bonifacio misplays it. Pudge speeds around from first and scores, 1-0 Nationals after one and a half.

4. Immaculate Inning: Jordan Zimmermann elevates an 0-2 fastball to get Mike Stanton swinging for out no.1. Greg Dobbs fouls two pitches off and then chases a heater up high and out of the zone. Strike three. John Buck's down 0-2 and Zimmermann pounds him inside with a fastball for a called strike three and scoreless frame in the second. Nine pitches, nine strikes for the Nationals' 24-year-old right-hander. The so-called "Immaculate Inning." It takes Zimmermann ten pitches to get through his third scoreless frame. Omar Infante grounds weakly to third, Nolasco K's swinging and Chris Coghlan grounds weakly to first. 10 up and 9 down for Zimmermann, Emilio Bonifacio's single in the first the only hit through three. 39 pitches, 31 strikes through three.

3. E On Infante? NEVER!!: Adam LaRoche reaches on what's ruled a throwing error on Omar Infante, his first of the year, which infuriates one of the Marlins' announcers on MLB.tv's broadcast. [ed. note - "Later changed to a hit, run on Nolasco."] Infante makes a tough play and a low throw that Gaby Sanchez can't pick. LaRoche is on to start the Nats' fourth and he's running when Pudge Rodriguez grounds out to second, avoids the DP. A one-out single by Jerry Hairston moves LaRoche to third and a sac fly from Ian Desmond allows him to tag and score. 2-0 Nationals after four.

2. "SQUEEZE!!": Greg Dobbs' leadoff single in the Marlins' fifth is their first hit since the first, only one batter reached between them and that was on a two-out walk in the fourth. John Buck follows Dobbs' hit with a line drive to left that Laynce Nix dives for but misses. All-or-nothing gets nothing for Nix. Second and third with no one out since Dobbs is hobbled by an ankle injury. Omar Infante drives in the Marlins' first run with a sac fly to center that scores Dobbs' from third, and Buck tags and moves from second to third with one down. Ricky Nolasco squares to bunt and pulls back, Buck looked like he was coming home. A quick chat between Marlins seems to straighten things out...Nope. Nolasco takes a fastball outside, Buck's coming home and hung out to dry. Someone missed a signal. Pudge chases the Marlins' catcher down and makes the tag. Two down, and Zimmermann strikes Nolasco out to hold the Nats' 2-1 lead.

1. BB = Trouble: Jordan Zimmermann gets away with walking Gaby Sanchez in front of Mike Stanton with two down in the fourth, striking Stanton out looking to end the inning. When he walks Emilio Bonifacio in front of Hanley Ramirez in the sixth, however, for what is only the second walk he issues tonight, the Marlins' shortstop makes him pay, lining to right to send the speedy Bonifacio first-to-third. One down, runners on the corners for Gaby Sanchez. And a bloop single to left center ties it. Bonifacio (the one-out walk) scores. 2-2, one down. Zimmermann gets up 0-2 on Mike Stanton and pops him up to the infield. LaRoche charges and makes the catch, then swipes at Sanchez and misses, but the ump punches him out anyway!!! Double play to end the sixth with the score tied at 2-2.

0. Stranded: Marlins' center fielder Chris Coghlan's having a tough night. He dives for a line drive to center and comes up empty. Jerry Hairston's on with a leadoff double. Riggleman bunts. Ian Desmond's sac bunt moves Hairston over to third. One down. Matt Stairs is 1 for 16 when he K's swinging. Two down. Danny Espinosa walks, but Marlins' first baseman Gaby Sanchez's diving stab on an Alex Cora grounder ends the inning, still tied at 2-2. Leadoff double squandered. Jayson Werth walks to start the Nats' eighth. Marlins' right-hander Clay Hensley gets Laynce Nix swinging, Nix's 3rd K in four at bats. Adam LaRoche down swinging to lefty Randy Choate. Pudge Rodriguez down swinging to righty Ryan Webb. Werth stole second with Pudge up, but he's stranded there. Still 2-2 after eight.

-1. CLIPP'D!: Tyler Clippard struck out all three batters in the seventh on just 11 pitches, and he comes back out to do the same thing in the eighth. Dobbs, Buck, Infante, Cousins, Coghlan, Ramirez, K, K, K, K, K, K!!! 22 pitches, six up and six down for Tyler Clippard. Another leadoff walk in the Nats' ninth, as Marlins' closer Leo Nunez gives Jerry Hairston a free pass. Ian Desmond flies to right, Hairston was running and has to go back. One down. Michael Morse hits for Clippard, or more accurately K's. Drew Storen gets the first two outs of the Marlins' ninth, but he gets behind Mike Stanton and hangs a 3-1 slider that gets taken for a ride to deeeeeep center, but not deep enough. Hairston catches it on the track and it's 2-2 after 9.0.

-1. STOREN WARNING: Jayson Werth takes a 3-1 slider for a called strike but then walks on the next pitch from Marlins' lefty Mike Dunn. One on, one out in the 10th. Laynce Nix is first-pitch swinging and he hits a high chopper over Gaby Sanchez at first. Werth's running and he goes first-to-third on what ends up a double. Second and third with one down for Adam LaRoche. Sac fly to deep left, Werth tags and scores, 3-2 Nationals.

Drew Storen comes back out to end it. Back-to-back singles from Greg Dobbs and John Buck. Dobbs' pinch runner Ozzie Martinez goes first to third on Buck's line drive to center. First and third. No one out. Omar Infante grounds back to the mound. Storen takes the out at first. 0-2 fastball high and outside for a called strike three on Wes Helms. Two down. Sean Burnett needs just one pitch. Chris Coghlan flies to center. Ballgame. 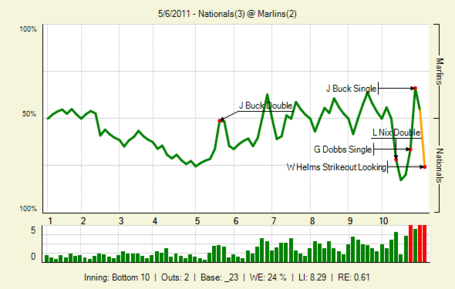