5. SharkTown: Roger "The Shark" Bernadina is back in the majors with the Washington Nationals tonight, leading off and playing center in the second game of a three-game set with the Marlins in Sun Life Stadiu_. Before the game the Nats' Skipper told the press they want to get a look at Bernadina in center, he'll be out there while Rick Ankiel spends two weeks on the DL with a right wrist sprain suffered on a diving play in Nats Park last week against the Giants.

Bernadina takes two strikes in a 2-0 count and takes ball three before singling to center on a full-count fastball in his first at bat. Marlins' right-hander Chris Volstad's concerned with Bernadina at first, throwing over four times before surrendering an infield single to Ian Desmond that bounces off Gaby Sanchez's glove allowing the Nats' shortstop to beat the covering pitcher to first. Two on and a Jayson Werth single to short center loads the bases. Adam LaRoche hits the fourth straight single. Back up the middle with a 3-1 fastball for a 2-0 lead when Bernadina and Desmond score. WIlson Ramos K's. Laynce Nix grounds into a force at second. Jerry Hairston, Jr. grounds to third. Got two at least...

4. Buck, John Buck: It takes Tom Gorzelanny two pitches to pop Gaby Sanchez up for the first out of the Marlins' second, eight pitches to walk Mike Stanton and one pitch to give up the lead. John Buck pulls a first-pitch fastball all the way out to left and over the high wall for a two-run blast and a 2-2 tie. Buck strikes again in the bottom of the fourth, from behind the plate this time. After the Nationals get a one-out single from Jerry Hairston, Hairston's caught stealing on a nice catch and throw by Buck on a pitch in the dirt from Volstad. Danny Espinosa triples after Hairston's thrown out. Still 2-2 in the fourth.

3. Desi Owns Volstad: Ian Desmond hit the second of four-straight singles in the Nationals' first and he scored on Adam LaRoche's two-run hit. Desmond triples in his third at bat after grounding out to end the second. Jayson Werth's long fly ball to right brings Desmond in and the Nats take a 3-2 lead after four and a half. Desmond's 2 for 3 so far tonight, and he's now 11 for 18 in his career against the Marlins' right-hander Chris Volstad with three doubles, a triple and a HR. Coming into tonight's game, Desmond was 0 for 14 over three games going back to his single late in the series finale against the Giants.

2. Hot D**n! That's Nice D!: Tom Gorzelanny issues a one-out walk in the fifth, but the Nats' lefty gets through five with a one-run lead and a one-hitter against Florida. The one hit, of course, is John Buck's two-run HR, which followed the first walk to Mike Stanton. Emilio Bonifacio walks to start the sixth, but he's out at second on a fielder's choice grounder by Hanley Ramirez to Espinosa and Desmond at second. Gorzelanny pops Gaby Sanchez up. Two down. Mike Stanton pops to right, Werth can't get there. Ramirez goes first to third, but Stanton goes too far around first, Werth throws behind the runner and LaRoche sneaks in to tag Stanton out! Hot D**n! That's nice D. 3-2 Nationals after six.

1. Gorzelanny Eats Fish: Tom Gorzelanny's done after a seventeen-pitch seventh in which he records his fifth and sixth K's of the night and retires the side in order. 106 pitches, 63 strikes and just two hits, two earned runs on Buck's HR and four walks, only one of which cost the left-hander. Another lefty follows as Sean Burnett replaces Gorzelanny and throws a quick 1-2-3 eighth on just six pitches. The Nats add two insurance runs in the top of the ninth. Jerry Hairston hits a one-out double off Brian Sanches. Danny Espinosa walks. Matt Stairs reaches on an error by Wes Helms on a grounder to third that rolls into left. Hairston has to run around Helms on the way to third, so he heads home. Emilio Bonifacio's throw from left beats Hairston to the plate. But he was interfered with by Helms on the basepath. He's called out but it's reversed. 4-2 Nats in the ninth. Roger Bernadina walks to load the bases. A sac fly by Ian Desmond makes it 5-2 Nats. Drew Storen on for the ninth. Hanley Ramirez K's looking. Gaby Sanchez grounds to short. Stanton grounds to short. Ballgame. 7 for 7 for Storen... 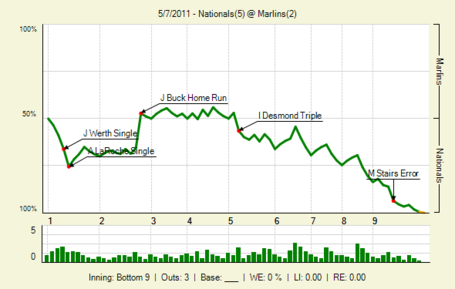