Anibal Sanchez Flirts With No-Hitter, Loses It in 7th Of 8-0 Florida Marlins' Win Over Washington Nationals.

Share All sharing options for: Anibal Sanchez Flirts With No-Hitter, Loses It in 7th Of 8-0 Florida Marlins' Win Over Washington Nationals.

5. Anibal And Gaby: Marlins' right-hander Anibal Sanchez gets the first two batters he's faces today, Roger Bernadina and Ian Desmond swinging at two-strike sliders, Bernadina an 0-2 bender upstairs that may have been a high strike and Desmond on a 1-2 bender outside that dropped out of reach for a swinging K. A weak grounder from Laynce Nix is misplayed by Omar Infante, Nix is on with two outs. Infante makes the play the second time around when Adam LaRoche provides an opportunity for redemption. Ian Desmond throws out Emilio Bonifacio. Michael Morse sprints on a weak knee and grabs a liner Chris Coghlan tries to bend into the corner in left, and Livan throws out Hanley Ramirez on a grounder back to the mound. One scoreless in the books. Sanchez throws a nasty slider to get Michael Morse chasing on three pitches, throws a 2-2 by Jerry Hairston up high and gets Pudge Rodriguez looking at a sinking fastball up high that the veteran catcher doesn't like. 5 K's in 2.0 IP for Anibal Sanchez.

4. Mr. National: Livan Hernandez tries to work his way out of a leadoff double by Gaby Sanchez in the Marlins'. A hard hit grounder by Mike Stanton on a 2-0 fastball moves Sanchez over to third, and Gregg Dobbs works the count full and rips a fastball inside by Adam LaRoche at first for an RBI double and a 1-0 Marlins' lead. Six pitch first for Livan. Twenty-five to get through the second. The Nats get a leadoff man on in the third. Anibal Sanchez loses a slider and hits Danny Espinosa. A bunt by Livan Hernandez and a groundout by Bernadina advance Espinosa to third, buy Ian Desmond chases a 2-2 slider outside and it's 1-0 Fish after three.

3. Hanley Ramirez...[Spits!]™: Hanley Ramirez was 10 for 28 (.357) with two doubles and three HR's off Livan Hernandez in his career heading into today's game, but he's also coming into the game hitting .195 with a .295 OBP and a .265 SLG, far off his customary career averages (.309/.382/.511) through the first six years of his career. The 27-year-old Marlins' shortstop has hit in just five of 28 at bats in May after a .200/.299/.259 first month+ of the season, and when he lines into an inning-ending DP in the third today, crushing a full-count change that Ian Desmond catches before doubling Emilio Bonifacio up at second, Ramirez shows his frustration, posing for a minute, resting on his bat like it's a cane and staring off into the outfield for a long....time....

2. DOBBS!! [Shakes Fist]: Gaby Sanchez doubles, to right center this time, out of the reach of Laynce Nix, who's playing right with Jayson Werth out of the lineup. Livan Hernandez drops a full-count curve in over the top on Mike Stanton to send the 21-year-old future All-Star back to the dugout shaking his head. One down, but it's Greg Dobbs again getting to Livan, lining a 2-0 change to center to score Sanchez from first for the second run generated by the two Marlins. 2-0 Fish. 2-2 slider to Jerry Hairston. 2-2 change to Pudge Rodriguez. 2-2 slider in the dirt to Danny Espinosa. Three swinging K's and nine on the day for Anibal Sanchez through five scoreless frames.

1. Mother's Gaby Sanchez Day: A leadoff single by Omar Infante and two-outs later a two-out walk to Chris Coghlan and Hanley Ramirez has another shot at Livan Hernandez. Ramirez takes a sinker for a called strike and then sends a soft fly to center on an 0-1 slider. It falls into the center field grass for an RBI single. 3-0 lead on the bloop by Ramirez. Second and third with two down for Gaby Sanchez, and it goes to a full count. Sanchez is 2 for 2 with two doubles, Mike Stanton up next 0 for 2 with a K and Livan leaves a fastball up inside for the Marlins' first baseman. Not a good pitch. Gaby Sanchez is 3 for 3 with two doubles and a three-run HR to left. 6-0 Marlins.

0. No No-No!: 1-2 slider inside for a swinging K from Roger Bernadina and the second out of the sixth for Anibal Sanchez, who sets a a career-high in K's with his 10th today. Ian Desmond flies out to Mike Stanton in foul territory in the right field corner, and the Marlins' starter has held the Nats hitless through six. Sanchez carries a no-hitter into the seventh when Laynce Nix rips a low-liner to right that Mike Stanton dives for, catches, but can't hold on to. Ruled a hit, the Nats' first of the day. Anibal Sanchez strikes Adam LaRoche out for his 11th K of the day and he's still got a shutout after retiring the Nationals in the seventh...Chris Coghlan doubles and scores on a Mike Stanton single in the Marlins' seventh to make it 7-0 Fish, and the Nats never get on the board. A wild Henry Rodriguez lets another run in during a walk and wild-pitch filled eighth, and the Nationals drop an 8-0 decision to the Fish...

Washington Nationals fall short of sweeping the Marlins on the road for the first time since September 26-28, 2005. 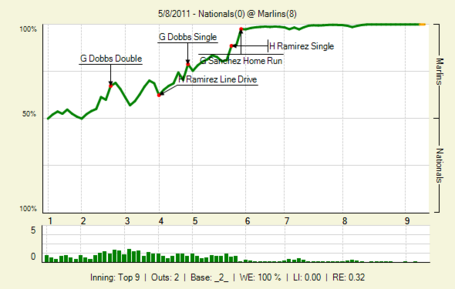