5. He Went, Sorry: Nats' second. San Diego Padres' starter Mat Latos should have struck Michael Morse out with an 0-2 slider, but a check swing that went too far for sure was not ruled a strike on appeal, and it gave the Nationals' fill-in first baseman a second chance he made the most of, absolutely crushing a 1-2 four-seam fastball from Latos that landed in the second deck in left, bringing Laynce Nix around after he's singled to start the inning. 2-0 Nats after one and a half. Jason Marquis walks Anthony Rizzo with one down in the second, his third walk in his first five MLB AB's, but he's erased on a double play grounder from Jorge Cantu to Danny Espinosa, Ian Desmond and Michael Morse. 4-6-3 to end Marquis' second scoreless...

4. "He doesn't throw anything straight," Padres announcer: Jason Marquis strikes out the side in the bottom of the third, setting the seven, eight and nine hitters, Logan Forsythe, catcher Rob Johnson and the opposing pitcher down in order on 17 pitches. The walk to Anthony Rizzo in the second is the only blemish on the Nats' winningest starter, who's through San Diego's order once, with three scoreless on 44 pitches, 26 strikes with four K's and four groundouts. Eight pitches, and three more groundouts in the fourth, Marquis is rolling against the Padres.

3. No No-No: Ryan Ludwick's leadoff double in the fifth is the first hit off Jason Marquis tonight, and Anthony Rizzo's up with a runner in scoring position. A HBP puts the Padres' rookie on again after he'd walked in his first at bat, and now he's reached base in five straight trips to the plate (triple, 3 BB, 1 HBP). Two on, no one out. Jorge Cantu crushes a belt-high slider inside, but it only gets to the track in left. One down. Forsythe flies to right. Two down. Just when it looks like Marquis will walk Rob Johnson, down 3-1, he hits the low outside corner for a called strike, count's full and just when it looks like Johnson's hit a line drive to center for an RBI single, Danny Espinosa shows off his range, tracking down the third out of the fifth behind second and making a rangy catch.

2. On Early Blown Chances: A lot was made of Rick Ankiel getting caught stealing third last night with Jayson Werth, up, though there's no guarantee the same outcome (a Werth triple) would have resulted had Ankiel remained on base. Tonight, Ian Desmond's caught trying to steal second with Jayson Werth up after Desmond's one-out single off Latos. Werth strikes out swinging in the next at bat. Werth singles with one down in the bottom of the fifth, and if it wasn't for PETCO Parks' homer-hating dimensions it would be 4-0 on Laynce Nix's HR-anywhere-else that ends up a flyout to Brad Hawpe in right. That brings the red-hot Michael Morse to the plate, but Werth's picked off and Morse will instead lead off the Nats' sixth.

1. Clipp'd: A one-out double, single and walk load the bases in the top of the sixth. Jason Marquis is laboring. Ryan Ludwick works the count full against the Nats' right-hander, and takes ball four to force in a run, 2-1 Nats. Anthony Rizzo's up next, and it's another full count, but this time a strikeout. Rizzo K's swinging on a slow change down in the zone. Jorge Cantu grounds out. Marquis' done after 6.0 IP, 3 H, 1 R, 1 ER, 3 BB, 5 K's, 100 pitches, 59 strikes. Nats' right-hander Tyler Clippard retires the Padres in order on 11 pitches in the seventh, and when the Nats fail to add to the lead in the top of the eight, Clippard's back out and he issues a leadoff walk to Chris Denrofia. A sac bunt advances the runner, but that's also known as giving away outs. Two K's later, Clippard has two scoreless.

0. STOREN WARNING!!: Drew Storen misses high and outside with the first two pitches he throws to Padres' rookie Anthony Rizzo in the ninth, and then he misses low and away to go 3-0. Four-pitch walk to Rizzo, but he's erased on a double play grounder by Jorge Cantu. 5-4-3. Two down. San Diego catcher Kyle Phillips singles through second. Nick Hundley takes a 1-2 slider high and inside for a called strike three. Ballgame. 2-1 Nationals. Marquis' 7th win, Storen's 13th save.

• Doghouse's Post Game WPA Graph: "Game 64: Ask your coach if OFFENZA is right for your team": 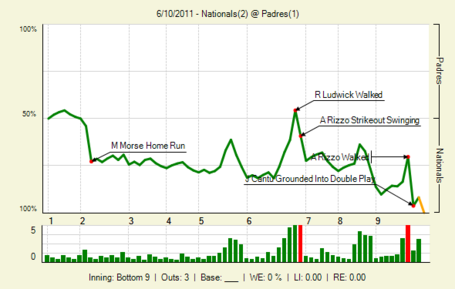