Share All sharing options for: Washington Nationals/Senators Win 2-1 Over The San Diego Padres On 1936 Throwbacks Night.

5. Leadoff WereWerth And The 8-Spot Hurler: Washington Senators' Skipper Jim Riggleman's talked about the work that he and his staff put into putting their lineup together every day back in late April when a reporter in a press conference asked a two-part question about the decision-making process which resulted in Rick Ankiel batting second and the Sens' failure to get top-of-the-order hitters on base:

Jim Riggleman: "We put a lot of time into putting together a lineup, where people are going to hit, but people a lot smarter than me will tell you, it's really irrelevant. It's almost literally irrelevant where they hit in the order. The computers will spit it out and say it doesn't matter where they hit..."

In explaining the lineup the Nats fielded tonight, Riggleman said, "We just have not been a successful offense to this point. So we’ve got to try something," in an article by Washington Post writer Adam Kilgore entitled, "Jayson Werth not surprised to leadoff, and Jim Riggleman explains the Senators' lineup." The Senators' Skipper and his staff decided that tonight they'd shake things up with the Sens' roster, batting the pitcher, John Lannan eighth, center fielder Roger Bernadina ninth and moving right fielder Jayson Werth to the leadoff spot, where he'd be making his 22nd career start as a leadoff man.

In those 22 starts (29 games overall), Werth has a .253/.345/.432 slash. Werth's .345 OBP this season, is a significant improvement on the combined .267 OBP the Nats have from their leadoff batters this season. Roger Bernadina and John Lannan, not surprisingly, don't have stats for their time spent in the eighth or ninth spots in the order. They will after tonight...Scratch that, and scratch Roger Bernadina, who has a hamstring issue. Brian Bixler bats ninth. Would the shakeup work?...

4. Go Sens Go: The Senators' leadoff man Jayson Werth goes five pitches deep in his first at bat with the Padres' lefty Clayton Richard, and Werth lines sharply to third only to be robbed of a hit by Chase Headley. Ian Desmond singles in the two-spot, however, and Danny Espinosa lines a 1-0 slider to left for an RBI double that gets by a diving Ryan Ludwick. Desmond scores from first, and Espinosa steals third with Michael Morse at bat. Morse K's, but Wilson Ramos drives Desmond in when he buzzes Richard's tower with an RBI single over the mound. 2-0 Senators. Washington's left-handed starter, John Lannan retires the Padres in order in the bottom of the frame, six pitches, six strikes.

3. Under Review: John Lannan gets a weak grounder back to the mound from Ryan Ludwick to start the second, but the first pitch he throws to Padres' rookie Anthony Rizzo ends up in the right field stands. Wilson Ramos is set up away, but Lannan's fastball stays inside and Rizzo hits it about 380-390ft to right. 2-1 Sens after two. The Padres get a two-out single from Jason Bartlett in the third, but that's it, Lannan's through the third. The 15 pitches it takes leave him at 43 total heading into the fourth. The 44th pitch from Lannan in the 5th is a hanging curve he throws to Ryan Ludwick, who hits bounces it off the brick wall of the Western Metal Supply Co. building in left field, just to the left of the yellow line which is painted on the wall. The umps review the original HR call and reverse it. Clayton Richard retires eight straight after Brian Bixler's two-out single in the second, and doesn't give up another hit until Bixler singles again in the fifth, but a Jayson Werth DP grounder erases the Senators' runner. Lannan gives up a leadoff single in the fifth, but three groundouts later he's through another frame with the 2-1 lead in tact.

2. Best Thing Since The Chicken: Ryan Ludwick and the San Diego sensation Anthony Rizzo get back-to-back two-out hits off John Lannan in the sixth, Ludwick a single to center, and Rizzo a double by first and into the right field corner. Ludwick stops at third as Jayson Werth throws in. Two on, two out. Nick Hundley gets a free pass so Lannan can face lefty Brad Hawpe. Bases loaded. Hawpe hits a groundout to second, Espinosa fields and throws, still 2-1 Sens after six. Lannan comes back out for the seventh after the Senators go down in order on nine pitches in the top of the frame, but a one-out bloop single to right by Jorge Cantu ends the Sens' starter's night. Lannan's Line: 6.1 IP, 6 H, 1 R, 1 ER, 2 BB, 1 K, 1 HR, 12 groundouts, 4 flyouts, 96 pitches, 60 strikes. Todd Coffey sprints in to relieve Lannan and gets two groundouts to strand Lannan's runner. Still 2-1 Washington.

1. "Leadoff walk often spells success for the offense." - Padres' announcer Dick Enberg: Tyler Clippard takes over in the bottom of the eighth and issues a leadoff walk to Chase Headley. The Nats' right-hander pops Ryan Ludwick up, strikes Anthony Rizzo out with a 2-2 fastball and Nick Hundley out with an 0-2 heater. The Nats just aren't going to put runners on, so Drew Storen's going to have to hold on to the Nationals' 2-1 lead.

0. Bottom of the Ninth: The Flat-Brimmed Closer gets a generous call on a 3-0 fastball low and away, and a swinging strike makes it a full count vs Brad Hawpe. Swinging K on a fastball that keeps going away. ONE!! Will Venable flies out to Brian Bixler in left. TWO! Catcher Kyle Phillips, gets a pinch hit appearance, and goes to a full count. Ball four. Tying run on. Alberto Gonzalez on to run. Chris Denorfia's at the plate, and down 0-2 quickly when Storen drops a slider in over the top for a called strike three. 2-1 Nationals win. Lannan gets the Curly-W. Drew Storen gets the save, no.14 on the season. 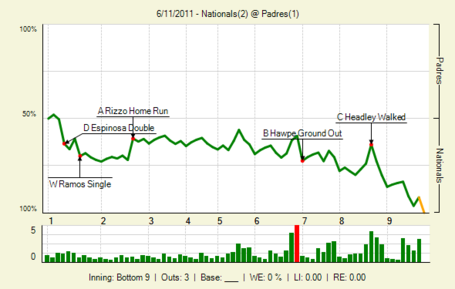