5. Support Zim(n)!!: Jordan Zimmermann held the Baltimore Orioles off the scoreboard through six and a third on May 22nd, in his second career start against the Washington Nationals' Mid-Atlantic geographical rivals. A leadoff single in the O's seventh, however, and the Vladimir Guerrero two-run line-drive HR that followed were all Baltimore would need that day to beat Zimmermann and the Nats, who scored just one run off Orioles' starter Chris Tillman and couldn't rally against the blackbirds' bullpen in a 2-1 loss. The Orioles get on the scoreboard early this afternoon, however, when Adam Jones unloads on a 3-1 fastball from the Nats' 25-year-old starter with two down in the first. A. Jones drives it out to left and 15 rows deep. 1-0 Orioles after a half...

4. THE KIDS CALL HIM ZIM!!!: Ryan Zimmerman's first HR since April 5th in Florida and his second overall on the year is sent screaming out to left after the Nats' Face of the Franchise crushes a 1-0 fastball from O's lefty Brian Matusz for a two-out solo shot in the bottom of the first. 1-1 game. The Orioles' '08 1st Round pick (4th overall) gets Michael Morse looking to end the Nats' first, and the O's first baseman Derrek Lee sixth-straight hit, a leadoff single in the second after he went 5 for 5 last night, has the Nationals' starter in trouble again. Jordan Zimmermann gets help from his catcher, however, as Pudge Rodriguez throws D. Lee out going for second after Luke Scott's fly to right fails to advance the runner. Pudge's throws out the 9th runner of the year in 19 attempts, and the Nats' catchers have a combined 49% CS% (Wilson Ramos is at 50% even 12 CS of 24), which makes them the best defensive combo in baseball by far. Zimmermann walks two with two down, but completes a scoreless second, still tied at 1-1.

3. $^#6#&**% D. LEE!!: Derrek Lee's 7 for 7 in this series after he doubles to left field off Jordan Zimmermann with one down in the O's fourth. D. Lee takes second on Jerry Hairston's arm, sliding in safely ahead of the throw and Ian Desmond's attempted tag. Felix Pie pinch hits for Luke Scott and sends Lee to third with a single through the right side of the infield. Zimmermann dials up a 94 mph fastball and throws it by Mark Reynolds for a swinging K and the second out, and Robert Andino grounds out to first to keep it tied after three and a half. 1-1 game. 65 pitches, 36 strikes for Zimmermann. Brian Matusz gives up a swinging bunt to Michael Morse and a two-out walk to Jerry Hairston, but he gets Pudge Rodriguez looking with a full-count curve for out no. 3. 65 pitches, 38 strikes for the O's lefty.

2. OPPO-BOPPO!!: Ryan Zimmerman hits a one-out double off the out-of-town scoreboard in the Nats' sixth. Zim's 2 for 3 with a double and a HR so far this afternoon, 6 for 23 with two doubles and a HR since returning to the Nats' lineup. Michael Morse puts a charge into an 0-1 change from Matusz...and drives it out to right. All the way the other way for an opposite field blast. Morse's two-run HR is his 13th of the season and it gives the Nats a 3-1 lead over the O's in the sixth. Matusz leaves the game with an apparent leg injury after Danny Espinosa gets the third straight hit off the O's lefty. Orioles' reliever Clay Rapada picks Espinosa off, but gives up a two-out walk to Jerry Hairston and a two-run double to Pudge Rodriguez that makes it 4-1 Nats after six innings in the nation's capital.

1. Ride the LIGHTNING!!: Mark Reynolds singles though the left side of the infield to start the O's seventh, and one out later, Nolan Reimold hits a pinch hit single to center to put two on with one out. Zimmermann gets a visit from Nats' pitching coach Steve McCatty and the Nationals' trainer, but he stays in long enough to surrender an RBI single by J.J. Hardy that scores Reynolds from second to make it 4-2 Washington. Zimmermann's done. Zim(n)'s line: 6.1 IP, 8 H, 2 R, 2 ER, 2 BB 2 K's, 99 pitches, 59 strikes, 7/7 GO/FO. Henry "Lightning" Rodriguez replaces Zimmermann, pops up Nick Markakis and strikes out Adam Jones. 83 mph slider for strike one, 101 on the heater fouled off for strike two and then back to the bender for a swinging K from the O's outfielder. 4-2 Nats after seven.

0. Lighting/Storen: Henry Rodriguez comes back out for the eighth. Matt Wieter flies to left on a 1-0 fastball. Derrek Lee flies to left on a full-count slider. Two quick outs for the flame-throwing right-hander, but he issues a two-out walk to the light-hitting O's outfielder Felix Pie. Rodriguez starts Mark Reynolds down 2-0, but fights back to 2-2 and drops a filthy two-strike slider in for a called strike three and a scoreless top of the eighth. Drew Storen's on in the ninth after the Nats go down in order in the bottom of the eighth. Robert Andino grounds out to third, and he's tagged by Michael Morse after a wide throw by Zim. ONE!! Vladimir Guerrero pops up on a full-count fastball. TWO!! J. J. Hardy flies to center and the Nationals win their eighth straight when Roger Bernadina makes the catch, 4-2 Nats over the O's. Storen's 17th save. The Nationals 35th win. 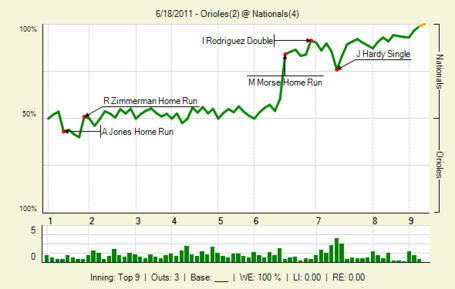 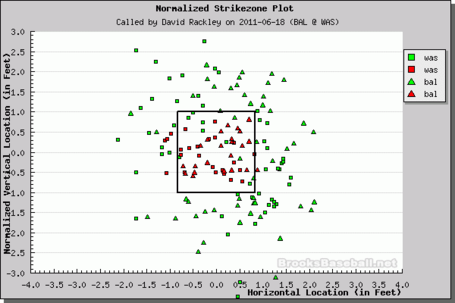