5. No Moar Lefties: The Washington Nationals enter tonight's game with the NL's second-lowest team average against left-handed pitchers (.223 to ATL's .220), the second-worst OBP (.305 to ATL's .294), the fifth-lowest SLG (.357) and the worst BABIP (.267) overall in the Majors. Jerry Hairston, Ryan Zimmerman and Jayson Werth are the only three hitters in the Nats' lineup who've faced Erik Bedard before, and they have one hit between them in 11 combined plate apperances. But these are not the same Washington Nationals. Not last night when the rallied for a five-run ninth and a walk-off win, and not in the first tonight when they rally with two down. Ryan Zimmerman patiently accepts a two-out walk. Michael Morse destroys a 3-0 fastball from Bedard, grounding sharply to third where the ball eats up Chone Figgins. Danny Espinosa's single up the middle makes the two-out walk and error hurt even more. Zimmerman scores, 1-0 Nats after one on an unearned run...

4. The Moose?: John Lannan needs 19 pitches to get through two scoreless frames, retiring five of the first six batters he faces. Miguel Olivo reaches when the wild pitch he K's chasing to lead off the second gets away from Nats' catcher Wilson Ramos, but the Seattle backstop's erased from the basepaths one out later on a slick 5-4-3 DP. Lannan puts the Mariners down in order again in the third, but he needs 19 pitches to do it, eight of them wasted on the opposing pitcher, who ends up striking out. Lannan gets squeezed on a two-out, 0-2 pitch to M's first baseman Justin Smoak in the fourth. Smoak takes advantage of the extra strike to connect on the first hit of the night off the Nats' lefty, doubling to the left field corner. Seattle's second hit comes one out later when Miguel Olivo's single to right scores Smoak and ties it at 1-1 after three and a half in the nation's capital.

3. Unearned Lead: Mariners' left-hander Erik Bedard gives up the one run early then settles in. Danny Espinosa's one-out single in the fourth is the Nats' first hit since the second baseman singled with down in the first to drive in Washington's only run. A wild pitch with Espinosa running and a throwing error by M's catcher Miguel Olivo allow Epsinosa to steal second and take third, and he scores on an infield single by Jerry Hairston that puts the Nationals back up at 2-1. Hairston makes Bedard pay for hanging a 2-2 curve, and the Mariners pay for their errors as both of the Nats runs are unearned ones.

2. Rundown!!: John Lannan gives up a leadoff single to Ichiro Suzuki in the Mariners' sixth. The Nats get a little too cute, with Ian Desmond trying to double up the Seattle outfielder with a surprise throw behind the runner at first after a flyout to left by Brendan Ryan. Desmond had no chance, and Michael Morse can't make the catch, so the sails past first and bounces into the stands for a two-base throwing error. Ichiro's on third, but he's caught off the bag when Justin Smoak, uh, smokes a grounder to Ryan Zimmerman at third. The Mariners' future Hall of Famer's caught in a rundown and tagged. Two down. Smoak's on at first. Lannan's done. Henry Rodriguez gets squeezed on a 1-2 slider to Miguel Olivo, and the M's C ends up hitting a single, but both runners are stranded when Franklin Gutierrez grounds out. 2-1 Nats after five and half.

1. Flamethrower: Henry Rodriguez is throwing heat, hitting 100mph+ on the radar on four of the first seven pitches he throws in the seventh, but after a two-out single by Dustin Ackley and 22 pitches total, he's lifted for the left-hander Sean Burnett so the Mariners have to lift their pitcher for a pinch hitter, Jack Cust, who singles off the Nats' lefty to put two on with two down and Ichiro up. Burnett gets Ichiro swinging for only the 25th time in 305 at bats this season. Still 2-1 Nats in the seventh. Strong outings by both Nats' relievers.

0. Clipp and Store: Nats' right-hander Tyler Clippard needs just nine pitches to retire the Mariners in order in the eighth. 2.1 scoreless by the Nationals' bullpen after John Lannan's 5.2 IP. The Nats' flat-brimmed closer's on in the 9th, and he's strong from the start. Franklin Gutierrez K's swinging over a nasty two-seamer that busts in as it reaches the plate. ONE! Mike Carp flies out to left. Two. Storen throws a fastball for a strike at 93 then busts out back-to-back sliders that are both called for strikes. Chone Figgins K's looking. The Nationals win. Lannan gets the win, (W, 5-5). 5.2 IP, 3 H, 1 R, 1 ER, 0 walks and 3 K's for Lannan on 89 pitches, 59 strikes. Storen gets save no. 18 on the year and the Washington Nationals are a .500 team. 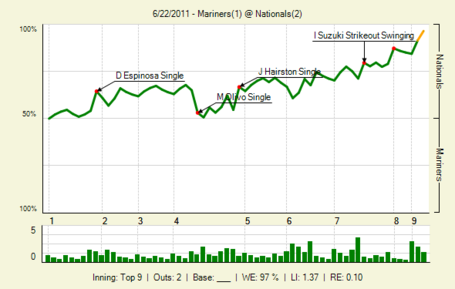