5. Two New Skippers: Nats' Skipper John McLaren's debut on the bench sees him back managing an AL team for the weekend with Washington on the road in Interleague play against the White Sox in Chicago. The last time McLaren was a major league manager, in 2008, it was with the Mariners the Nats just swept in a three-game weekend series in the nation's capital. McLaren was replaced on the bench in Seattle by his bench manager Jim Riggleman, who hired McLaren when Riggleman got the job on the bench in D.C., but Riggleman resigned yesterday to make way for McLaren's ascent.

The 59-year-old manager was 68-88 in 156 games at the helm with the AL West's M's, but before his first night on the Nats' bench was over, it was announced that McLaren's run as interim-manager would be a short one. According to several sources, including SI.com's Jon Heyman, the Nationals are set to name 68-year-old former major leaguer and Mets, Reds, O's and Dodgers' skipper Davey Johnson as Jim Riggleman's successor. Johnson's deal is reportedly through 2013, though the Nationals haven't made it official. John McLaren's debut on the bench would end in the eighth...the game would last 14...

4. Dunn-K!!: The first showdown between Jordan Zimmermann and the former Nats' slugger Adam Dunn takes place in the top of the first, two outs after the Nationals' right-hander walks leadoff man Juan Pierre and surrenders a single to Brent Morel. The former Washington first baseman, who brings a .175/.314/.323 slash and a league-leading 91 K's into his first at bat of the night, has 92 K's when it's over. Dunn offers at a 3-2 curve that Zimmermann buries inside, and he's called out on a check swing strike three that Washington fans will surely remember. The fact that Dunn's already being booed by the White Sox fans in attendance is disturbing...

3. Quick For AL Ball: Jerry Hairston Jr. lines to left field to start the Nats' third, sending a 1-0 fastball from Edwin Jackson out to the left field grass by the extended glove of White Sox' third baseman Brent Morel. Jackson's got Nationals' hitters guessing early, however, and swinging and missing often. Ian Desmond K's swinging over a 1-2 slider in the dirt. Jayson Werth takes a 2-2 slider up high for a called strike three. Roger Bernadina's groundout ends a scoreless top of the third for the White Sox' starter. Jackson collects his seventh K in four innings from Wilson Ramos, who goes down swinging at a full-count slider after Jackson surrenders a two-out walk to Michael Morse and a single to Danny Espinosa. No score after four as Zimmerman gives up a one-out single by Alex Rios before an inning-ending 6-3 DP on a grounder to short by A.J. Pierzynski...

2. Stop Bunting Riggl-McLaren!!: Jerry Hairston's 2 for 2 on the night after he singles to right off Edwin Jackson to start the 5th. The Nats' left fielder tonight is running when the White Sox guess right and pitch out, but Hairston slides in safely under a high throw from Pierzynski. Ian Desmond bunts Hairston over to third (aka wastes an out), and Hairston's thrown out at home running on contact on a grounder to short by Jayson Werth. Roger Bernadina K's swinging to end the top of the fifth. Jordan Zimmermann needs just 8 pitches to retire the White Sox in order in the home half of the frame, and he's at 68 pitches total after five scoreless.

1. [CHOMP!!]: Adam Dunn's got two K's tonight, but he's up with a runner on in the White Sox' sixth and he appears to have made it a 2-0 game when he flies to deep right field and over the wal--ROGER BERNADINA times his leap perfectly and pulls a potential two-run HR back into the park! Roger Bernadina robs Adam Dunn of HR no. 8 on the year. Still 0-0 after six innings in Chicago. Adam Dunn's heard boos in each at bat tonight. He got all of that one, but the Nats have a Shark in center field.

0. MORSE CRUSH!!!: Chris Sale is on for the Sox after 7.0 IP by Edwin Jackson in which the Chicago right-hander gave up five hits and two walks without allowing a run. Jackson ends his outing with eight K's. Sale lets the leadoff runner on when Roger Bernadina surprises everyone with a bunt single. Bernadina steals his 11th base in 11 attempts one out later, with former Nats' reliever Brian Bruney on the mound in place of Sale, and the Shark takes his time coming home on Michael Morse's 14th HR of 2011. Morse gets hold of a 1-0 fastball from Bruney and send it center for a two-run blast and a 2-0 Nats' lead after seven and a half...

-1. Lightning Striking Again: Henry Rodriguez has two down in the White Sox' eighth when he gives up a hard-hit liner to short by Paul Konerko. Ian Desmond knocks it down, recovers, but throws wide of first. Morse comes off the bag, but makes the tag...according to the ump at first at least. The home plate ump Jeff Nelson reverses the call saying Konerko was safe, and the Nats go wild. Jerry Hairston's tossed, Interim Manager John McLaren's tossed. Konerko's on at first and Ligntning Rod's done. Sean Burnett on vs Adam Dunn, and the Nats' lefty gets the Sox' slugger to ground out to second. 2-0 Nats after eight. 3-0 Nats after Ian Desmond drives Wilson Ramos in following a leadoff walk by the Nats' catcher and a sac bunt by Brian Bixler.

-2. STOREN WARNING!!: Drew Storen gets a weak grounder from Alex Rios to start the ninth. ONE! The Nats' flat-brimmed closer gets himself in a bit of trouble, however, after surrendering back-to-back one-out singles to A.J. Pierzynski and Brent Lillibridge. Two on and Sox turn to pinch hitter Mark Teahen, who replaces Gordon Beckham. Teahen crushes a 1-1 sinker from Storen and sends...it...all...the...way out to left! 3-run HR and a tie game. 3-3 on Teahen's 2nd HR of the year. Teahen stepped to the plate with a .197/.303/.273 line, though he is 3 for 9 as a PH in 2011 as the Sox' announcers point out. 4 for 10. 3-3 game after nine. Free baseball.

-3. NIX'D!!!: Laynce Nix steps in against Sox' right-hander Sergio Santos with one down after Ryan Zimmerman K's swinging at a filthy slider that's already in A.J. Pierzynski's mitt when Zimmerman's punched out. Nix spits on a first pitch change from Santos, then fouls off two pitches before the Chicago reliever tries the offspeed pitch again. Nix is waiting for it and he sends it sailing out to right-center and into the U.S. Cellular stands for his 11th HR this season and a one-run Nats' lead. 4-3. That's all the Nats get. Todd Coffey sprints to the mound looking for his first save as a Nat. Alexei Ramirez lines to third, one down. Paul Konerko takes a one-out walk and Adam Dunn steps in and rips a double by first. Pinch runner Omar Vizquel takes third on Dunn's hit and it's second and third with one down. The Nats walk Alex Rios to load the bases for A.J. Pierzynski. Coffey throws his first wild pitch in his 29th inning of the season. The ball gets by Nats' backstop Wilson Ramos, and Omar Vizquel scores to tie it 4's. Pierzynski's walked and the bases are loaded for Brent Lillibridge. Swinging K. Mark Teahen pops out. On to the 11th.

-4. On To The 12th: Still tied at 4-4 after 11. The Nationals take another lead in the top of the frame. Laynce Nix singles to left and two outs later goes first-to-third™ on a single by Wilson Ramos. The most unexpected hero of all, Brian Bixler doubles to right field off Jesse Crain, and the Nats once again take a one-run lead, 5-4. Tyler Clippard's on to end it. 5-4 D.C. after Bixler's double, and there are two down quickly as Dunn grounds out and Alex Rios flies to left. A.J. Pierzynski's down 0-2, and he gets hold of a fastball from Clippard that's out in a hurry. GONE! NO!! HR to tie it with the Nats just one strike away. It's tied at 5-5 after the Nats' third blown save and it's going to 13...make it 14...

Brian Bixler beats out an infield single with two down in the Nats' 14th, on what should be the third out of the top of the frame for Chicago lefty Matt Thornton. White Sox' shortstop Alexei Ramirez commits a throwing error, fielding a sharp grounder from Desmond but throwring low and by Mark Teahen at first. Bixler scores on the error. Jayson Werth's walked to load the bases for Roger Bernadina, and the Shark makes the Sox pay with an RBI single to center. 7-5. Zim hits a two-run double to drive in Werth and Bernadina. 9-5!! Collin Balester, the last available Nats' pitcher, will go another frame, but he surrenders back-to-back one-out singles to Omar Vizquel and Adam Dunn before he's finally able to end it in the fourteenth on a double play grounder by Alex Rios to Ian Desmond at short, Danny Espinosa at second and on to Michael Morse. The Nats win their fourth straight and climb two over .500. 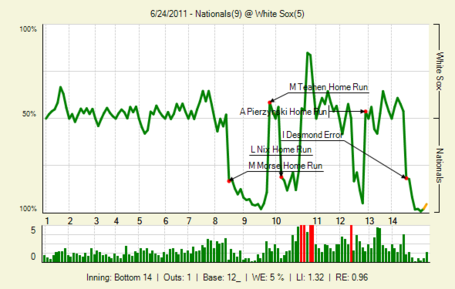 (Graph doesn't have last couple of outs, but I have to go to bed, so I'm not waiting for it to update.)

(Tip of the Nats cap to Steck It Out in the game thread for the title.)