5. Old-Timey Baseball: It was old-time baseball on the radio this afternoon, following along with Charlie Slowes and Dave Jageler on WJFK since Nats fans outside the nation's capital were blacked out as per the rules of FOX's Saturday national broadcasts. After 14 innings last night, the Nationals need a strong start from lefty Tom Gorzelanny, who's one start into a return from the DL. The former Chicago Cubs' pitcher missed time with elbow inflammation and struggled his first time back, allowing 10 hits and 5 runs in 4.2 IP last time out against the Orioles. Gorzelanny gives up back-to-back singles to Brent Lillibridge and Brent Morell this afternoon, and a sac fly by Carlos Quentin with runners on first and third makes it 1-0 White Sox early. Gorzelanny needs 21 pitches to get through the first. Not the kind of start the Nats wanted...

...Danny Espinosa's hit with a 90 mph cutter from Sox' starter John Danks with one down in the Nationals' second. The Chicago right-hander picks Espinosa off first, however, but the Nats' speedy infielder slides in safely at second when White Sox' first baseman Adam Dunn makes a low throw that shortstop Alexei Ramirez can't handle. After popping Jerry Hairston up for the second out of the Nats' second inning, Danks calls for a trainer. A hip/back issue is bothering him and after just one trial throw he's out with Nats'-reliever-for-a-minute Brian Bruney brought on early in relief. Ivan Rodriguez lines to left for what would have been an RBI line drive if not for a diving catch by Brent Lillibridge. 1-0 Sox after one and a half...

3. SHARK CS? NO?: Roger Bernadina's 6 for 13 in the last three games, and 5 for 9 in U.S. Cellular Field this weekend after he hits a line drive single to center off Brian Bruney in the Nationals' third. The Nationals' outfielder is 11 for 11 on the basepaths this year, but he's thrown out for the first time, or at least according to the ump at second, though the slo-mo replay shows the Shark was safe. No score for the Nats after three. Tom Gorzelanny gives up another bloop single by Brent Morel to start the Sox' third, but he retires the next three batters in orded to keep the Nationals close. Still 1-0 Sox. After the Nats go down in order in the top of the fourth, Gorzelanny's back out, and in spite of a one-out single and a one-out walk to Alex Rios and Ramon Castro, he's through four scoreless after fly ball outs from Gordon Beckham and Brent Lillibridge. Still 1-0 Sox after four.

2. How'd They Ever Get Two: Ian Desmond connects for a line drive single to center with two down in the top of the sixth. The Nats' second hit of the game is their first off reliever/starter Jake Peavy, who's forced into action by the injury to Danks. Peavy tries to pick Desmond off, but the throw gets by Adam Dunn, allowing Desmond to take second. Ryan Zimmerman K's swinging for the third time today, and the Nationals are getting shutout by three different Sox' pitchers through six. Tom Gorzelany gives up another bloop single, this one by Alex Rios with one down in the sixth, but he strikes out Ramon Castro and pops up Gordon Beckham. 1-0 Sox through six. Gorzelanny's at 103 pitches, 65 strikes. The Nats' lefty is brought back out for the seventh and he rewards interim-Manager John McLaren's faith, retiring the White Sox in order for the first time today and doing it on nine pitches to spare the Nats' bullpen.

1. Starter By Committee Works: John Danks threw 1.2 scoreless. Brian Bruney 2.1. After striking out two of the three batters he faced in the top of the eighth, White Sox' right-hander Jake Peavy's through 4.0 scoreless with seven K's. The Washington Nationals were not prepared for the filthy stuff Peavy's throwing in his first relief appearance since he was a Padres' prospect pitching at Class-A Fort Wayne in 2000, a year after he was selected in the 15th Round of the 1999 Draft. Still 1-0 White Sox after seven and a half. 3-0 White Sox when Henry Rodriguez implodes in the home-half of the eighth. A leadoff single by Paul Konerko, a one-out walk to Adam Dunn, and both slugger's pinch runners end up scoring on a bases-loaded bloop single to right by Ramon Castro. 3-0 Sox after eight. Sergio Santos throws a scoreless ninth and the Nats are held to two hits in a 3-0 shutout loss to the Sox. 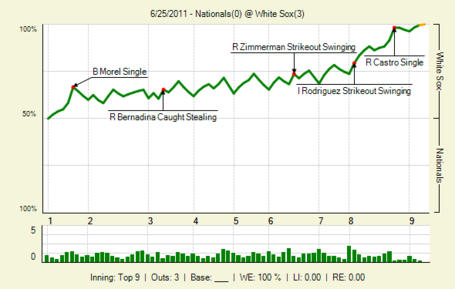