Washington Nationals Tie It On Danny Espinosa 2-Out HR In 9th, Lose It 4-3 To Los Angeles Angels In 10th.

Share All sharing options for: Washington Nationals Tie It On Danny Espinosa 2-Out HR In 9th, Lose It 4-3 To Los Angeles Angels In 10th.

5. MORSE CRUSH!!: Macier Izturis and Erick Aybar both reach on singles to start the bottom of the first against Nats' lefty John Lannan. Izturis singles back up the middle on a 1-1 fastball and Aybar reaches on a perfectly placed bunt which dies in the grass down the first base line. Three outs later, after a swinging K from Bobby Abreu an uproductive fly ball to center by Vernon Wells, and a groundout by Howie Kendrick, the Washington Nationals' 26-year-old starter has a scoreless frame on the board. Two pitches later, Lannan's got a 1-0 lead. Michael Morse jumps on a slider from Ervin Santana, who hung one up for Ryan Zimmerman for the Nats only hit of the first. Morse sends the second hanger from the Anaheim right-hander out to right-center for HR no.15 on the year and a 1-0 lead after one in LA...

4. Can Davey Fix Jayson: Three Nationals batters went down in order in the top of the third inning. They only made Ervin Santana throw nine pitches total, the last pitch a four-seam fastball to Jayson Werth for a called strike three. The strikeout drops Werth's average to .227 on the year. Werth's 1 for 16 with 9 K's in the first four games of the Nats' six-game road trip. John Lannan matches the Angels' starter with his own 1-2-3 third and he does it on eight pitches to preserve the Nats' 1-0 lead through three and Ryan Zimmerma---THE KIDS CALL HIM ZIM!!! THE KIDS CALL HIM ZIM!!! Ryan Zimmerman gives Lannan two runs to work with when he gets hold of a 94 mph two-seam fastball from Ervin Santana that he tucks inside the left field foul pole. 2-0 Nats after three and a half...

3. Can't Keep Letting First Two On: Identical singles through short for Bobby Abreu and Vernon Wells off John Lannan in the Angels' fourth. Howie Kendrick flies out to right. Mark Trumbo flies out to center, and the Nats' lefty looks like he's going to escape trouble again. Alberto Collaspo reaches out for a 1-0 curve and lines it weakly to left, however, and a weak throw in from left by Laynce Nix gives the Angels their first run. 2-1. Another single on another soft liner scores Wells to tie it, but a strong throw from right field by Werth catches Callaspo at third. 2-2 after four.

2. Hits no. 8-9-10-11: Lannan doesn't let the first two on in the sixth. Just gives up a leadoff single, and he gets help on a Gold Glove-caliber play at third by Ryan Zimmerman, who starts a web-gem-worthy 5-4-3 DP with a strong throw to second after a diving stab on a sharp grounder by Mark Trumbo. Alberto Callaspo singles to left with two down. Ian Desmond can't come up with a grounder deep in the hole at short by Peter Bourjos. Bobby Wilson singles to left to score Callaspo on the fourth hit of the frame. 3-2 LA. Lannan's done: 5.2 IP, 11, count'em, 11 hits, 3 R, 3 ER, 2 BB, 2 K's, 102 pitches, 58 strikes.

1. ROY: Still 3-2 Angels after Ryan Mattheus gets the Nationals out of the sixth and Henry Rodriguez comes on with two on and two out in the eighth and strands both of the Angels' runners. The Nationals go down in order in the bottom of the eighth, however, with Roger Bernadina grounding out, Jayson Werth striking out for the 10th time in his last 18 at bats and Ryan Zimmerman rolling a weak groundout to first to end the inning and Ervin Santana's night after 8.0 IP, 5 H, 2 R, 2 ER, 1 BB, 5 K's, 2 HR's, 93 pitches, 64 strikes, 12/3 GO/FO. LA's rookie closer Jordan Walden gets the first two outs of the bottom of the ninth seven quick pitches, but the eighth one isn't coming back!! Danny "ROY" Espinosa takes the Angels' closer deeeeeeeeeeep to right and inside the foul pole!! 3 HR's for the Nats tonight. Espinosa's 15th HR of 2011. 96 mph first-pitch fastball, gone, goodbye. It's tied.*

(ed. note - " * = @NationalsPR: "Danny Espinosa’s 15 HR are the most all-time by a rookie 2nd baseman before the All-Star break (courtesy of the Elias Sports Bureau)."

0. SWING THE BAT!: Brian Bixler's speed gets him on in the Nationals' 10th when he beats out a grounder to second that Maicer Izturis bobbles. Error on Izturis. (He'd make up for it.) A sac bunt by Ian Desmond moves Bixler to second, but pinch hitter Jerry Hairston pops out, and Jayson Werth K's looking, his third strikeout tonight. 3-3 after nine and a half. Nats' lefty Sean Burnett gives up a one-out single, a ground-rule double, an intentional walk and the walk-off winner. Just like that, well, 16 hits later, the Angels finally knock in the fourth run of the game after going 3 for 11 with RISP before Macier Izturis' game-winning single back up the middle. 4-3 Angels final. 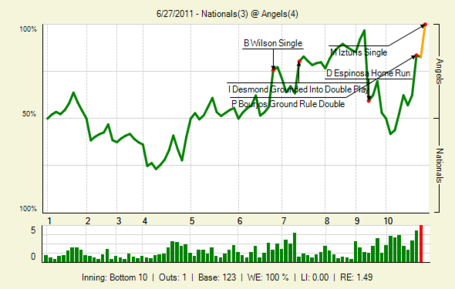