5. Scoreless Innings Pile Up: Washington Nationals' right-hander Jason Marquis gives up a one-out single and two two-out walks to load the bases in the bottom of the first, but then throws an 0-2 sinker inside for a called third strike and out no.3. D-Backs' backstop Miguel Montero is frozen. Arizona starter Ian Kennedy walks the Nats' first baseman Michael Morse on four pitches with one out in the Nats' second, and Morse goes first-to-third™ on a single to right by Danny Espinosa as the Nats threaten after going down in order in the first. Nationals' backstop Wilson Ramos K's looking at a 2-2 curve up high. Alex Cora works a two-out walk out of Kennedy and the Nats load the bases for Jason Marquis. The Nats' pitcher gets hit by a pitch but follows through with a swing and he's called out letting Kennedy off the hook in the Nationals' 20th consecutive scoreless inning. (ed. note - "20.2 innings actually.")...

4. RISP Success?: Roger "The Shark" Bernadina singles to center on a 2-0 fastball from Kennedy, and the Nats' center fielder goes first-to-third™ when Ian Desmond follows with a single of his own on a first-pitch fastball from the Arizona right-hander. Jayson Werth's sac fly to right breaks the Nats' scoreless inning streak. 1-0 Nationals in the third. Ian Desmond gets picked off first. Laynce Nix flies to right, and Washington settles for one. Jason Marquis gives up a leadoff single in the bottom of the third, right after the Nats take a lead, but five pitches and two groundouts later, the D.C. right-hander is out of the inning. Kelly Johnson lines sharply to the Shark in center. Justin Upton grounds into a 6-4-3 DP. 38 pitches, 23 strikes for Marquis through three scoreless.

3. Don't Run On RAMOS!!: Alex Cora's in foul territory five feet behind and to the left of third when he comes to a stop after fielding a sharp Justin Upton grounder. Cora settles and goes to throw, but can't get the ball out of his glove. The moment's hesitation costs him enough time that what would have been a close play is not. Upton's safe at first with one down in the D-Backs' fourth. Marquis gets over to cover on a weak grounder to first from Miguel Montero. Two down. Upton takes off for third when a 1-2 change in the dirt gets away from Wilson Ramos, but the Nats' catcher recovers it and makes a perfect throw on an ill-advised attempt to advance. 1-0 Nats after four.

2. HBP Time: Ian Kennedy loses a fastball inside and hits Jayson Werth with one on and one out in the Nats' fifth following back-to-back bunts by Roger Bernadina (bunt single) and Ian Desmond (sac bunt). Laynce Nix comes up with two on, and Kennedy once again in trouble. Werth doesn't like it. Third time he's been hit in Arizona, and he already missed a game after taking one off the elbow earlier in the series, but the Nats' pitcher have hit Justin Upton three times too, this is outlaw justice!! Laynce Nix pops out. Two down. Michael Morse up with two down, and he gets hit too. No one's tossed even though there were warning issued after Werth's HBP. Bases loaded, and Danny Espinosa grounds to first on the first pitch he sees. Nats 0 for 5 with RISP, 8 LOB after four and a half.

1. Street Field Justice!!: Jason Marquis walks Kelly Johnson with one down in a 1-0 game, and then the Nats' right-hander drills D-Backs' right fielder Justin Upton on the first pitch of the next at bat. Marquis is tossed. Riggleman's tossed. Marquis wants to know why he would hit Upton when he's up a run with a shutout, but the Ump's discretion rules here. That's the fourth time Upton's been hit this series, but it makes no sense to hit a batter here. If Marquis did that on purpose it was a lapse in judgement I don't think a veteran pitcher makes. Tyler Clippard replaces Marquis and strikes Stephen Drew out on three pitches before striking out Chris Young to end the inning with Marquis' lead in tact through six. 1-0 D.C.

0. SLOW TROT: Two more strikeouts for Tyler Clippard in the seventh. The Nats' right-handed reliever throws twelve pitches in the seventh, 19 total, 18 strikes in two scoreless innings after Marquis. D-Backs' reliever Esmerling Vasquez gives up a leadoff double to Laynce Nix in the top of the eighth. One out later, the Diamondbacks' reliever hits Danny Espinosa in the back with a fastball and Espinosa's p••••d. Espinosa and the D-Backs' catcher have words, the Nats are on the top step of the dugout sharing their thoughts. Vaszquez and D-Backs' skipper Kirk Gibson are tossed. Aaron Heilman, who'd hit Werth in the elbow earlier in the series comes on, and Wilson Ramos makes Arizona pay. The Nats' catcher crushes an 0-1 fastball. Deep to left and GONE!! 4-0 Nats. Ramos takes his time rounding the bases, and Diamondbacks' bench coach Matt Williams is steamed.

-1. STOREN WARNING!!: Tyler Clippard gets two outs, two more K's, in the eighth before the D-Backs finally connect. Kelly Johnson gets a meaty heater from Clippard and bounces it off the left field foul pole. Solo HR. 4-1 Nationals. Drew Storen's going to be asked to get a four-out save. The Nats' flat-brimmed closer gets out no.1 with two pitches. Justin Upton grounds out to end the eighth.

The Nationals go down in order in the ninth, and Storen's back out there quickly. Stephen Drew connects with a 1-2 fastball outside and sends it back up the middle past Storen and Desmond, who misses a desperate barehand attempt. One on, 0 outs. Chris Young lines to center for a bloop single that falls in front of a diving Rick Ankiel. 2 on, 0 outs for Miguel Montero. The D-Backs' catcher works the count full, just misses with a long fly to right that curves foul, and ends up walking to load the bases. Juan Miranda goes 3-0, and walks. Run scores, 4-2 Nationals. Storen's done. [Todd Coffey sprints to mound] Coffey vs Melvin Mora, bases loaded. Sac fly to center, 4-3 when Chris Young scores. Miguel Montero takes third. First and third, one out. Sean Burnett vs Xavier Nady. Nady grounds to short, Desmond to Espinosa to Morse double pla...too late. 4-4 game after nine.

-2. Free Baseball: Danny Espinosa doubles with two down in the 10th, and steals third, but Wilson Ramos K's swinging to strand the Nats' second baseman. Sean Burnett's back for the tenth, and he issues a one-out walk to Justin Upton. Stephen Drew grounds into a force at second, two down, but no DP. Chris Young's fly to center ends the 10th. Jerry Hairston starts the 11th with a leadoff single to center off Arizona reliever Joe Paterson. Jordan Zimmermann gets a perfect sac bunt down. Hairston on second with one down. Roger Bernadina beats out an infield single. First and third with one down. Ian Desmond K's swinging. Jayson Werth gets pitched around. Rick Ankiel swings and misses at a 2-0 pitch, but ends up walking in the go-ahead run when Joe Paterson can't find the zone with a 3-1 offering. 5-4 Nats. Michael Morse crushes a pitch from Paterson. Straight center. Grand slam. 9-4 Nationals. Henry "Lightning" Rodriguez retires the D-Backs in order, and the Nats have a split. 9-4 final.

• Miss The Game? The DC Faithful Are Watching... 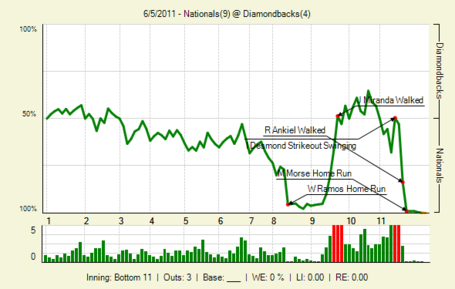