5. Nats vs Cain: The Nationals beat Matt Cain back on May 1st in Nats Park, scoring three runs, two earned on seven hits in 6.0 innings against the the 26-year-old right-hander. Cain, who's (4-4) in 10 starts against the Nats in his career, hasn't actually beaten Washington since 2009, on June 4th, in a rain-shortened second-half of a doubleheader that followed then-Giants' lefty Randy Johnson's 300th win. After an eight-pitch scoreless first, Danny Espinosa bunts his way on for the Nats' first hit with two down in the second. Espinosa advances to second on a pick throw that gets by Giants' first baseman Aubrey Huff. Rick Ankiel K's swinging through a two-strike curve that breaks inside. Cain's through two scoreless in AT&T...

4. Wilson Ramos' Arm: Yunesky Maya needs just five pitches to get through a 1-2-3 first. Nine in the second. Aubrey Huff singled for San Francisco's first hit, but two outs later the Giants' first baseman does Maya a favor, running like there are two down on Cody Ross' fly to short right. Laynce Nix makes the grab and his throw to first doubles Huff up ending Maya's second scoreless frame. The Nats strand their second runner in scoring position in the third. Roger Bernadina works a nine-pitch walk and steals his ninth base in nine attempts, but he's stranded when Ian Desmond flies out to right. 0-0 in the third. Maya surrenders a leadoff single by Brandon Crawford in the fourth, but the Giants' rookie's thrown out one out later trying to steal second. 11 of 23 caught stealing for Ramos, that's a league-leading 48% CS%. Maya retires the opposing pitcher and he's through three.

3. Pitchers Duel: Matt Cain strikes out the side in the Giants' fourth, K's five, six and seven through four scoreless. Maya's right there with him, retiring the Giants in order on 11 pitches in his own scoreless fourth. 37 pitches, 25 strikes, no walks, no K's, 2 hits allowed, and both runners erased. 1-2-3 fifth for Cain, who's up to 65 pitches after five innings of one-hit work. Nine pitches later, Maya's through five and up to 46 pitches with just two hits allowed through the fifth. Top of the sixth, two down. Aaron Rowand cuts off a two-out line drive by Ian Desmond that's got eyes for the gap, holding Desmond to a single. Laynce Nix grounds weakly to second and the Giants' starter's allowed just two hits through six.

2. Dern Stretch: Maya's scoreless outing ends after back-to-back one-out doubles by the Giants' eighth and ninth hitters, backup backstop Eli Whiteside and the opposing pitcher, Matt Cain. Whiteside gets a sharp grounder by third into left and Cain lines sharply to center out of everyone's reach. 1-0 Giants. Maya gives up a one-out walk and throws a wild pitch, but escapes the sixth down just one...Michael Morse singles to right for his first hit in three AB's against Cain ptoday, but he's almost erased on a hit-and-run gone awry when Wilson Ramos swings and misses with Morse headed for second. Stolen base instead. Morse takes third on a Ramos' groundout to short. Danny Espinosa K's swinging. Rick Ankiel...double to right. Cain hangs a first-pitch curve and Ankiel cranks it. 1-1 game after six and a half.

1. Titled Cap, High Socks, Baggy Pants: Sean Burnett gets the first out of the seventh with one pitch, but Cody Ross singles to left with one down. One out later, Ross scores the go-ahead run when left-handed hitting San Francisco shortstop Brandon Crawford triples off the center field wall on a full-count slider from the Nats' reliever. Eli Whiteside singles to center on a 1-1 sinker from Burnett, and it's 3-1 Giants after seven innings in San Francisco. Matt Cain's back on the mound in the eighth, and seven pitches (and one two-out single by Ian Desmond) later, Cain's through the eighth. 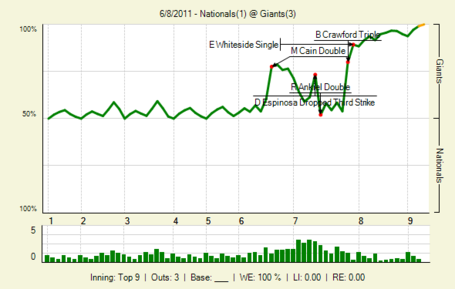