5. Ch-Ch-Ch-Ch-Changes: Out are manager Jim Riggleman, bench coach John McLaren and first base coach Dan Radison. A lot has changed since the Nationals completed a 8-1 homestand with a 1-0 win over the Seattle Mariners on June 23rd. Jim Riggleman resigned that afternoon, immediately after the Nats' 38th win, stepping down in a dispute over his option being picked up for 2012 (to simplify a week's worth of rumors). John McLaren stayed on long enough for the Nationals to transition into the Davey Johnson era on the bench, with Riggleman's bench coach serving as interim skipper for three games before stepping down and accepting a job elsewhere in the organization. Radison, brought on by Riggleman when the former Nats' manager chose his own staff in the fall of '09, was replaced today by Trent Jewett, who was already serving as a coach with Washington. Back on the bench beside Davey Johnson, starting tonight, is Pat Corrales, who had previously served as bench coach under both Manny Acta and Jim Riggleman...

4. Cheese: Tom Gorzelanny hasn't won a start since May 7th when he beat the Marlins with a 7.0-inning, 2-hit, 2-run effort on the road in Florida. Since then Gorzelanny's 0-4 in five starts, with the Nationals 0-5 over the same stretch, and he's spent time on the DL with elbow inflammation since he last earned a win, struggling before and after he was put on the shelf. Last time out against the Chicago White Sox, Gorzelanny allowed just one run on seven hits in 7.0 innings on hill, but the Nats were shut out by the Sox. Tonight in Nats Park, the left-hander surrenders a one-out single to the Pirates' Chase D'Arnaud and a one-out walk to Andrew McCutchen before an inning-ending 6-4-3 gets him through a scoreless first.

Roger Bernadina starts the Nats' first with an opposite field single on a 3-1 pitch from Pirates' right-hander Charlie Morton. Jayson Werth lines to center. Two on. Ryan Zimmerman grounds into a 6-4-3 DP. Two down. A two-out walk to the unwalkable Laynce Nix puts two runners on, but Michael Morse's groundout ends the Nationals' first.

3. E? Morse? No?: Michael McKenry singles on a sharp grounder to short when Ian Desmond's wide throw pulls Michael Morse off the first base bag. Tom Gorzelanny tries to make a quick underhand toss on a bunt by the opposing pitcher, but it gets by Morse at first and allows McKenry to take third. The Pirates' catcher scores on an RBI groundout to first by Alex Presly that makes it 1-0 Pittsburgh in the third. Another error on a toss to the covering pitcher by Michael Morse puts runners on first and third with two down before Gorzleanny strikes out Matt Diaz to end a long frame. The error by Morse is his first since an August 15, 2005 Seattle/Kansas City game during his rookie year with the Mariners. According to word from the press box, that breaks a streak of 214 games and 764 chances without an E by Morse...

2. Getting Morton'd: The Nats have just two hits on the night through four scoreless by Pirates' pitcher Charlie Morton, who's up 65 pitches when he's done with the home-half of the frame. A leadoff walk to Gorzelanny and a two-out error in the 5th on a grounder by Ian Desmond result in the only Nats' reaching base through four and two-thirds, after Laynce Nix's two-out walk in the first, and the 27-year-old Flemington, NJ-born Morton strands Desmond at first and holds the Nationals off the board in the fifth for the 17th inning scoreless inning in a row from the Nationals' offense...Pirates' CF Andrew McCutchen doubles by third into left to lead off the Pirates' sixth, and he takes third on a groundout to short. Gorzelanny gets Lyle Overbay swinging with a 2-2 slider, and gets Ronny Cedeno with the high two-strike cheese. McCutchen's stranded.

1. [CHOMP!!]: Roger "The Shark" Bernadina ends the Nats' scoreless-inning-streak at 17.0 innings when he goes deep off Charlie Morton for a solo HR to start the Nationals' sixth. 1-1 game on Bernadina's 4th HR in the last 14 games...Tom Gorzelanny starts the seventh with 80 pitches on his arm, having allowed six hits, one unearned run and a walk to the Pirates. A leadoff single up the middle by Josh Harrison knocks the lefty down, and a sac bunt moves a runner into scoring position with one down for the second-straight inning. Gorzelanny throws a 3-2 change by pinch hitter Brandon Wood and drops an 0-2 slider on Alex Presley for his eight K of the game, matching his season high, but it's still tied at 1-1 in the 7th.

0. Mister Rick: Rick Ankiel is officially back when he comes on to hit first in the Nats' eighth and singles through the shift off Pittsburgh left-hander Daniel Moskos, who apparently can't get lefties out. Roger Bernadina reaches on a bunt single when the Pirates' second baseman Josh Harrison is late to the bag and drops the toss from the pitcher. Two on, no one out. Jayson Werth sees a new pitcher, Chris Resop, and stares an 0-2 fastball in for a called strike three. Ryan Zimmerman stares at a 1-2 fastball. Two down. Laynce Nix K's swinging through a 2-2 fastball away. Two stranded, still tied at 1-1.

-1. Stairs = H3R0!!: Nats' closer Drew Storen throws a scoreless top of the ninth on seven pitches, and Michael Morse singles back up the middle off Nats' pitcher-for-a-minute Tim Wood to start the bottom of the ninth. The Pirates' right-handed uncorks a wild one that allows Morse to moves himself into scoring position. Danny Espinosa's up when another wild pitch catches the ump on a bounce, delaying the game for several minutes, and the Pirates walk Espinosa to bring Wilson Ramos up with two on. Ramos can't get a bunt down, but his fly to right advances Morse's pinch runner, Alex Cora. 1st and 3rd, one down. Matt Stairs is up and this one is over. Line drive to right and off the wall, ballgame!! 2-1 final. RBI no.2 on the year for Stairs, who improves to 8 for 54 on the year. Nationals are back to .500. Davey Johnson's first curly-W. 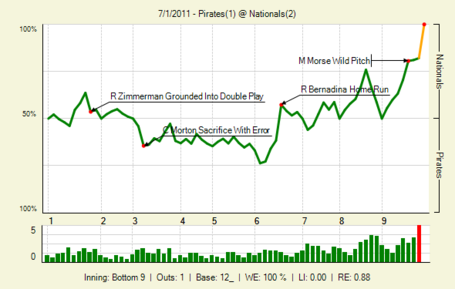