Jordan Zimmermann And The Washington Nationals Win, 2-0 Over The Colorado Rockies.

Share All sharing options for: Jordan Zimmermann And The Washington Nationals Win, 2-0 Over The Colorado Rockies.

5. All About Zim(n): The first pitch Jordan Zimmermann threw today was a 93 mph fastball for a called strike on Rockies' outfielder Ryan Spilborghs. Two pitches later the Nats' 25-year-old right-hander had his first strikeout when Spilborghs stared an 0-2 fastball all the way in for a called strike three. Mark Ellis K'd swinging in the next at bat and after Todd Helton disrupted the flow with a two-out single through short, a weak grounder to first from Troy Tulowitzki ended the Rockies' first after 12 pitches, 10 strikes from the Nats' right-hander. Rockies' right-hander Jhoulys Chacin got through his own 12-pitch first and Zimmermann was quickly back on the mound, striking out Colorado left fielder Cole Garner and infielder Ian Stewart after a sharp liner to right from Seth Smith ended up in Jayson Werth's glove. Three quick outs, 1 hit allowed, 4 K's collected through two innings. 26 pitches, 19 strikes...

4. Support Your Zim(n): Colorado catcher Matt Pagnozzi doesn't agree, but the full-count curve Jordan Zimmermann drops in on the low outside edge is called strike three. Zimmermann's 5th K from the first eight batters. The opposing pitcher pops to second and Spilborghs sends a grounder out to Danny Espinosa, whose throw to first ends Zimmermann's third scoreless frame. 39 pitches, 28 strikes, 5 K's and one hit allowed through three. Zimmermann will have to continue to be sharp, however, because the Nats are getting no hit through three by Jhoulys Chacin. Two groundouts and pop to short center that Ian Desmond hustles out to catch, making a slick over-the-shoulder grab, and the Nationals' starter is through four scoreless and in need of support in another strong start. 50 pitches, 35 strikes through four. Ryan Zimmerman (no relation, one "n") breaks up Jhoulys Chacin's no hit-bid, singling to left with two down in the bottom of the fourth, but a sharp Laynce Nix liner to first ends another scoreless frame.

3. Zim(n) Can't Be Stopped: Rockies' third baseman Ian Stewart reaches safely on a two-out bloop single to left that falls in over Ian Desmond and in front of Laynce Nix, but Jordan Zimmermann's unfazed as he gets a fly to left from Matt Pagnozzi to strand the Colorado runner and complete his fifth scoreless frame. 7 pitches and three outs later, Zimmermann's back on the mound, and he gives up a leadoff single through second to the opposing pitcher who sends a 94 mph full-count fastball back up the middle. Ryan Spilborghs sends one back up the middle too, but Ian Desmond's waiting for it, 6-4-3, the Nats turn the DP. Mark Ellis pops out to second, 6.0 scoreless in the books, 82 pitches thrown, 60 for strikes by the Nationals' right-hander.

2. SHARK SINGLE!!: Ian Desmond crushes a 1-0 slider from Jhoulys Chacin, and sends a screaming grounder toward third and off Rockies' third baseman Ian Stewart. Troy Tulowitzki tries to play the carom, but Desmond's too quick. Infield single to start the Nats' sixth when it's ruled a hit. Jordan Zimmermann gets down a perfect sac bunt and the Nats have their first runner in scoring position, and Roger Bernadina cashes it in with a broken bat liner to right that brings Desmond in and puts Washington up 1-0 after six innings in Nationals Park. Jordan Zimmermann gives up a leadoff single to Todd Helton in the sixth, and after he pops Troy Tulowitzki, he's lifted and receives a nice ovation after 6.1 IP, 4 H, 0 R, 0 ER, 0 BB, 6 K's, 88 P, 64 strikes...Ryan Mattheus comes on in relief and gets a fly to left from Seth Smith before striking out Cole Garner out (twice) to end the seventh. Still 1-0 Nationals and they've done it on 3 hits off Chacin.

• Davey Johnson: "[Zimmermann] had 88 pitches through six and a third, I mean, I would say next year he's capable of going 120 pitches and 200.0 innings. You couldn't ask for anything more after what he's went through the last year. A lot of the guys, when I came out there, asked me, all of them, 'Why did you take him out?' or something like that, they didn't ask me in that form...I said, 'Well, he's only got a few innings the rest of this year, and a young pitcher that pitches this great, I'm not giving him a chance to even come close to losing it."

1. All-Star Sighting: Tyler Clippard takes over in the eighth, trying to make Jordan Zimmermann's one-run lead hold up. Clippard gets up 0-2 on Ian Stewart, who fouls off a two-strike fastball and singles to right on an 0-2 change. Leadoff runner on. Rockies' catcher Matt Pagnozzi bunts the runner over in front of pinch hitter Ty Wiggington, who works the count full and takes a full-count change outside for ball four. Jason Giambi works the count full and K's looking at an 81 mph change. Two down. Mark Ellis flies out to Rick Ankiel in center, and it's 1-0 Nats after seven and a half. Make that 2-0! The Rockies get the first out of the Nats' eighth when Ian Desmond K's looking, and the Rockies replace Matt Lindstrom with left-hander Matt Reynolds when Rick Ankiel steps to the plate. Ankiel gets hold of a 1-1 slider and drives it to right and out!! Over the out-of-town scoreboard and into the stands, 2-0 Nats after eight. Ankiel's first HR off a lefty since 2008.

0. STOREN WARNING!: No. 22 is out looking for save no. 23 in the ninth. Drew Storen vs Todd Helton: Fly ball to center. One down. Storen vs Tulo: Pop to Desi at short. Two. Storen vs Seth Smith: Double to the wall in left. Storen vs Cole Garner: Strike three swinging...The Nats win, 2-0 final. Storen's 23rd save, the Nats' 46th win. 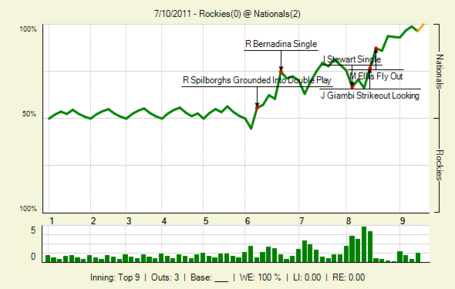