2011 All-Star Tyler Clippard has established himself as probably the best reliever in the Nationals' bullpen, and easily among the elite relief pitchers in all of baseball.  I don't mean to run down Drew Storen by saying this: Storen's a strong reliever, but Clipp has been out of this world this season.

For instance, you know those graphs I put up after each game?  They measure a stat called WPA, which adds up how much a player comes through in big situations: getting the clutch hit for the go-ahead run, or getting big outs in a tight game.  Tyler leads all MLB pitchers in WPA, with 3.60.    He's been on or near the top of that leaderboard all season.  You might expect this, given his role:  he only pitches in big spots, usually with a tie or a lead, which will pump up his WPA a bit.  Of course, he's succeeded much more often than he's failed in those big spots, too.

But why is this?  On the surface of things, Tyler is a skinny guy who only throws 93 mph, even if he does throw four pitches (fastball, curve, slider, change) with a delivery that could best be described as "confuzzling."  I mean, he's just another mediocre starter who converted to a reliever, right?  Okay, his normalized ERA (ERA-) is 13th in the NL; it's more than 50% better than league average. But the Nats have better defense this year, and ERA is even screwier for relievers than for starters.  His normalized defense-independent pitching (FIP-) is only 10% better than league average--Jordan Zimmerman's is 30% better than average!

What gives? As Debby Taylor might ask, just how good is Tyler Clippard?  And as we might ask here on FBb, what's the secret to his success?  Some answers after the jump.

A portrait of dominance?

On the surface of things, Tyler looks decent but not dominant.  He strikes out just over 11 batters per 9 IP (33% of all batters faced), which is 16th in the NL.  However, he walks 3.16 per 9 IP--better than average, but not elite.  He gives up the long ball at a rate of 1.3 HR/9 IP, a bit worse than average.  Tyler's 0.86 WHIP is pretty shiny (5th in the NL).  Overall, he's about equally effective against righties and lefties: the lefties get a few more hits, but they strike out more and walk less than the righties.

To get a real picture of the Clippard Success, consider a stat called RE24.  This stat adds up how many runs a pitcher saves each time he faces a batter (compared to the current runs expected to be scored, based on runners and outs).  RE24 removes the "close game" element that pumps up Clipp's WPA.  Since you add RE24 for every batter that a pitcher faces, starters dominate the leaderboard--they face the most batters. Nine out of the top 10 NL pitchers in RE24 are starters, and the other is Tyler Clippard (7th, between Paul Maholm and Johnny Cueto).  Clippard is ahead of Maholm, in spite of facing less than half as many batters (191 versus 504).  A pitcher's job is to prevent runs, and Tyler has not only prevented as many runs as some very good starters, he's preventing them about 50% faster than the RE24 leader Justin Verlander! Verlander has 38.55 in 576 BF, about double Clippard's 19.39, but it took him three times as many BF (576) to do it. That's dominant.  It also speaks well of his success that he's been able to maintain it over 51.1 IP so far this season.

How does he do that?

In spite of the sample size of nearly 200 batters faced, the first thing I always think when I see so much success is, "he's getting lucky."  Taking a look at Tyler's BABIP, we see that it's an astonishingly low .180 (5th lowest in the NL), which means that 82% of his pitches that get hit end up being caught for outs.  League average is about 0.295, so that suggests some unsustainable good luck.  However, it might not be all luck--Clippard is a fly ball pitcher, and fly balls that stay in the park tend to get caught and make outs.  Tyler may be giving up a career-high 17.9% line drives this season (which tend to go for hits), but he's getting more than three times as many fly balls as grounders (62% to 20%), and fully 24% of those fly balls are infield pop-ups (pretty much automatic outs).  If you use that batted-ball profile to calculate an "expected" BABIP, Clipp's should be .217!  Sure, that's not as good as what he's managed this season, but it's still well below average.  In fact, it would be 16th best in the NL.  Take a look at his BABIP by hit type:

That's right, of the 62% of his hits that were fly balls this year, none fell in for hits (not counting the HRs, of course).  His BABIP on the grounders is below league average, too, indicating that when batters do get one on the ground, it's weak contact.

Okay, so we know that Clippard strikes out more than a batter an inning, and he gets a lot of fly balls for easy outs from the batters he doesn't strike out.  How does he do that?  Well, he gets a lots of swinging strikes--about 17% this year, a career high.  We know he loves to throw the high fastball that hitters will either chase out of the zone for a strike or pop up.  But he mixes in his three other pitches, too, and the best of all his pitches is his change-up.  This year, Tyler's thrown his change more than any prior season (about a quarter of the time), and it's gone from an average pitch to a well-above-average pitch.  Take a look at his pitch outcomes:

Now, here's something interesting.  Clippard gets plenty of swing-and-miss on his fastball--a bit more than a third of the time to righties and lefties.  But against righties, he gets even more whiffs on his changeup plus more fly balls, no HRs, and they swing at it more often! It's like an irresistable invitation to a hitter to get himself out.  Lefties are able to hit the change a little better than the fastball, but they don't square it up as well, getting fewer line drives.  Take a look at the pitch trajectories:

The change and the fastball look pretty much the same coming out of his hand, but the change ends up about two feet lower than where the batter thinks it's going (compare the red squares and the purple squares).

How effective is Tyler's change?  It is +3.90 runs better than average per 100 pitches thrown.  That means that it's better than Henry Rodriguez' corkscrew slider (+2.28), it's better than Drew Storen's jittery-laser fastball (+2.08), and it's better than Livo's ridiculously baffling curve ball (+2.55).  The only pitch on the staff better than Clippard's change is actually Sean Burnett's change (+4.47). Even so, Tyler gets a lot more out of his change than Burnett, throwing it twice as often as Sean does.  Of course, how is his change so good?  That's a topic for another post.

I'll close with a plot of where Tyler throws his pitches and what happens to them. 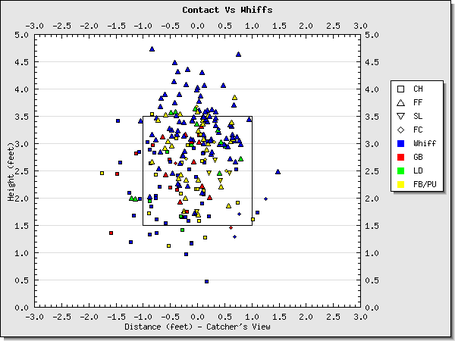 Look at those blue triangles of people whiffing on the fastball, mostly concentrated in the upper half of the zone.  Some of those pitches are a foot or more out of the zone!  The blue squares are whiffs on the change, mostly in the bottom half of the zone.  A 93-mph fastball and an 81-mph change may not sound like much, but the change in speed and location is enough to keep hitters off balance and make Tyler Clippard one of the best relievers in the NL.