5. Two Approaches To A Leadoff Runner Reaching: Roger "The Shark" Bernadina [CHOMP]'s down on another stolen base (his 14th in 16 attempts) after he was "hit by a pitch" from Jair Jurrjens in the first inning of this afternoon's game. Three outs later, after a Danny Espinosa K, after a Ryan Zimmerman grounder to short gets Bernadina caught off second and tagged at third and after Michael Morse flies to left, the Washington Nationals have wasted a runner on second with no outs. The Braves' leadoff man Jordan Schafer walks on four pitches from Nats' lefty Tom Gorzelanny, steals second on the pitcher (by most accounts) and takes third when Nationals' catcher Jesus Flores short-hops Danny Espinosa at second and the ball rolls into center. Martin Prado singles Schafer in for a 1-0 Braves' lead, and one-out later back-to-back walks (the second walk the result of a hand-to-mouth-to-baseball ball four called on Gorzelanny) Atlanta loads the bases with one out in the bottom of the first. A wild pitch by Gorzelanny that bounces in front of the plate and off Flores allows the second run to score. 2-0 Braves after one. Gorzelanny throws 33 pitches before he's out of the first...

4. "A Little League HR!" - RobBobs: A bizarre inning that starts with Ian Desmond being walked before he's thrown out when he "misses" a sign that the pitcher's bunting, only gets odder. Gorzelanny's left at first when the Braves can't complete a DP after throwing out the lead runner (Desmond) at second on the pitcher's sac bunt attempt. Desmond talks it over with Davey Johnson as he heads back to the dugout. Roger Bernadina's up next, and the Nats' center fielder [CHOMP!]s down on a 1-1 change, sending a long fly to right center. Gorzelanny tries to score from first and gets into a collision at home. He's hurt. But the ball gets away from McCann and Gorzelanny and Bernadina score. Triple and an E, 2-2 game. Danny Espinosa singles, Ryan Zimmerman walks, Two on, one out, but they're both stranded when Jurrjens throws fastballs by Michael Morse and Jayson Werth for back-to-back K's. 2-2 in after two in Turner Field..

3. Nats' Bats Explode: Gorzelanny tries to throw a few pitches, but he's done after the collision at home. Henry Rodriguez replaces the soft-tossing left-hander and dominates the Braves' batters in a quick 1-2-3 third he's through on 11 pitches, 7 strikes. Laynce Nix starts the top of the fourth with a single to left on a 1-1 slider from Jair Jurrjens. Jesus Flores rips into a meaty 1-1 fastball from Jurrjens and doubles to left sending Nix around to third, and both runners score when Ian Desmond shoots a 2-2 fastball into the right-center grass for a two-run double and a 4-2 Nationals' lead. Desmond gets thrown out at third on a stolen base attempt when he overslides the bag after beating the throw and it looks like Roger Bernadina's two-out single in the next AB will be wasted...until Danny Espinosa drives a hanging 1-1 slider to center and...off the top of the wall!! RBI triple by Espinosa, 5-2 Nats. Ryan Zimmerman does the same, well, doubles at least, not off the wall, Espinosa scores and it's 6-2 Nationals over the Braves after four.

2. Too Long For Henry: Henry Rodriguez is getting stretched out to make up for Gorzelanny's early exit. Rodriguez gives up a leadoff double to Wilkin Ramirez and hits Jason Heyward in his third inning of work in the fifth. Two on, no outs, and a sharp single by Jordan Schafer bounces off Michael Morse's glove. Wilkin Ramirez scores to make it 6-3 Nationals. One out later, Rodriguez is lifted for a lefty, Sean Burnett, who comes on to face Brian McCann. LEFTY VS LEFTY. Two sinkers later it's a tie game. McCann crushes an 0-1 fastball from Burnett and sends it soaring out to right and over Jayson Werth and the wall. 3-run HR by the Braves' catcher 6-6 game in the fifth. Still no outs. Burnett walks the next batter he faces, Freddie Freeman, and gives up a single to Dan Uggla that moves the runner around to third so he scores on an Alex Gonzalez groundout, 7-6 Braves after five.

1. Right Side Danny!!: Sean Burnett hits with one down, so he's going to stay on after a rough inning on the mound. The Nats' left-handed reliever singles to left, and one out later scores when Danny Espinosa crushes a first-pitch fastball from Braves' lefty George Sherrill. Two-run HR, 8-7 Nationals after six.

• NatsInsider's Mark Zuckerman (@MarkZuckerman): Danny Espinosa's 17 homers are the most ever by a Washington second baseman."

0. Clippard x 2: Sean Burnett throws a scoreless sixth, and Tyler Clippard retires the first five batters he faces in a scoreless seventh. Clippard gets two outs in the bottom of the eighth, but a 1-0 fastball to Nate McLouth is a little too close to the middle of the plate outside and the Braves' outfielder ties it at 8-8 with one swing, sending a solo shot soaring out to right and two rows back over the wall. McLouth's 4th HR of the year, and first since May 14th. Jayson Werth just watches it. The Braves tie it at 8-8 after eight. The Nationals threaten in the ninth with Zimmerman walking and Michael Morse singling to put two on with two outs, but Jayson Werth's groundout ends the frame.

Nats' reliever Ryan Mattheus gives up a leadoff walk, but a sac bunt and some bad baserunning allow him to get two outs with a runner on second. Martin Prado's on after grounding into a fielder's choice where Desmond chose to throw out the lead runner at third. Prado steals second, so the Nats walk McCann, and Freddie Freeman make them pay, lining to right to drive Prado in and win it. 9-8 Braves on the walk-off single. Nats blow one they should have won, go 3 for 10 with RISP and strand six in a one-run game...Werth 0 for 5 with 4 LOB, is the only hitless starter. 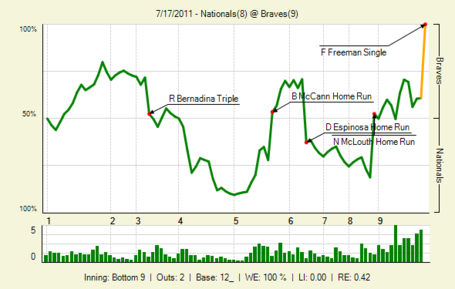