Michael Morse Hits One Over The Tracks! 5-2 Washington Nationals Over Houston Astros.

Share All sharing options for: Michael Morse Hits One Over The Tracks! 5-2 Washington Nationals Over Houston Astros.

5. HE WENT!!: Don't mind the title, there. Nats fans know what it means. The Nationals are back in Minute Maid Park tonight and they're facing 20-year-old Houston Astros' right-hander Jordan Lyles, who's looking for his first major league win in nine MLB starts. Nine pitches and three quick outs into his ninth outing he's got a scoreless frame against the offensively challenged Nats.

Washington's swinging early and often against the Astros' '08 1st Round pick (38th overall) who was drafted with a supplemental pick they received for losing lefty Trever Miller to Tampa Bay. After two scoreless Lyles has only thrown sixteen pitches, getting through the second on seven pitches including three-straight to Jayson Werth to get the Nationals' outfielder swinging through a 90 mph cutter...

4. After Jason Marquis strikes out the side around a one-out walk in the Astros' second. Jordan Lyles is back on the hill, and the product of Hartsville High School in Hartsville, South Carolina retires batters seven, eight and nine on the night to put the Nationals down in order the first time through the lineup. After Jason Marquis records K's no. 4 and 5 on the night to strand Astros' catcher Carlos Corcoran after a leadoff single, Lyles puts the first Nats' first runner on when he walks Roger "The Shark" Bernadina, but Astros' infielder Angel Sanchez robs Danny Espinosa of an infield hit, fielding a sharp grounder behind second and tossing with his glove to Jeff Keppinger who turns a 6-4-3 DP to erase the only runner who's on through four after Ryan Zimmerman's inning-ending groundout to third.

3. Morse Crush: The Nationals' first hit of the night comes on the first pitch of the 5th when Michael Morse gets hold of a first-pitch curve from Lyles and sends soaring out to left out near the train tracks or windows, whatever's up there, it's gone! Morse's 16th HR of 2011 gives the Nationals a 1-0 lead. MORSE CRUSH! Seriously, that might not have ever landed if the windows were open. The Nats give the lead right back when Jason Michaels doubles to start the Astros' fifth and scores from second one-out later when Astros' catcher Carlos Corcoran lines one by Morse at first and into the right field corner. 1-1 game, Marquis strikes out the opposing pitcher for his seventh K and the seventh groundout of the night off Michael Bourn's bat ends the fifth.

2. What Do The Kids Call Him?: The Nats go down in order, six-straight after the Morse HR and Jordan Lyles is through six innings with a one-hitter on 69 pitches, 49 strikes. Jason Marquis gives up a leadoff single to Astros' shortstop Angel Sanchez in the home-half of the sixth, and Sanchez scores two outs later on an El Caballo RBI double into the left fielder corner. 2-1 Houston on Carlos Lee's 26th double of 2011. Lyles gets the first out of the seventh when he gets Danny Espinosa looking on the ninth pitch of a long at bat by the Nationals' second baseman. 78 pitches for Lyles after that at bat, and two pitches later he throws a 1-0 change outside to Ryan Zimmerman who goes with it and pushes a line drive over the right field wall for the Nationals' second hit and second HR, oppo-boppo, 2-2 game on Ryan Zimmerm--THE KIDS CALL HIM ZIM!! THE KIDS CALL HIM ZIM!! No. 5 on the year for Zimmerman. 2-2 in Minute Maid Park.

1. Rizzo And Bourn?: Jason Marquis gets three-straight groundouts to short, all of which Ian Desmond handles, and he's got 8 K's and 9 groundouts from the 27 batters he's faced through 7.0 IP. Jordan Lyles starts the eighth at 94 pitches, and nine pitches later he's got a 1-2-3 inning on the board in what's still a 2-2 game. Michael Bourn singles off Jason Marquis to start the Astros' eighth, but after he's bunted over he's stranded at second and Marquis has 9 K's in what's still a 2-2 game after eight in Minute Maid. Roger Bernadina reaches on a single to right to start the ninth, and he too is bunted over with Danny Espinosa getting it down. Ryan Zimmerman battles Lyles in a six-pitch at bat, and singles through second on a 2-2 slider that scores Bernadina from second, 3-2 Nats. Lyles leaves after 113 pitches, 80 strikes, and there will be no W for the 20-year-old tonight.

0. STOREN WARNING!!: The Nationals add to their lead in the top of the ninth when Astros' reliever Wilton Lopez gives up a single to Michael Morse and base-loading one-out walk to Jayson Werth. Laynce Nix sends a high chopper over first and into right to drive two runs in and give the Nationals a 5-2 lead. Watch for yourself how Jayson Werth makes the last out of the inning...ugh...Drew Sotren enters the game in the ninth with a three-run lead. El Caballo Carlos Lee lines to left-center and it drops in-between Rick Ankiel and Roger Bernadina for a leadoff double to start the Astros' ninth. Storen strikes out Jason Michaels, gets Chris Johnson looking and Carlos Corcoran goes down chasing, 1-2-3 after the leadoff double. Nationals win, 5-2 final. Save no. 25 for no. 22. 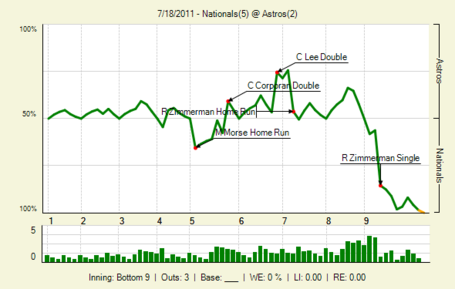