4. Desi's Ready: Ian Desmond told Nats' Skipper Davey Johnson he was ready to return to the top of the order. Johnson told ESPN 980's Kevin Sheehan and Thom Loverro on the Sports Fix this afternoon that Desmond had been, "... kind of hinting, 'Skip, move me down, I'm feeling I'm ready.'" "Well," Johnson said he'd told his shortstop, "I think you're not ready, but I'm going to give you a shot anyway." Desmond works a seven-pitch at bat in his first trip to the plate, and doubles to right field off Happ in the Nationals' first and Michael Morse and Jayson Werth both walk in front of Wilson Ramos, whose fly to right strands three runners. Happ's through the first on 29 pitches. Jordan Zimmermann throws two two-strike mid-90's fastballs by two Astros' batters and takes a line drive off his shin on the way to his own scoreless first. 18 pitches, 15 strikes and one less inning of watching the right-hander this season...

3. Crawford Boxes Eat Two: Jordan Zimmermann gives up a one-out single to Carlos Lee in the bottom of the second, and one out later he throws an 0-2 fastball to Clint Barmes that the Astros' shortstop hits far enough to left to get it into the Crawford Boxes. [Weak] two-run HR, but at least it's a little more respectable than the line drive Michael Morse tucks into the first row of the left field bleachers. J.A. Happ walks Ryan Zimmerman on five pitches with one down in the third (after striking Zimmerman out in the Nats' 3B's first AB), and the Astros' lefty leaves a 1-2 curve up for Morse to pull 316ft to the 315ft wall in left field. Morse's 18th HR ties it at 2-2 in the third.

2. 4-Run 4th: The Houston Astros collect five hits and four runs off Jordan Zimmermann in the home-half of the fourth. Carlos Lee's 2 for 2 after he hits a 95 mph 2-2 fastball back up the middle. El Caballo goes first to third on a Chris Johnson double and scores on Clint Barmes' RBI single to center which gives the Astros' SS 3 RBI's in a 3-2 game. With Chris Johnson on third, Houston's catcher Humberto Quintero gets a safety squeeze down, and the Nats' starter doesn't get over to cover first in time, so it's an RBI bunt single and a 4-2 Houston lead. One out later Michael Bourn collects hit no. 5 of the frame and drives in runs five and six of the night to make it 6-2 Astros before Zimmermann escapes the frame, 28 pitches after the Astros' fourth started.

1. Love Them Boxes: The Nationals knock J.A. Happ out in the sixth and get back into the game. Wilson Ramos hits a 2-2 slider to center after a seven-pitch AB and one out later he scores on Jerry Hairston's 3rd HR of 2011. Hairston pulls a 1-0 fastball from Happ into the first row of the Crawford Boxes in left for a two-run HR that gets the Nats within two of Houston at 6-4. Alex Cora walks with one down, takes second on a wild pitch from Astros' reliever Fernando Rodriguez, and scores on a two-out RBI single to center by Ian Desmond, who sends a 94 mph 2-2 fastball back up the middle to get the Nationals within one after five and a half in Houston. 6-5 Astros lead.

0. [Coffey Sprints To Mound]: Nats' right-hander Todd Coffey's two outs into the sixth when he gets himself into trouble, surrendering a single and a walk to Humberto Quintero and pinch hitter Andrew Bogusevic, respectively. Michael Bourn goes all the way the other way with 2-2 fastball outside and drives in the Astros' seventh run to give Houston back its two-run lead. The Nationals pull back within one when Michael Morse doubles for the second time tonight and the 20th time this season. Ground-rule double to right center for Morse, and Jayson Werth connects for a line drive single to left. Wilson Ramos grounds back up the middle off the pitcher and into a 1-4-6-3 DP, but Morse scores from third and it's 7-6 Astros after seven innings in Minute Maid Park.

-1. 6 Outs To Get 1 Run: Jerry Hairston singles to left field and off the wall to start the Nats' eight, but El Caballo Carlos Lee plays it, uh, perfect-Lee and makes a throw to second that beats Hairston to the bag. Angel Sanchez with the catch and tag, and Hairston's out trying to stretch a single in a one-run game. Still 7-6 Astros after seven and a half. Ryan Mattheus throws a quick scoreless bottom of the eighth. Ian Desmond pops up to the infield on a 2-0 pitch from Houston right-hander Mark Melancon. Ryan Zimmerman drives a 2-2 pitch to right and just foul, inches from a game-tying HR. Zimmerman works the count full and grounds out to second. Michael Morse up with two down. Melancon hits Morse, the first HBP of the year for the right-hander, so it will be up to Jayson Werth. Rick Ankiel on to run. Werth walks to bring Wilson Ramos up. Ramos K's chasing. Astros win, 7-6 final. Nats 2 for 10 with RISP, 9 LOB. 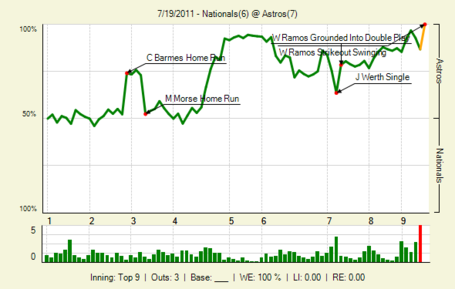