Share All sharing options for: Washington Nationals Get HR From John Lannan, Grand Slam By Jerry Hairston In 7-2 Win Over Los Angeles Dodgers.

5.Lannan's Looking Hitterish?: Ryan Zimmerman took a first pitch fastball from Hiroki Kuroda to left field in Dodger Stadium for a two-out single in the top of the first, then the Nats' third baseman stole his second base of the season ahead of a late throw to second by LA backstop Rod Barajas before scoring on a two-out Michael Morse double. 1-0 Nats. Morse battles Kuroda for seven pitches and rips into a 2-2 slider driving it by Juan Uribe at third to bring Zim around and put the Nationals up early in L.A. John Lannan gave up a two-out hit in the Dodgers' first when he gave Andre Ethier a little too nice a 1-2 fastball which the Dodgers' outfielder lined to right before he was stranded when Matt Kemp struck out. Lannan, who had just 2 hits in 35 at bats before tonight, with both hits coming in his last start when he went 2 for 3 in Atlanta after he began 2011 0 for 32. Lannan connects with a 1-2 fastball from Kuroda and lifts it to right, and out for his first HR in 223 career at plate appearances. 3-0 Nats on John Lannan's first MLB HR.

"And this thing, believe it or not, is over the scoreboard," Vin Scully.

4. Wasted Opportunity: Jayson Werth struck out in his first at bat, chasing a high fastball outside from Kuroda, but the Nats' right fielder singles to center the second in his second at bat, going back up the middle with a 1-0 fastball. Werth moves into scoring position when Laynce Nix walks. Kuroda's first free pass of the night brings Wilson Ramos up, but a fly to right by Ramos puts the pressure on Ian Desmond. Laynce Nix tries to take second (to avoid the DP? Force a bad throw?) whatever the thinking, Nix is thrown out at second, so when Desmond walks it's John Lannan up with runners on first and third with two down. Can Lannan do it again? No, you're asking too much...3-0 Nats after three and a half...

3. 2 E's On Desi: John Lannan issues his fourth walk of the night to start the bottom of the fourth inning, putting Matt Kemp on. Juan Rivera's double moves Kemp around to third, and a single up the middle by Juan Uribe gets under Ian Desmond's glove. Error on Desmond, the 14th error of 2011 by the Nats' SS. Desmond tries to play the short hop, but the ball dives low. Seemed to be thinking of throwing home. An infield pop gets by Barajas gets Lannan his first out, and he might have a double play on a Jamey Carroll grounder to shor---Desmond bobbles it. No DP, not even the force. Desmond's tossing it before he has the ball and a sure-thing DP turns into an E. No. 15 on Desmond, runners on 1st/2nd with one out, but Lannan retires the opposing pitcher on a sac bunt and Tony Gwynn on a groundout to preserve his lead. 3-2 Nats after four.

2. DIY Lannan: Lannan retires the Dodgers' in order in the sixth, setting down the sixth, seventh and eighth-straight LA hitters and collecting his sixth K on the night. The Nats' left-hander has a two-hitter going through six and a 3-2 lead when the Nationals step in against Kuroda in the 7th. The Dodgers' right-hander's retired eight-straight of his own before he issues a one-out walk to Ian Desmond and the Nationals leave Lannan in to hit with a runner on in a one-run game. Lannan comes through with a single through short into left. Desmond moves to second. Kuroda's done. Lannan's 2 for 3 with a HR and a single. The Dodgers bring on lefty Scott Elbert. Davey Johnson counters, hitting Jerry Hairston for Roger Bernadina. Hairston pops out. Two down. Kenley Jansen spins Espinosa around to the left side, and strikes him out. Still 3-2 Nats.

1. Burnett Non-Fail?: John Lannan starts the bottom of the seventh at 95 pitches, but he only throws six more, retiring Jamey Carroll before surrendering a one-out double to pinch hitter Aaron Miles, who bounces a fly off the left field wall. Lannan's done. 6.1 IP, 3 H, 2 R, 1 ER, 4 BB, 6 K's, 101 pitches, 62 strikes. Davey Johnson brings on Nats' left-hander Sean Burnett. Miles takes third on a groundout by Tony Gwynn, but he's stranded there when Rafael Furcal K's looking at a 2-2 sinker from Burnett. Still 3-2 Nationals. LA right-hander Kenley Jansen strikes out the side in the Nats' eighth and Nats' All-Star Tyler Clippard sets the Dodgers down in order in the bottom of the inning so it's 3-2 Washington heading into the 9th in LA.

• Vin Scully on the Hairston HR: "And a high drive into deep left field and that one is....Gone! A grand slam home run by Jerry Hairston, the third of his career and the Nats break it wide open and lead it 7-2. A long time between slams, 2005 and tonight." 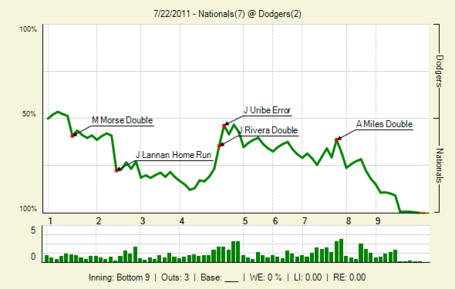