Los Angeles Dodgers Tie It Late, Win 7-6 Over The Washington Nationals In The 9th.

Share All sharing options for: Los Angeles Dodgers Tie It Late, Win 7-6 Over The Washington Nationals In The 9th.

5. NewWerth: The Washington Nationals bring a .219/.303/.349 slash against left-handed pitchers into tonight's game against the LA Dodgers and lefty Ted Lilly. Right Side Danny Espinosa and Ryan Zimmerman hit back-to-back singles in front of Nats' cleanup man Michael Morse in the top of the first and the Nationals' slugger sends a 2-2 slider from Lilly to right over Andre Ethier's head to drive Espinosa in and make it 1-0 Nats. Jayson Werth's up next, and he brings a .207/.342/.333 slash with RISP into the AB, but that was the old Werth. Mid-July Werth's in the midst of a streak of sorts, having collected five hits in his last twelve at bats and now six in thirteen when he crushes a 1-0 curve. 2-RBI double to the left of center, Zimmerman and Morse score and it's 3-0 Nationals after a half...

4. Zim Double Pumps, Ramos Drops It: The first batter Tom Gorzelanny faces tonight, Rafael Furcal, connects for a line drive single to right to start the Dodgers' first after the Nats gave Gorzelanny a three-run cushion before he even took the mound. The Nationals' left-hander gets what could be a DP grounder to third if the Nats rush, but Ryan Zimmerman double pumps the throw and doesn't even get the force at second. Two on, 0 outs. Andre Ethier singles to left to load the bases with one down and a sac fly by Matt Kemp gets LA on the board, 3-1 Nats.

Tom Gorzelanny gives up another single to start the second, with James Loney lining to right on a 1-1 fastball. One out later, Dioner Navarro singles to right sending Loney around to third. Ted Lilly drops down a bunt and a charging Zimmerman throws to first for one out, but Loney breaks for home. Zim throws to Espinosa covering first and the Nats' shortstop at second throws home in time to get Loney, if only Wilson Ramos could have held it. The ump looks closely, sees Ramos dropped it and signals, "He's safe!" 3-2 Nationals after two.

3. Zimmer's Running: Ryan Zimmerman's 2 for 2 on the night after he singles to right to start the Nats' third. Zimmerman's running again and he steals his third base of the year and second in two nights. Ted Lilly's notoriously bad at holding runners. The Dodgers walk Jayson Werth intentionally after Michael Morse flies out and Wilson Ramos is up with two runners on and one out. Ramos flies out, deep enough for Ryan Zimmerman to take third, but he would have scored anyway. Rick Ankiel fouls off three 0-2 pitches and drives a double to right and into the corner, two runs score, 5-2 Nats. Ian Desmond's two-out single off Lilly makes it 6-2. Ankiel's got third stolen on Lilly and he just keeps going as Ian Desmond beats out an infield hit. Hustling all around.

2. Gorzo Gives Back: A half-inning after the Nationals give Tom Gorzelanny a four-run lead the Nats' lefty gives almost all of it back. Matt Kemp takes a 1-0 fastball to deep center and over Rick Ankiel's head for a one-out double. Juan Rivera flies to center on a 1-0 change for a bloop single that sends Kemp around to third. Kemp scores to make it 6-3 on a sac fly by James Loney. Juan Uribe battes Gorzelanny in a 6-pitch at bat and comes out of it with a two-out single to center. Two on, two out and Davey Johnson has Gorzelanny walk Dodgers' backstop Dioner Navarro to bring the opposing pitcher up and Lilly connects with a 2-1 fastball and rips a two-run double to right that gets the Dodgers within one, 6-5 Nats.

1. Long Night For Pen: Ross Detwiler replaces Gorzelanny after he lets the Dodgers back in the game, giving up eight hits and 5 runs in 3.0 IP over which he throws 66 pitches. Detwiler proceeds to throw 2.2 scoreless to keep the Nationals' one-run lead in tact. One hit and one walk allowed for the Nats' '07 1st Round pick, who throws 42 pitches and gets the Nationals into the sixth with the lead when a two-out single by Andre Ethier ends his night. Henry Rodriguez gives up a two-out single and a base-loading two-out walk before retiring James Loney on a groundout to second. Still 6-5 D.C., but Rodriguez is brought out for the seventh and he implodes. Dioner Navarro walks with one down and the catcher's pinch runner Eugenio Velez steal second, moves to third on a groundout and scores on a wild pitch to tie it at 6-6 after seven.

0. Not Again: Mike MacDougal pitches a quick 1-2-3 eighth and Dodgers' right-hander Javy Guerra takes care of the ninth. The last eleven Nats go down in order, with Ross Detwiler's one-out single (and second hit ever) one of only two Nats' hits after they score six in the first three innings. Ryan Mattheus throws a scoreless eighth, but is in trouble from the start in the ninth. 6-6 game. Trent Oeltjen reaches first safely when he bunts into a force at second after a leadoff single by Rod Barajas. Oeltjen moves up on a one-out single by Jamey Carroll, who singles through short with Ian Desmond in position near second hoping for a double play grounder. Rafael Furcal doubles Oeltjen in from second and the Dodgers and Nats have a rubber match to play Sunday. 7-6 final. 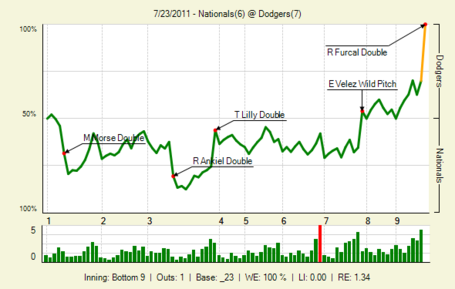