5. Off the Road: The Washington Nationals dropped two of three in Atlanta, then two of three in Houston and they've split the first two with LA, so the Nats need to win the Sunday matinee in Los Angeles or they risk dropping three games below .500 for the first time since June 16th when they swept the Padres and Cardinals in back-to-back series to climb back to 33-36. On the road this year, Washington's 21-33 on the road coming into today's game, 28-18 at home, and they have a nine-game homestand coming starting on Tuesday. But first the finale, the rubber match in LA...

4. "He's a rabbit if he can get on," - Vin Scully on the Shark: Roger "The Shark" Bernadina works a 10-pitch walk out of Los Angeles' right-hander Chad Billingsley to start the Nats' Sunday matinee in LA with the Dodgers. Bernadina doesn't get a change to steal second, however, as Danny Espinosa's plunked in the back. A single by Ryan Zimmerman loads the bases and another one by Michael Morse drives in the Nats' first run. 1-0 early. Bases still loaded, but Jayson Werth and Rick Ankiel go down swinging, leaving it up to Jesus Flores. Check-swing K, three runners stranded by three straight batters. 1-0 Nats after a half. Billingsley throws 38 pitches in the first...

3. Give It Back: Jason Marquis has two outs in the Dodgers' first before he gives up back-to-back singles by Matt Kemp and Aaron Miles. Kemp lines to right on a first-pitch fastball, and Miles singles up the middle to score Andre Ethier from second and Kemp all the way from first ahead of a throw in from Danny Espinosa that Jesus Flores mishandles anyway or it might have been close. 2-1 Dodgers. Nine Nationals in a row go down to Billingsley after they loaded the bases and scored a run in the first, and Billingsley's at 68 pitches through three after an 18-pitch third. Still 2-1 LA.

2. No DP: Jason Marquis gives up a leadoff walk to Rafael Furcal in the Dodgers' third, and after a one-out single by Matt Kemp, Marquis' second walk of the inning and third today loads the bases for James Loney. The Nats' right-hander looks like he'll be out of trouble, however, when Loney grounds to Danny Espinosa at second, Espinosa throws to second for the force, but Ian Desmond's throw to first is wide pulling Morse of the bag, and a run (the leadoff walk of course) scores on what should have been a double play, 3-1 Dodgers.

1. Billingsley pwns Nats: Chad Billingsley collects eight K's through the four scoreless frames after he gives up a run in the first and after he puts the Nats down in order in the top of the fifth he's retired 15 of 16 batters since the Nats loaded the bases in the first with Jayson Werth's walk providing the Nats' only base runner since the first inning. Zimmerman, Werth and Morse go down in order in the Nats' sixth, make that 9 K's and 18 of 19 Nats' batters retired since the first. Still 3-1 LA after five and a half. 104 pitches for Billingsley, 66 strikes, two hits, two walks and just the one earned run in the first allowed. Jason Marquis gets an inning-ending groundout from Billingsley in the bottom of the sixth, and he's sent eight-straight Dodgers back to the bench, or, uh, the mound in Billingsley's case. 3-1 Dodgers after six. 1-2-3 in the 7th too, the Nats can't get on base against Billingsley...

0. 21 of 22: Jason Marquis retires the last eight batters he faces and he's replaced by Sean Burnett in bottom of the seventh. Marquis' line: 6.0 IP, 5 H, 3 R, 3 ER, 4 BB, 2 K's, 108 pitches, 68 strikes. The Dodgers go down in order and send Billingsley back out to the mound. The Nats send Alex Cora up to hit and LA Skipper Don Mattingly doesn't like it so he pulls the pitcher for reliever Kenley Jansen. 1-2-3 frame, and Nats no.13, 14 and 15 in a row go down since Jayson Werth's fourth inning free pass. Todd Coffey throws a scoreless eighth to keep the Nats within two, still 3-1 after eight, and Dodgers' right-hander Javy Guerra retires the Nationals in order in the ninth to end it. 3-1 LA. The Nats finish their nine-game road trip 3-6 and return home where they'll play the Marlins on Tuesday night.

• Miss The Game? The DC Faithful Tried To Stick With It... 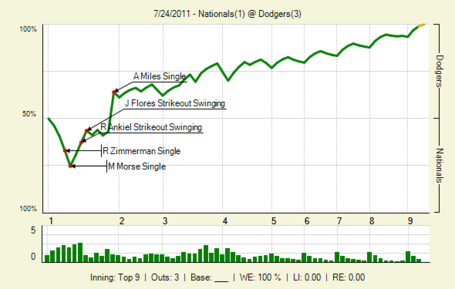