• Top Story: The Washington Nationals traded 26-year-old hard-hitting OF/1B Bill Rhinehart and 22-year-old left-handed reliever Chris Manno to Cincinatti tonight for right-handed-hitting outfielder Jonny Gomes in a trade that was announced just before the Nationals' game against the Marlins started. Nats' GM Mike Rizzo told reporters, as quoted by Washington Post writer Adam Kilgore tonight in an article entitled, "Mike Rizzo on the Nationals’ trade for Jonny Gomes", the trade provided the Nationals with some right-handed pop off the bench that the team could use, describing Gomes, a career .244 hitter over nine MLB seasons who is hitting .211 with eight doubles, 11 HR's, a .336 OBP and .399 SLG in 77 games and 265 at bats in 2011, as a, "... big presence that allows you to change the strategy of the other manager and a guy who can leave the ballpark regularly." And it doesn't hurt that the potential Type B free-agent-to-be would earn the Nats a compensation pick if he didn't end up staying in the nation's capital.

5. Control: Jordan Zimmermann struggled with his control early, and got hit hard...

...allowing a run in the first when Omar Infante scored after hitting a triple to the wall in left-center, where it bounced around and was mishandled by Laynce Nix. Zimmermann then gave up three runs in the third with Emilio Bonifacio doubling and scoring after an Omar Infante single when Greg Dobbs' double play groundout allowed him to cruise in from third. A HBP on Hanley Ramirez earned Jordan Zimmermann a cold stare from the Marlins' SS, but what really hurt was when Logan Morrison launched a two-out, two-run HR to right and over the out-of-town scoreboard for a 4-0 lead after three. No. 16 on the year for Morrison, and just the sixth HR the Nats' right-hander's surrendered in 123.0 IP.

4. 0-2 Slider: Down 4-0 through four with the Nationals hitless since the first inning of their last game in LA, Jordan Zimmermann dug a deeper hole in the top of the 5th when he threw an 0-2 slider that hung up inside for Marlins' first baseman Greg Dobbs, who was inserted into the Florida lineup late when Gaby Sanchez was pulled, and Dobbs crushes it. Solo HR to right, 5-0 Marlins. The Nats' right-hander's slider's been flat in each of his last two outings. Nationals' manager Davey Johnson spoke about one similar "cookie" he threw to Clint Barmes in Zimmermann's last start in Houston, and the pitcher himself told reporters, "I just didn't have a good feel for much of anything. My slider was pretty terrible tonight and I had a rough time locating the fastball and when you have nights like that you're going to get hit around." He'd find his slider later in tonight's game...but he was down 5-0 when he did.

3. NIX'd: Marlins' starter Ricky Nolasco had allowed just two walks through four innings pitched when he started the fifth inning in Nats Park. Nats' left fielder Laynce Nix was apparently seeing the ball well, having walked in his first at bat before stepping up to lead off the fifth. Up 2-0 quickly, Nix took a fastball for a called strike, then unloaded on the 2-1 fastball low and inside from Nolasco, launching it into the right field bullpen for the Nats' first hit of the night off the Fish starter.

Jordan Zimmermann responded to his early struggles with a 1-2-3 sixth in which he struck out the side, sending Mike Stanton, Mike Cameron and John Buck back to the dugout after only 14 pitches. Stanton gets a 94 mph 2-2 fastball upstairs. Cameron K's swinging through a 1-2 slider and Buck gets an angry 1-2 slider outside that he can't help but chase. Zimmermann's up to 84 after his sixth inning of work.

2. Morse Crush: Michael Morse reached down for a low 1-0 fastball from Nolasco and connected for his 23rd double of 2011 after a one-out Ryan Zimmerman single off Ricky Nolasco in the Nats' 6th. Morse's double bounced and shot forward toward the out-of-town scoreboard in right-center allowing Zimmerman to score from first. 5-2 Marlins as the Nats' bats finally woke up. Jayson Werth lined sharply enough to short for the second out of the frame that Fish Skipper Jack McKeon pulled his starter after 5.2 IP, 3 H, 2 R, 2 ER, 3 walks, 4 K's and 111 pitches. Marlins' lefty Mike Dunn vs Laynce Nix. Lefty vs Lefty. Nix K's looking, 5-2 Marlins after six innings in D.C.

1. Henry Gives Up A HR: Sean Burnett replaced Jordan Zimmermann with a runner on third and two down in the Marlins' seventh. Burnett vs Greg Dobbs (who wasn't even supposed to play today!). Dobbs singled to center to drive in the Marlins' sixth run of the night, and the last one charged to the Nats' starter. 6.2 IP, 8 hits, 6 ER, 5 K's for Zimmermann, who throws 90 pitches, 64 strikes. Still 6-2 Marlins. Make that 7-2 when Henry Rodriguez, who threw 35.2 innings and faced 158 batters before taking the mound in the ninth tonight, surrenders his first HR of 2011 on a real long ball by John Buck. The Fish catcher puts a 1-0 96 mph heater into the Red Porch seats in right-center. 7-2 Marlins. 33 pitches later, when Rodriguez is done, having given up five runs, it's 11-2 Marlins, and that's how it ends.

• GameThreads Everyone Seemed Lightly Attended. Here's Ours, Some Of The DC Faithful Followed... 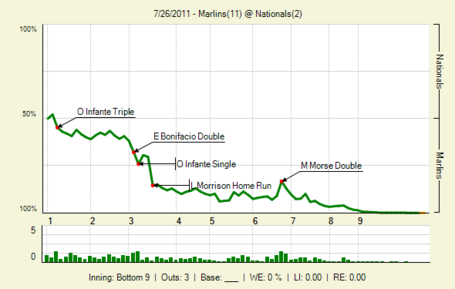