5. Mr. National: Livan Hernandez is (0-1) with the Washington Nationals 0-4 with the right-hander on the mound in July. The 36-year-old starter allows a two-out single by Greg Dobbs in the opening frame, but non-chalantly tosses to Michael Morse for the third out when Hanley Ramirez grounds back to the mound to end the Marlins' first in the second of three for the Fish in D.C. The Nats get back-to-back two-out singles from Ryan Zimmerman and Mike Morse who line and pop to right, respectively, to put runners on first and third with two down. Florida starter Javier Vazquez gets a grounder up the middle from Laynce Nix that Hanley Ramirez is waiting for and there's no score in the first when the shortstop steps on second....

4. Over The Out-of-Town Scoreboard: Mike Stanton loves Nationals Park. Really loves it. There was some discussion during last night's about how all the Marlins like to play on the road since they don't draw in Sun Life Stadiu_ and after the last few years they must love playing in the nation's capital since they've dominated the Nats in D.C. Mike Stanton, however, is on a whole other level of domination. In 11 games and 47 plate appearances after he hits a HR to right field in his first at bat tonight in the second, Stanton's 18 for 40 with 6 doubles, 7 HR's and 13 RBI's in Nationals Park. Livan baffles the 21-year-old second-year Marlin with a 1-1 curve, then throws a high two-strike "fastball" that Stanton pushes out to right-center for an opposite field HR that lands in the stands above the out-of-town scoreboard. 1-0 Fish.

3. Bad Livan: Livan Hernandez isn't getting any run support from the Nats, who strand four through three innings tonight, going 0 for 3 with runners in scoring position so far against Javier Vazquez. Marlins' first baseman Greg Dobb's starts the Marlins' fourth with a single to center and one-out later back-to-back walks to Logan Morrison and Mike Stanton load the bases for Mike Cameron. Livan Hernandez battles Cameron for seven pitches, and gets him looking for out no. 2 with a full-count backdoor breaking ball that's called strike three on the stunned Fish outfielder. John Buck, who broke up Henry Rodriguez's homer-less-innings- streak last night, comes through with a two-out, two-run single to left that makes it 3-0 Fish after three.

2. NIX vs The Second Deck: Laynce Nix almost cleared the second deck in right. That's the one above the bullpen. Dunn Country as some folks call it. Rarified air up there. Nix takes a full-count curve for a ride to right and just two or three rows from really memorable. Nix's solo shot, his second HR in two games, gets the Nats on the board, 3-1 after four. Nix's 14th of 2011.

1. Livan's 4.0 Inning Outing: Davey Johnson's got a quick hook tonight. It looks like things are getting out of hand in the fifth after Livan Hernandez gives up a leadoff walk to Emilio Bonifacio and a single by Omar Infante that puts runners on first and third with no one out. Livan's done. That's the second time in his last three starts that Livan Hernandez hasn't made it out of the 5th. Ross Detwiler replaces Hernandez and strikes Gregg Dobbs out with a 2-2 fastball inside that Dobbs fouls into Jesus Flores' mitt. One down when Hanley Ramirez doubles to right field to make it 4-1 Fish. Ramirez's 14th double of 2011. Detwiler holds it there, allowing only Livan's runner to cross, so Hernandez's final line: 4.0 IP, 5 H, 4 R, 4 ER, 3 BB, 5 K's, 87 pitches, 47 strikes.

0. Old Expo: Javier Vazquez has allowed just one run through six when he puts the first two Nats on in the 7th. Runners on first and third after Roger Bernadina takes a leadoff walk and just when it looks like the leadoff runner will be erased, Marlins' SS Hanley Ramirez gives the Nats a gift, dropping at tailor-made DP grounder off Jerry Hairston's bat. Ramirez boots it. First and second with no outs. Alex Cora battles Javier Vazquez to a full count and grounds into a rally-killing 5-4-3 DP. Bonifacio to Infante to Dobbs. Double play. Roger Bernadina's still a third, but he's stranded there when Ryan Zimmerman flies out to right. Nats 0 for 5 with RISP tonight, 8 LOB. 4-1 Fish after seven. The Marlins' center fielder Mike Cameron leads off the eight with a solo HR to right. 5-1 Marlins.

-1. Storen HR Hurts: Drew Storen gives up a two-out, two-run HR to Mike Cameron in the 9th. Cameron's second of the game makes it 7-1 Marlins, and it really hurts when the Nats rally in the botom of the frame. Ian Desmond triples in a pinch hit appearance in the bottom of the ninth. Jesus Flores grounds back to the mound. Roger Bernadina gets abused by Marlins' right-hander Steve Cisek and goes down swinging, but Jerry Hairston, Jr. keeps hope alive and gets a RISP in for the Nats with a two-out RBI single that finally scores Desmond. 7-2. Alex Cora walks to give Ryan Zimmerman a shot, and his ground-rule double to right brings Hairston home. 7-3. Michael Morse faces a new pitcher, Leo Nunez, but the rally continues with a two-run single to right. 7-5 Fish. [Coffey attacks water cooler]. Laynce Nix rips into a first-pitch change from Nunez and sends it ou---t to the track where Stanton catches it. Ballgame. Nats drop fourth straight, 7-5 final. 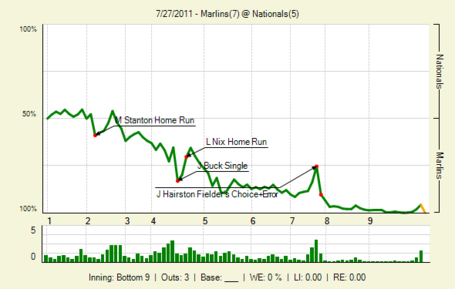 (Tip of the Nats cap to cat daddy3000 in the game thread for the title).