5. Cool Hand vs Brad Hand: Nats' lefty John Lannan throws a quick 1-2-3 11-pitch first against Florida to start the series finale between the Nationals and Marlins. Two outs into the Nats' first, Ryan Zimmerman drives an 0-1 slider from Fish lefty Brad Hand to left for the Washington Nationals' first hit of the afternoon. The Nats' first RISP opportunity ends with Michael Morse striking out swinging at a 2-2 two-seam fastball outside, and it's 0-0 after one. Lannan struggles a little more in the second, letting the first two runners on. Hanley Ramirez hits a ground-rule double out to left-center. Mike Stanton takes a 2-2 fastball in the shoulder/neck. Two on, no outs, but after a fly to left, fly to right, two-out walk and a bases loaded swinging K by the opposing pitcher, John Lannan has his second scoreless innings in Nats Park. This one took 29 pitches...

4. The Leadoff Walks Start: John Lannan walks Emilio Bonifacio to start the third, and the Marlins' third baseman steals his 24th base in 28 attempts. Bonifacio slides in safely ahead of a strong throw by Wilson Ramos. Bonifacio steals second with Omar Infante up and takes third on Infante's single. Logan Morrison's grounder to second scores Bonifacio to make it one nothing, and an error on Danny Espinosa puts two on with no one out. Hanley Ramirez grounds into a double play and Mike Stanton just grounds out. Lannan limits the damage.

A two-out walk to Danny Espinosa in the Nats' third is followed by a slow-rolling single through second by Ryan Zimmerman that allows the Nats' second baseman to go first-to-third. Brad Hand starts Michael Morse 2-0, misses outside and then walks him to loaded the bases. Jayson Werth is up 2-0 too, and 3-0 and he swings and pops it up. Two dow---but Mike Stanton gets a late start and the first and second baseman can't get there. RBI pop fly single on a 3-0 pitch. Should've been an out. 1-1 game. Jonny Gomes rolls a first-pitch fastball back up the middle, tailor-made DP to end the rally. 1-1 game after three.

3. Another Leadoff Walk: Another leadoff walk by Lannan, to Mike Cameron this time, another runner on and after a swinging K by Fish first baseman Wes Helms, another hit, a one-out single by Brett Hayes, and there are runners on first and third with one down. Lannan's gets two strikes on the Marlins' starter, Brad Hand, who gets a bunt down on the 0-2 pitch, but Lannan fails to look Cameron back third and tosses casually to first, allowing the runner to trot on home. 2-1 Marlins on the mental error by the Nats' pitcher who crouches down the first base line after the play, realizing his mistake...Ian Desmond takes a patient approach to his at bat and takes the fifth walk of the day to start the Nats' fourth. Walk no. 6 comes two outs later with Desmond at second when Jerry Hairston walks to put two on for Espinosa. Brad Hand's lifted when he starts Espinosa 1-0, and Brian Sanches gets off easy when Desmond's thrown out trying to steal third on a double steal on a 3-1 pitch. 2-1 Marlins after four.

2. Moar Leadoff Walks: Lannan walks Omar Infante, that's three-straight leadoff walks and four-straight leadoff runners on going back to the Hanley Ramirez leadoff double in the second. Lannan's let the leadoff runner on in four of the five innings. This time he gets a double play grounder off Logan Morrison's bat, 4-6-3 DP, and shatters Hanley Ramirez's lumber to get a groundout for out no.3, but he's up to 95 pitches after five innings pitched and the Nats' still trail 2-1. Danny Espinosa starts the fifth with a fresh count after Desmond was caught tealing with him up in the fourth. Espinosa lines to right for a single, but two pitches and two outs later he's still at first after Zimmerman and Morse both fly out. Jayson Werth flies out too, not on the first pitch at least. 2-1 Fish after five.

0. Zim's Back: Ryan Zimmerman's 3 for 4 today and 12 for 26 over a six-game hit-streak that stretches back to the first of three vs the Dodgers in LA after he singles with two down in the Nats' seventh. Michael Morse gets "pitched around"/walked with two down and it's up to Jayson Werth to get the Nats back in the game. Werth battles Marlins' right-hander Edward Mujica in an eleven-pitch at bat and finally singles to center to score the Nats' second run. 4-2 game. Jonny Gomes K's swinging to end the inning. Henry Rodriguez gives up a leadoff walk to Mike Cameron in the Marlins' eighth. Cameron steals second, takes third on a wild pitch and scores on a groundout. 5-2 Marlins after seven and a half.

-1. Swept By Fish: The Nats go down in order in the eighth. Ryan Zimmerman collects his fourth hit in five at bats with two down in the ninth when he lines a single over second into right, but Michael Morse can't keep it going. Morse K's swinging through a 97 mph fastball from Marlins' closer Leo Nunez and the Nats' drop their fifth straight. The Fish sweep three-straight in D.C. and the Nats are now 9-17 under Davey Johnson.

• Doghouse's Post Game WPA Graph: "Game 104: Not even free beer could save this game": 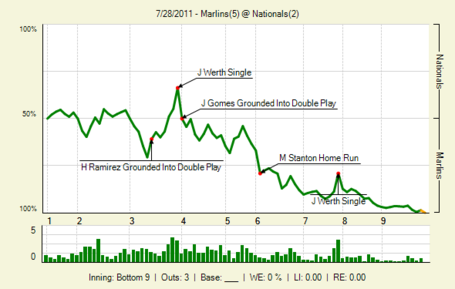