5. Chien-Ming Wang's Triumphant Return: Asked before today's game what he expected from tonight's starter Chien-Ming Wang, who hasn't pitched a major league since July of 2009, Nats' Skipper Davey Johnson joked that he expected to see, "Seven innings of one-hit, shutout ball, but whatever he's able to give me is going to be fine."

In the first at bat of his first start in over two years following a long rehab from surgery to repair the capsule in his right shoulder, the 31-year-old Taiwanese right-hander issues a four-pitch leadoff walk to the Mets' speedy leadoff man Jose Reyes, who takes second when Wang throws a wild pitch to Justin Turner. Turner singles back up the middle to move Reyes to third, and the Mets go up 1-0 when Danny Murphy slices a liner to left field to bring Reyes home. David Wright bounces one off the out-of-town scoreboard in right to load the bases. Still no outs. Angel Pagan sends another RBI single to left to bring Turner in and make it 2-0, a groundout by Jason Bay brings one in and makes it 3-0, and a sac fly by Lucas Duda makes it 4-0 before a double play courtesy of some bad baserunning by Angel Pagan gets Wang through a 24-pitch first...

Asked through an interpreter if he was nervous in the first, Wang, after the game, said, "I was kind of excited and a little bit too happy to be back on the mound, so a little bit out of control."

4. 牺牲触击: Wang's much better in the second, retiring the side in order on just 13 pitches. Mets' right-hander Dillon Gee retires the first six batters he faces and does it on 22 pitches. Wang gives up a bloop by David Wright that falls in for a two-out single in the third, but is otherwise unharmed in his second-straight scoreless frame. Dillon Gee gives up a one-out walk to Wilson Ramos in the third, but Chien-Ming Wang pops up a bunt attempt and Rick Ankiel goes down swinging. 3.0 hitless for Gee.

3. The Arm: Chien-Ming Wang gives up two runs in the fourth, but they're both unearned. Jayson Bay starts the frame with a hard-hit liner to center. Danny Espinosa's thinking double play when Lucas Duda sends a weak roller toward second, but Bay was running on contact and Espinosa bobbles the grounder and drops it, no throw. Both runners are safe. Ronny Paulino lines to right in the next at bat, but Jayson Werth misplays it and Bay tries to score. Rick Ankiel picks up after Werth and throws home, "You're OUT!" Ankiel nails Bay. Not even close. Dillon Gee? Single to center and an RBI, of course, 5-0 NY. Jose Reyes sends a sac fly to left, 6-0 Mets. Those two are unearned.

Ryan Zimmerman collects the Nats' first hit off Dillon Gee when he singles with one out in the bottom of the fourth, and the Nationals get their third baserunner of the night when Gee hits Michael Morse in the left arm in the next at bat. Jayson Werth shoots a single through second and the bases are loaded for Laynce Nix, whose groundout to second should end the inning, but after the force at second, Reyes sails the throw to first allowing two runs to score. 6-2 Nats after four.

2. Chien-Ming Wang Is Done: Wang's first start since 2009 ends after 4.0 IP, 8 H, 6 R, 4 ER, 1 BB, 2 K, 60 P (39 strikes), 1 WP. Tom Gorzelanny throws a scoreless top of the fifth and the Nats pick up a run in the bottom of the inning when Wilson Ramos doubles to start the frame, takes third on a groundout by Alex Cora and scores on a sac fly by Rick Ankiel. 6-3 Mets after five...Jason Bay doubles to start the Mets' 6th, Paulino doubles too to drive Bay in and Reyes hits the third double off the inning off Gorzelanny to score Paulino. 8-3 Mets lead over the #Nats.

1. RISP FAIL Must End: A two-out walk by Werth, two-out single by Laynce Nix and another walk by Jonny Gomes in the sixth and the bases are loaded for Wilson Ramos, who lines out (sharply at least) to center for out no.3. Alex Cora's hit by a pitch to start the seventh and two outs later he's on third when Ryan Zimmerman walks to put two on for Michael Morse, who flies out to center. Nats are 1 for 6 with RISP. 7 LOB tonight. Still 8-3 NY in the 8th.

0. Rally?: Laynce Nix, Jerry Hairston and Wilson Ramos hit three consecutive singles off Mets' right-hander Bobby Parnell to start the bottom of the eighth. Ramos' single drives the Nats' fourth run across. 8-4 Mets. Tim Byrdak replaces Parnell and gives up the fourth straight single by Jesus Flores. Bases loaded for Rick Ankiel, who hits the fifth single of the inning, 8-5. D.J. Carrasco replaces Byrdak and strikes out Danny Espinosa and Ryan Zimmerman to end the frame. Jason Isringhausen's on in the 9th and he throws a 1-2-3 frame to end the Mets' 8-5 win. The Washington Nationals drop their sixth-straight game... 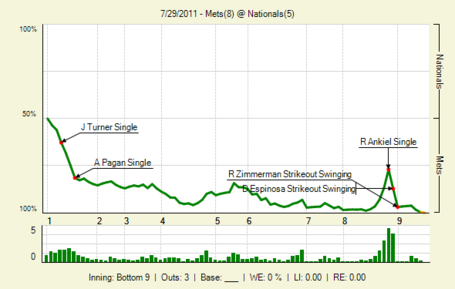 (Tip of the Nats cap to FP on the MASN broadcast for the title.)