Washington Nationals Don't Make Any Late Deadline Deals, But They Do Beat The New York Mets, 3-2 In The 9th.

Share All sharing options for: Washington Nationals Don't Make Any Late Deadline Deals, But They Do Beat The New York Mets, 3-2 In The 9th.

5. Zim and Zim(n): Ryan Zimmerman came up empty on a barehand attempt at fielding what ends up a one-out bunt single by former Nats' outfielder Willie Harris, but Nats' backstop Jesus Flores picks the third baseman up when he guns Harris down trying to steal second. The Nats' FOF makes a backhand stab on a sharp grounder from Danny Murphy, but throws high to first, E5. Jordan Zimmermann's not bothered, however, as he retires David Wright on a fly ball to center, and gets through one scoreless on 16 pitches, 8 of them strikes. After the first inning today, Zimmermann's at 127.2 IP of the 160.0 he's going to throw this year on an innings-limit. After he pitches around a one-out single by Jason Bay in the second, the 25-year-old right-hander's through two scoreless on 30 pitches, but one inning closer to the end of his 2011 campaign...

4. Oh, Murph! 9-4-3: Jordan Zimmermann hasn't walked a batter since he his July 4th start against the Chicago Cubs. A leadoff walk to the opposing starts the third, however, and it looks even worse after the Nats' starter surrenders a single to Jose Reyes in the next at bat and a one-out base-loading single to Danny Murphy after a failed bunt attempt by Willie Harris. Bases loaded, one down for David Wright. Wright flies to right on a 2-1 bender and Jayson Werth makes the catch and hits the cutoff man on the throw in, Niese on third isn't going anywhere, but Murphy inexplicably runs a few steps off first and gets doubled up by the cutoff man to end the threat. Well played, Murph. 9-4-3 DP, 0-0 score after three in D.C.

3. Morse Crush: Michael Morse's one-out double (no. 25) on the year is the Nats' third hit through four innings. Jayson Werth K's swinging on three pitches from Jon Niese. That's two K's on six pitches so far for Werth. Right Side Danny Espinosa goes down swinging too. K no. 105 on the year for the Nats' second baseman, who's now got just three hits in his last 42 appearances (thanks for counting, Dave from NNN). Jordan Zimmermann's back on the mound in the fifth. Still no score. Zimmermann gives up a two-out single to Jose Reyes, but the speedy Mets' shortstop's caught stealing for just the seventh time in 39 attempts this season. 0-0 after four and half in Nats Park. 85 pitches, 50 strikes for the Nats' starter.

2. Zimmermann's Done: Jayson Werth makes a sliding attempt on a one-out, one-on liner to right by David Wright, but can't come up with it, and the Nats' right fielder bobbles it so he has to rush a throw to second and it sails on him. Danny Murphy's safe at first after singling in front of Wright and Wright's at first, two on, one out. Zimmermann's called for a balk with Angel Pagan at the plate, so it's second and third with one down. Zimmermann gets Angel Pagan looking with a 2-2 slider outside and throws a 95 mph 4-seamer upstairs to get Jason Bay swinging! K's no. 5 and 6 on the day for Zimmermann, who's at 107 pitches after he's done with sixth.

1. Back-To-Back-To-Back: Ian Desmond bounces a double off the ExxonMobil sign on the left field wall. Ryan Zimmerman bounces double no. 10 off the out-of-town scoreboard in right. Desmond scores from second. 1-0. Michael Morse collects his second double of the game and no. 26 of the season, ripping a sharp grounder by first and into right. Zimmerman scores from second, 2-0 Nats. Back-to-back-to-back two-baggers and it's 2-0 Nats with Zimmermann in line for the curly-W. Ryota Igarashi replaces Jon Niese and holds the Nats there after a long two outs filled with third-to-first fakes. Still 2-0 Nats.

0. Make That 2-1: Sean Burnett replaces Jordan Zimmermann in the top of the seventh, and promptly surrenders one bomb of a HR to Scott Hairston, who jacks a 2-2 sinker sending it sailing over the visitor's bullpen and into the first row of seats in left. 377 at the wall +20ft or so more. Hairston crushed it. 2-1 Nats after six and a half. Tyler Clippard takes the mound in the 8th with just minutes to go before the 4:00 pm EDT Trade Deadline passes. Clippard puts the Mets down in order. Drew Storen's warming in the pen and the Deadline has passed. No deals announced. Jayson Werth doubles off the out-of-town scoreboard in right with one down in the eighth, but the Nats fail to add to the lead.

-1. STOREN WARNING!!: Drew Storen's still a Washington National and he's out on the mound looking for save no. 27 of 2011. Angel Pagan grounds to second, one down. ONE!! Jason Bay grounds out to Ryan Zimmerman at third, TWO!! Storen falls behind Scott Hairston, 1-0 and throws a 95 mph sinker that's launched to left and GONE! NO! Blown save no. 4 of the year for Storen. 2-2 game in Nats Park. Jesus Flores starts the Nats' ninth with a single through second off Mets' right-hander Bobby Parnell and Rick Ankiel's sort of hit by a pitch so there are two on with no one out. Brian Bixler tries to bunt both runners over but ends up getting the lead runner cut down at third when he hits it too hard and Danny Murphy charges and throws to third. Ian Desmond's up, and Parnell throws a wild pitch that lets both runners advance. Second and third. Desmond grounds back to and over the mound, Ankiel slides in safely! Ballgame. 3-2 Nats win on a walk-off infield single. Storen blows the save, earns the win. 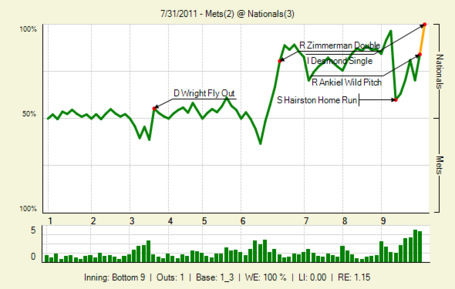