5. Werth's Bat Explodes: Jordan Zimmermann's coming off what was arguably the best start of his career thus far last time out against the Angels, and he's got a string of 11-straight "quality starts" going heading into today's game against Chicago. The Washington Nationals have faced Cubs' starter Casey Coleman once before. The 24-year-old right-hander, a 15th Round pick in the '08 Draft, (and the son of a Senators' 1st Round pick) made his sixth major league start here in Nationals Park last year, holding the Nats to one run on nine hits in a 9-1 Cubs' win. Zimmermann needs just 14 pitches, eight strikes, to retire the first three batters he faces today. Coleman gets a grounder to first from Roger Bernadina, but a fielding error by Carlos Pena puts the Nationals' first runner on, and one out later Coleman grooves an 0-2 fastball to Danny Espinosa that ends up in the left-center gap for a double. Bernadina goes first-to-third™ on Espinosa's double, and scores on a Laynce Nix laser through second, 1-0 Nats early. Jayson Werth, injured wrist and all, shatters his bat, but singles on an RBI line drive to right that makes it 2-0 Nationals before Coleman strikes out Matt Stairs and Pudge Rodriguez to end the first...

4. Apparently The Shark...: Roger Bernadina tracks an Aramis Ramirez fly all the way to the wall in center and make an awkward leaping attempt at the cut-out, but comes up empty this time, allowing the Cubs' third baseman to cruise into third with a one-out triple. Marlon Byrd gets a sharp grounder by Zimmermann on the mound and through the infield for an RBI single to center that cuts the Nats' lead in half. 2-1 D.C. Zimmermann buckles down and strikes out the side getting Alfonso Soriano and Geovany Soto swinging to preserve the lead. The Cubs' starter recovers from the error-stained first to retire the Nationals' hitters in order in the second on seven pitches.

3. ...Can't See A Thing: After recording K's for 5 of the first six outs this afternoon, Jordan Zimmermann retires the Cubs in order on a fly to center and two groundouts in the third. Three weak grounders from the Nats later, Zimmermann's back on the mound in the fourth, and in spite of the back-to-back one-out singles he surrenders, he should be out of the frame with the Nats' 2-1 lead in tact when he pops Alfonso Soriano up to short center. Danny Espinosa's drifting back, Werth's drifiting over from right and Roger Bernadina's charging in, but no one calls it and the Shark doesn't see the ball, so it drops in for a two-run single. 3-2 Cubs on what's ruled a hit because no one touches it.

2. DIY: Jordan Zimmermann's one-out single in the fifth is the Nationals' first hit since the bottom of the opening frame, but he's stranded at first, or more accurately forced out at second two batters later on an inning-ending groundout by Alex Cora. The Nats' starter starts the bottom of the fifth at 71 pitches, and one-out into the sixth he gets into trouble. The Cubs get a one-out double from Aramis Ramirez, who reaches down for a low 2-2 curve and pulls it into left field. Carlos Pena singles to right on a first-pitch slider and Zimmermann issues his first walk of the day to load the bases for Alfonso Soriano. Soriano pops to center, Bernadina has this one, but a two-out single to right field by Geovany Soto makes it 4-2 Cubs, and it would be 5-2 if Jayson Werth doesn't nail Carlos Pena at home on a strong throw in from right. Pudge makes the tag, 4-2 Cubs in the sixth. Jayson Werth? Coming off the strong defensive play? K's. 4-4 after seven.

1. 3-Base ANGST!!: Laynce Nix hits his first triple of the year off the out-of-town scoreboard in right-center just out of a leaping Marlon Byrd's reach, and Jayson Werth hits a dribbler toward first in the next AB that allows Nix to score. 4-3 Cubs. Ian Desmond reaches on a sharp grounder to short off Cubs' lefty Sean Marshall to start the seventh. Starlin Castro fields it deep in the hole but bounces a throw Carlos Pena can't pick. Ruled a single, and that's just the Nats' third hit since the Nats' first. A sac bunt by Rick Ankiel moves Desmond into scoring position, but a backwards K by Roger Bernadina leaves the Nats one out away from wasting the runner. Ryan Zimmerman hits for Alex Cora, or more accurately walks, as Kerry Wood comes on for Chicago. Desmond takes third on a wild pitch during the AB. Danny Espinosa is down 0-2, but he gets hit and the bases are loaded. Laynce Nix vs Wood: Walk. 4-4 game.

0. Clipp's Changed: All-Star Nats' set-up man Tyler Clippard throws a quick scoreless eighth, retiring the Cubs' batters in order. The Nationals waste a one-out walk and a two-out single in the home half of the frame, with Roger Bernadina grounding out to end the eighth and strand Pudge Rodriguez in scoring position at second. Nats' closer Drew Storen takes over in the ninth, surrendering a leadoff single to Marlon Byrd, but the former Nationals' outfielder's erased by a slick 4-6-3 DP on a sharp grounder to Danny Espinosa off Tony Campana's bat. Storen pitches around a two-out bloop single to center, and retires Reed Johnson for a scoreless inning of work. Still 4-4 after eight and a half. Cubs' lefty James Russell throws a scoreless ninth and it's free baseball on the 4th of July.

-1. WOWP: Henry "Lightning" Rodriguez throws a scoreless top of the tenth. Jayson Werth lets Cubs' right-hander Marcos Mateo walk him in the first at bat of the Nats' 10th. The second pinch-hitting pitcher of the game, Livan Hernandez, gets down a sac bunt to move Werth to second. Mateo's apparently injured, so Chicago brings on Carlos Marmol, who apparently forgets about Werth, allowing the Nationals' outfielder to steal third without a throw, and a wild pitch with Pudge Rodriguez at bat brings Werth home!! WALK-OFF WILD PITCH!! The Nationals win! 5-4 final in 10 innings. 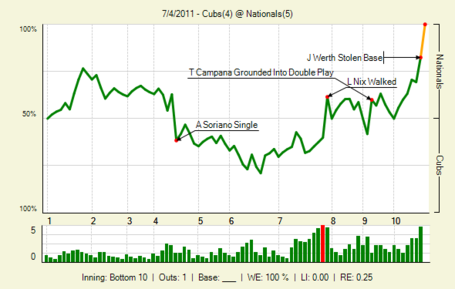 (Tip of the Nats cap to Mrs. Doghouse for the title.)