Share All sharing options for: Score Early. Hold On. Repeat. Washington Nationals 3-2 Over The Chicago Cubs.

5. Davey Johnson Will Wrestle For Lefty: Will the vote of confidence that '07 1st Round pick Ross Detwiler got from Nats' Skipper Davey Johnson this afternoon inspire him in his latest major league stint. Johnson, who made his desire to add a left-hander to the pen known as soon as he took over on the bench two weeks back now, joked with reporters this afternoon that someone might have to wrestle him before Detwiler will be sent back down. The Nats' starter's still stepping toward first instead of directly home, still throwing across his body though not as dramatically, but he's not shook by a one-out Jeff Baker single. Detwiler gets an inning-ending 6-4-3 DP on a grounder to short by Aramis Ramirez and he's through his first scoreless inning of the year in D.C. on ten pitches, eight strikes...

4. Take It Personal, Ramos: In spite of the fact that he'd surrendered three-straight singles to Roger Bernadina, Danny Espinosa and Ryan Zimmerman, Cubs' starter Ramon Ortiz was in the process of limiting the damage when Laynce Ortiz grounded into what should have been a routine double play. Chicago second baseman Jeff Baker stumbles, however, or somehow makes one awkward throw that sails right over shortstop Darwin Barney and into left-center while two runs score. 2-0 Nats. After Jayson Werth K's swinging way out in front of a full-count slider, the Cubs walk Rick Ankiel to get to Wilson Ramos. (ed. note -  "I know, I asked myself too.") The Nats' backstop rips into a grounder that Aramis Ramirez dives on, but only to stop it, no play, another run scores, and the Nats are up 3-0 after one.

3. RISP FAIL: The Nationals fail to turn leadoffs walk by Ramon Ortiz in the second and fourth into any more runs off the one-time National-now-Cub's right-hander. Ross Detwiler's given up just two hits and he's induced seven grounders from the 15 batters he's faced through four scoreless. Detwiler's at 58 pitches when he starts the fifth. 12 pitches later, the 25-year-old lefty has 5.0 scoreless frames on the board. The Nationals get back-to-back one-out singles from Danny Espinosa and Ryan Zimmerman in the bottom of the frame, but Laynce Nix K's swinging through an offspeed pitch and Jayson Werth kills the rally with a 6-4-3 inning-ending DP. Still 3-0 Nats after five.

2. 3rd Time 'Round: Reed Johnson takes a change for a called strike one, but crushes the second one when Detwiler tries back-to-back offspeed pitches. The Cubs' right fielder drives a double into the left-center gap and gets pitchers up and moving in the Nationals' bullpen. After a fly ball from Blake DeWitt for the first out of the frame, the Nats' lefty misses with a first-pitch fastball to Aramis Ramirez, and he fools the Cubs' slugger with a 1-0 change knee high and outside, but Ramirez waits for it, reacts and reaches down, powering it out to left-center. Gone! Two-run HR, 3-2 Nats. Detwiler's done after 5.1 IP, 4 H, 2 R, 2 ER, 1 K, 78 pitches, 49 strikes. Todd Coffey gives up a one-out double to Geovany Soto, but pops Alfonso Soriano up before striking out Marlon Byrd to preserve Detwiler's 3-2 lead through six.

1. Who Needs Runs?: Danny Espinosa takes a four-pitch one-out walk from Cubs' lefty John Grabow and Ryan Zimmerman will have to face a right-hander, Jeff Samardzija. The Chicago reliever pops Zimmerman up, but surrenders a two-out single to Laynce Nix to give Jayson Werth another attempt to drive some runners in and give the Nats a bigger lead, but the Nats' right fielder grounds weakly to short, and he's 0 for 4 with 2 K's and 6 LOB so far tonight. The Nats are 2 for 9 with runners in scoring position on the night. Tyler Clippard's back out on the mound, and he retires the Cubs in order on 13 pitches to keep it at 3-2 Nats after seven and a half.

0. STOREN WARNING!!: The Nationals get their leadoff man in the bottom of the eighth. Rick Ankiel lines a first-pitch fastball from Samardzija back up the middle to put a runner on to start the frame for the sixth time in eight innings in Nats Park tonight, but they once again come up empty with Matt Stairs striking out and Roger Bernadina grounding out after Ian Desmond bunted both runners into scoring position. 2 for 11 w/ RISP. Still 3-2 Nats.

It'll be up to Storen. Alex Cora takes over at first for Laynce Nix. The Nats' flat-brimmed closer starts Alfonso Soriano with a first-pitch slider for a strike and gets up 0-2 before missing high and outside. 1-2 count. Soriano fouls off two and eventually pops out to Cora at first, of course. ONE!! Marlon Byrd takes three balls, 3-0, then two strikes, 3-2, and singles to left with one down. Runner on for Carlos Pena. The Cubs' left-handed hitting first baseman grounds to Espinosa, to Desmond to Nix...No Cora, and he drops it. Two down, Pena's safe at first, and Darwin Barney gets a shot with two down, but he grounds out to second and a slick barehand play by Espinosa ends the game. 3-2 Nats, and they climb back up above .500, holding on to Ross Detwiler's W, the Nats' '07 1st Round pick's 3rd MLB W. 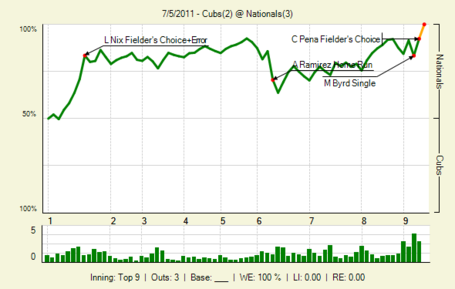