Washington Nationals Win Again, 5-4 Over The Chicago Cubs On Squeeze.

Share All sharing options for: Washington Nationals Win Again, 5-4 Over The Chicago Cubs On Squeeze.

5. This Is Your Life, Tom Gorzelanny: Last Friday in a 2-1 Nats' win, 28-year-old Tom Gorzelanny gave up six hits, a walk and one unearned run in 7.0 IP in which he struck out eight Pittsburgh Pirates' batters. The Pirates drafted the then 20-year-old left-hander out of the University of Kansas with the 45th pick in the 2nd Round of the 2003 First-Year Player Draft. Tonight the Nats' lefty takes on the Chicago Cubs who acquired Gorzelanny in a July '09 deal with the Pirates that brought the Evergreen Park-born starter back to the North Side of the Windy City in his home state of Illinois. Gorzelanny was traded by the Chicago Cubs to the Washington Nationals for pitchers A.J. Morris and Graham Hicks and outfielder Michael Burgess this past winter, and he starts his first outing against Chicago since he was dealt with a 1-2-3 10-pitch first...

4. ROY: Roger "The Shark" Bernadina beats a throw from short by Starlin Castro to first and the Nats' outfielder's on with an infield single in the bottom of the Nationals' first. Cubs' right-hander Randy Wells makes the mistake of trying to throw a changeup inside to the next Nat, Danny Espinosa, and it's a 2-0 game in the nation's capital a few seconds later when Espinosa's 16th HR soars over the high wall in right field where the Nationals' bullpen ends and the out-of-town scoreboard begins. Gorzelanny retakes the mound and gives up a leadoff single to Geovany Soto and a two-run HR to Carlos Pena, who takes an 0-1 fastball over the American League section of the out-of-town scoreboard for a game-tying two-run HR of his own. No. 18 for the first baseman who was reportedly on the top of D.C. GM Mike Rizzo's wish list before Adam LaRoche signed this winter. 2-2 after two.

3. Step it up, Lannan!: Still tied at 2-2 after Gorzelanny retires the Cubs in a scoreless fourth. The Nats' lefty strikes Carlos Pena out this time, gets a groundball out from Marlon Byrd, Gorzelanny's first groundout of the game in a fly-filled affair, and picks Alfonso Soriano off first after a two-out single by the former Nationals' outfielder. Gorzelanny then collects his first hit of the season with a two-out line drive to right that leaves John Lannan alone on the list of hitless Nats' pitchers. Gorzelanny and Wilson Ramos, who singled with one down, are both stranded, however, when Roger Bernadina K's looking at a full-count fastball from Randy Wells. Second time tonight the Shark's K'd with two down and a runner in scoring position. 2-2 after four.

2. THE KIDS CALL HIM ZIM!!: Danny Espinosa starts the Nats' 5th, (after a 10-pitch 1-2-3 top of the frame by Gorzelanny), with a leadoff walk off Randy Wells in front of the Nats' FOF©, Ryan Zimmerma--THE KIDS CALL HIM ZIM!! THE KIDS CALL HIM ZIM!! (Word.) Ryan Zimmerman reaches down for a sinking 1-0 fastball and lifts it to left field and GONE! Two-run HR for the Nats' first 1st Round pick. Zimmerman's 4th makes it 4-2 Nats, and after back-to-back singles by Laynce Nix and Michael Morse, Wells is done. Cubs' rookie right-hander Chris Carpenter (an '08 3rd Round pick) throws a wild pitch that allows both runners to advance on his first pitch of the night, then retires the next three Nats, Jayson Werth (pop-up, boos), Wilson Ramos (backwards K) and after an intentional walk, Gorzelanny, who goes down swinging after fouling off four-straight 1-2 pitches. Still 4-2 Nats.

1. Moar Booze: Jayson Werth pops up unproductively to short center with runners on 2nd and 3rd and no one out in the 5th, then takes a bad first step and can't catch up to the Starlin Castro fly to right that starts the Cubs' sixth. Leadoff double for the Cubs' shortstop and the next pitch from Gorzelanny is launched by Chicago third baseman Aramis Ramirez, the reigning NL Player of the Week, who puts a fastball on the batter's eye green in straight-center for a two-run HR that ties the game at 4-4. Gorzelanny pitches his way out of the top of the sixth, but he's likely done after 6.0 IP, 7 H, 4 R, 4 ER, 0 BB, 6 K's, 2 HR's allowed, 82 pitches thrown, 58 for strikes.

0. Davey = Geenyus: Michael Morse crushes a 1-2 curve from Kerry Wood that soars over Alfonso Soriano and gets to the wall for a leadoff double to start the Nats' seventh. Jayson Werth takes a 1-0 slider to deep right where Reed Johnson makes the grab. Morse tags and takes third, and on the first pitch from Wood to Wilson Ramos, Morse is charging! Suicide squee--Ramos swings! Foul. That could have been ugly. Ramos takes a slider for a ball from Wood, 1-1, and then he does bunt on the next pitch! Morse is charging and the bunt's perfect! Suicide squeeze the Cubs never expected even after the first failed attempt. 5-4 Nationals. And that's Davey Johnson's run.

(ed. note - "NatsInsider.com's Mark Zuckerman on Twitter (@MarkZuckerman): "Davey claims that was 1st time he's ever called for a squeeze.")

-1. Lightning Storen: Henry Rodriguez gives up a leadoff single to Reed Johnson in the eighth before striking out the side. Starlin Castro gets an 85 mph 2-2 slider. Aramis Ramirez gets a 99 mph full-count fastball, they both go down swinging and Geovany Soto's frozen by an over-the-top 2-2 slider that drops in for a called strike three. Still 5-4 Nats after seven and a half. The Nats' waste a bunt single by Roger Bernadina and a balk by John Grabow, stranding the Shark. Drew Storen's on to end it. Danny Espinosa's on the right field grass waiting for a Carlos Pena groundout. Shift works. Marlon Byrd gets a 0-2 slider, called strike three! Alfonso Soriano flies to left on a two-strike slider and the Nationals win their third straight over Chicago, moving two games over .500 with the curly-W. 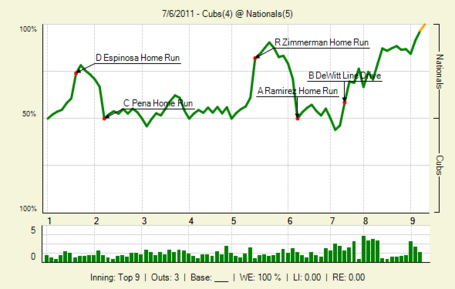