5. ROY ASG?: Danny Espinosa got endorsements from Ryan Zimmerman, Jerry Hairston and FP Santangelo today as a potential All-Star replacement should a spot become available on the NL roster. Zimmerman was on the MLB Network's Inside Pitch with JIm Bowden and Casey Stern this afternoon when he told the hosts Espinosa should get consideration. "[Espinosa's] on pace to hit 30 homers," Zimmerman said, "he's got, it's either 14 or 15 right now, with 50 RBI's, and if you ask me, I think he should be in the All-Star game. I think if you look at the position of second base and you have a guy that's on pace to hit 30 and drive in a hundred, any time you talk about 30 and 100 anywhere in the big leagues, especially second base, it's something special." Jerry Hairston, according to the beat writers present in the clubhouse before tonight's game including Washington Times' Amanda Comak (@acomak), "...walked through the #Nats clubhouse promoting Espinosa for [Jose] Reyes' All-Star spot. '16 and 50. That's an All-Star.'" During tonight's MASN broadcast, FP Santangelo, who worked in San Francisco before this season, said he'd sent texts to coaches he knew with the Giants promoting the Nats' infielder. Espinosa started tonight's game with a one-out line drive single to right in the first, then he stole his eleventh base of the year before he was stranded at second when the first inning ended...

4. THE BIG INNING YOU'VE BEEN WAITING FOR...

After he finishes the Cubs off in order in the top of the third, Livan Hernandez starts the bottom of the frame with a leadoff single to center off Chicago right-hander Matt Garza. The floodgates open. Hernandez goes first-to-third™ on a broken-bat line drive double over first by Roger Bernadina. Danny Espinosa drives both runners in with a single, 2-0, and Espinosa goes first-to-third on a swinging bunt by Ryan Zimmerman that Matt Garza throws by first. Michael Morse drives Espinosa and Zim in with another two-run single, 4-0 Nats. Jayson Werth goes the other way with a 1-2 fastball inside fighting it off for an RBI single to right, 5-0 Nats. Rick Ankiel reaches first safely on a grounder that eats up Carlos Pena, and Wilson Ramos drives two more in with a long fly to right that makes it 7-0 Nationals. Eight hits, seven runs before it ends.

3. Don't Run on Rick Ankiel's Arm: Ryan Zimmerman reached first on a throwing error by Matt Garza in the third, and he's on again in the fourth after the Cubs' right fielder Kosuke Fukudome and second baseman Darwin Barney fail to communicate and let a pop to right drop in for a hit. Zimmerman takes second running out of the box, and scores on a Rick Ankiel RBI double to right. Fukudome chases it down as the Nats go up 8-0. Ankiel's back out in center in the top of the fifth when Cubs' pinch hitter Jeff Baker tries to stretch a single into a double, and it's a bad idea. Ankiel's throw beats him to bag and Danny Espinosa just waits to apply the tag. "You're out." 8-0 Nationals after five innings in Nats Park.

2. Livan's Done: A one-out single by Aramis Ramirez and back-to-back two-out hits to center by Geovany Soto and Marlon Byrd off Livan Hernandez in the sixth and the bases are loaded with Alfonso Soriano at the plate. Soriano singles to left to drive Ramirez in and keep the bases loaded so a Darwin Barney double drives two in to make it 8-3 Nats. Pinch hitter Blake DeWitt comes up and makes it 8-6 with one swing, launching a 1-2 sinker to right where it bounces off the foul pole and falls back onto the field. 3-run HR, Livan's done. 5.2 IP, 10 H, 6 R, 6 ER, 0 BB, 3 K's, 1 HR, 92 pitches, 65 strikes. Six of the ten hits Livan allows come in the sixth as the Cubs bat around, but Todd Coffey gets the third out and it's still 8-6 Nats.

1. 8-8? Really?: Todd Coffey issues a one-out walk to Aramis Ramirez in the seventh and Davey Johnson turns to left-hander Sean Burnett for a Lefty vs Lefty battle with Cubs' first baseman Carlos Pena. Pena's 19th HR of the year sails out to right as he crushes a first-pitch slider from Burnett. Jayson Werth turns back and dejectedly sighs with his hands on his knees as it clears the high wall in right. Two-run HR, Pena's second in two games and it's a an 8-8 tie after seven innings in Nats Park. Henry Rodriguez is on to work the eighth after the Nats go down in order in the bottom of the seventh, and Rodriguez has two quick outs before Starlin Castro doubles to center field. Rodriguez vs Aramis Ramirez. RBI single to right, just over Espinosa's glove, 9-8 Cubs when Castro crosses.

0. SHARK: Roger Bernadina's leadoff single in the Nats' eighth is the Nationals' first since the fifth and only the third hit since the Nats scored seven runs on eight hits in the third. Bernadina steals second with Ryan Zimmerman up after a Danny Espinosa K, and the Shark takes third on a groundout by Zimmerman before scoring on a two-out RBI single to center by Michael Morse that ties it at 9-9 after eight. Unbelieveable. Henry Rodriguez comes back out for a second inning of work, and he gives up a leadoff single to Geovany Soto. Marlon Byrd bunts into a force at second when Rodriguez cuts down the lead runner, but Byrd's pinch runner, Tony Campana, steals second and scores on a two-out double by Darwin Barney that puts the Cubs up 10-9 after eight-and-a-half.

-1. Officially Blown: Carlos Marmol's on to close it out for the Cubbies, and he hits the first batter he faces. Rick Ankiel's on. Wilson Ramos bunts Ankiel over to second and a wild pitch with Matt Stairs up allows Ankiel to take third. Stairs? Pops out to the infield. Two down. Marmol walks Laynce Nix and there are runners on first and third with two down. Roger Bernadina flies out to right to end it. The Cubs battle back and somehow win. 10-9 final

• Miss The Game? This One Hurt...But The DC Faithful Were Watching... 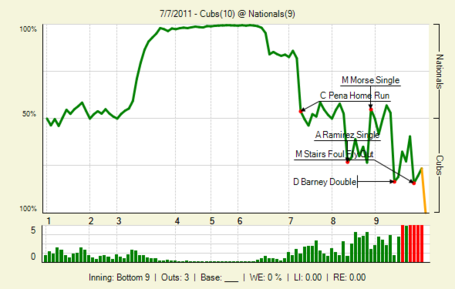