5. CHOMP!: Roger "The Shark" Bernadina made another highlight reel catch last night, diving for a ball on the track in left-center to rob the Cubs' Starlin Castro of extra bases. At the plate, the Nats' CF/LF is 6 for 16 in the last three games, and 7 for 17 after he doubles to lead off the Nationals' first tonight. A four-pitch walk by Danny Espinosa moves Bernadina into scoring position at second and Bernadina takes third on an infield hit by Ryan Zimmerman before scoring on a sac fly to right by Michael Morse. 1-0 Nats. Second and third with one down. Jayson Werth K's swinging as the Nats' pull a double steal with Espinosa and Zim, but Rick Ankiel strands them both in scoring position when he pops out to end the first. 1-0 Nats.

John Lannan threw 12 pitches in a scoreless first, the twelfth a full-count curve to Todd Helton that got the Colorado first baseman looking. Lannan gets the first out of the second with one pitch that Ty Wiggington rolls out to Michael Morse at first, and the Nats' left-hander strikes the next two Rockies' out for 3 K's through two scoreless. It takes Lannan 18 pitches in the third, but he retires the Rockies in order again, adding another K when Ian Stewart goes down swinging to start the frame, and the Nats' lefty is through the order once on 44 pitches, 31 strikes.

Lannan collects his fifth K of the day from the first batter in the fourth, Carlos Gonzalez, but Rockies' shortstop Jonathan Herrera connects for Colorado's first hit on a single back up the middle that buzzes Lannan on the mound. Todd Helton lines to right for the Rockies' second hit and their third, another liner back to the mound off Ty Wiggington's bat, hits Lannan flush on the face, knocking him out of the game. Run scores, the ball ends up in the outfield. Lannan's done...

• Davey Johnson: "It's a manager's worst nightmare. We're very fortunate [with] the amount of damage, that ball was smoked, and the thing is he got his glove up to deflect it off so it wasn't even too bad, and I think he's going to be alright, he may not even miss a start with the All-Star break, and so that's a blessing there. But, it was dangerous."

3. Former Rockie: Ryan Mattheus is up and out on the mound in a hurry with Lannan injured. Tied at 1-1. Mark Ellis grounds into a force at second, but moves Todd Helton to third in the process, so a balk by Mattheus, a former Rockies' prospect, forces the go-ahead run in. 2-1 Rockies, and 3-1 on Rockies' outfielder Cole Garner's first major league hit, an RBI line drive to left that gives Colorado a two-run lead. Make that a one-run lead. Two down in the Nats' fourth, and Rockies' starter Jason Hammel leaves a first-pitch fastball up for Wilson Ramos, who puts it over the wall in center and into the tables behind the seats in the Red Porch. Ramos' eighth HR of the year. 3-2 Rockies after four.

2. Contact: Jayson Werth's two-out line drive single to center in the bottom of the sixth is one of only two Nats' hits since the first. The other was Ramos' HR. Rockies' starter Jason Hammel gets a grounder back to the mound from Rick Ankiel and he's through six with the lead on 90 pitches, 61 strikes. Nats' lefty Sean Burnett's back for his second inning of work in the seventh, and he issues a leadoff walk to Ty Wiggington, who steals second on the pitcher but is stranded three outs later. 2.0 scoreless for Burnett, still 3-2 Rockies after six and a half...Ian Desmond singles with one down in the seventh on a sharp line drive to right and when Nats' Skipper Davey Johnson sends Matt Stairs to the mound, Rockies' Skipper Jim Tracy counters with a lefty, Matt Reynolds. Johnson burns Stairs to get pinch hitter Jesus Flores up, but Desmond's caught stealing and the Nats' backup backstop K's. 3-2 Rockies after seven.

1. 37 Pitches: Tyler Clippard throws a 12-pitch top of the eighth, and after the Nats go down in order, the All-Star reliever's back on the mound with Washington still down by one, 3-2 Rockies in the ninth. Clippard walks the leadoff man, Jonathan Herrera and one out later issues the second walk of the inning to Ty Wiggington.That's the first time Clippard's walked two in one game since May 22nd in Baltimore...before that April 12th...Clippard recovers, however, and strands both runners when he pops up Mark Ellis and gets a fly to center from Jason Giambi. It takes Clippard a season-high 37 pitches to get through the frame though, and the Nats still trail by one.

0. Strike'em Out Throw'em Out: Huston Street's on to close out the Rockies' win. Michael Morse reaches on a bloop single to center that drops in in front of Carlos Gonzalez. One on, Bixler runs for Morse. Jayson Werth gets down 0-2 quickly, takes a ball, and K's swinging on a pitch in the dirt, Werth's out, Bixler's thrown out trying to take second, and when Rick Ankiel K's it's over. Rockies win, 3-2 final. In the post game press conference, Davey Johnson was asked if he thought about bunting with Werth up and Morse on first, even though it's not his style. "Not my style," Johnson said, "I think about everything, but..." 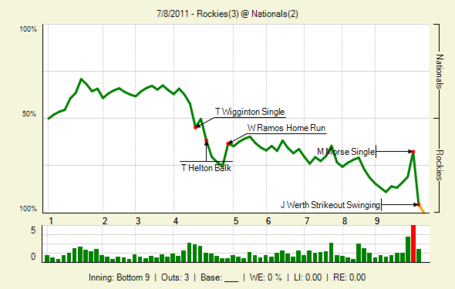