5. Sori-ANKIEL!: In his first at bat as an Atlanta Brave, former Astros' outifelder Michael Bourn, acquired in a 4-for-1 deal before Sunday's Non-Waiver Trade Dealine, lines to left field for a leadoff single off Nats' right-hander Livan Hernandez. Martin Prado connects with 2-2 curve that he pulls all the way to left and just foul of a HR, so Livan throws it again and gets a sharp line drive to third with Bourn running so that's he's easily doubled up by Ryan Zimmerman, who stabs the liner and throws to first. Rookie of Year candidate, (who'll probably lose out to his teammate) Freddie Freeman K's swinging and Livan's through a scoreless first. Nats' leadoff man and center fielder B.J--Denar---Rick Ankiel? Leadoff HR! Ankiel's all over a 1-1 change from Jair Jurrjens and his fourth HR of 2011 sails over the out-of-town scoreboard. 1-0 Nationals. Three outs later, Braves' second baseman Dan Uggla extends his hitting streak to 23 games with his 21st HR of 2011. The former Marlins' infielder pushes an opposite field blast over the out-of-town scoreboard for his own leadoff blast. 1-1 after one and a half...

4. How Dare You, Jair!: Jayson Werth's 21st double is sent screaming by third and into left field as he leads off the Nats' second with a two-bagger. Laynce Nix's groundout moves Werth to third, but Ian Desmond fails to drive him in, popping out to short center for the second out. The Braves choose to walk Wilson Ramos to bring Livan Hernandez up to bat and the Braves' starter buzzes the Nats' right-hander who's 2 for 2 with a double and a HR off Jair Jurrjens in both of their careers. Bad move, Braves. Livan Hernandez goes with a 1-1 fastball and shoots it through second to bring Werth in two outs after he'd doubled. 2-1 Nationals. Livan's 3 for 3 vs Jurrjens.

3. The New Sanchez And Wilson: Ryan Zimmerman starts a big double play in the first when the Braves threaten early. A one-out single by Jose Constanza in the third is erased by Wilson Ramos, who guns the speedy Atlanta outfielder down at second on a stolen base attempt and it's the Nats' middle infielders who help Livan Hernandez out of trouble in the fourth. Bases loaded with one down after back-to-back singles by Freddie Freeman and Dan Uggla and a HBP on Jason Heyward, but David Ross does what Livan wants him to and sends a 1-1 slider out to short for Ian Desmond, Danny Espinosa (who avoids a charging Heyward) and Michael Morse who scoops the throw out of the dirt. 6-4-3, inning-ending DP. Alex Gonzalez leads off the Braves' fifth with a single, but the Hernandez jumps all over a bunt from Jurrjens and starts a 1-6-3 DP. One out later it's 2-1 Nats after four and a half.

2. ANKIELLED IT!!: Rick Ankiel was a Kansas City Royal when he last hit two HR's in one game back on April 17, 2010 against the Minnesota Twins. Before that it was June 25 of 2008 when he was a St. Louis Cardinal and hit two off the Detroit Tigers in Interleague Play. The Nats' center fielder does it again tonight, the fifth time he's hit two out in one game in his 9-year career. Jurrjens feeds Ankiel a 2-2 fastball inside and Ankiel turns it around and sends it soaring out to right and into the second deck, 3-1 Nats. The Nats chase Jurrjens in the sixth when Michael Morse rrrips a single by third and scores a Jayson Werth walk later on a Laynce Nix RBI single to center. 4-1 Nats and 5-1 when Werth scores on a Desmond groundout. Jurrjens is done, and he's allowed 15 hits and 11 earned runs in his last two starts against the Nats.

1. Davey Trusts Pen: Livan Hernandez is pinch hit for in the 6th, (6 H, 1 ER, 0 BB, 3 K's) so it's Todd Coffey in the 7th and the big right-hander gets two outs before giving up a solo blast by Braves' backstop David Ross. Ross sends a 2-0 fastball out to left and just over the wall. Ross' 5th HR of 2011. 5-2 Nats after seven. Ryan Mattheus gives up a one-out infield single by Jose Constanza and a throwing error by Danny Espinosa gives the Braves' outfielder an extra base, but the Nats' right-hander gets a grounder to second from Bourn and pops Prado up to right. 5-2 Nats after eight.

0. STOREN WARNING!!!!: Freddie Freeman lines out to right. ONE! Dan Uggla destroys a 2-2 slider. Just creams it. Straight to left on a line and ten rows up into the stands. 5-3 Nats on Uggla's second of the game. Jason Heyward singles to bring the tying run to the plate. Storen gets behind David Ross 3-1, but blows him away with back-to-back 96 mph heaters. TWO! Alex Gonzalez grounds out to third, Zimmerman takes the force at second, ballgame. 5-3 Nats win in 2:30. Livan's 6th curly-W. Storen's 27th save. The Nats' third-straight win and 52nd overall. 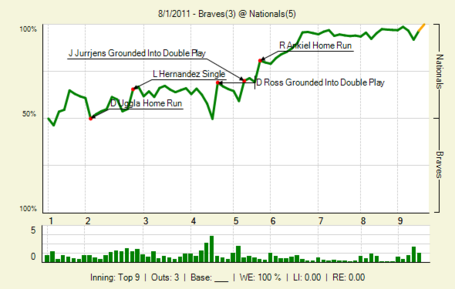