Share All sharing options for: Solo HR's Cost Washington Nationals In 4-2 Loss To The Chicago Cubs.

5. Hit Streak Kid: A two-out single through short off Rodrigo Lopez gives Nats' third baseman Ryan Zimmerman hits in 18 straight games going back to July 22nd in the first game of Washington's three-game series on the road in Los Angeles when he went 2 for 5 against the Dodgers. Zimmerman scores from first on what should be out no.3 for the Cubs starter, but Chicago shortstop Starlin Castro throws it by second into right going for the force on a grounder by Michael Morse. Zimmerman scores on the error and Morse takes third, but Jayson Werth K's swinging to end the top of the first. Starlin Castro stretches his hit streak to ten games with a grounder off Ross Detwiler's glove and by Ian Desmond at short in the Cubs' first, but Castro tries to take second and gets gunned down by Desmond, only to have Nats' second baseman Danny Espinosa drop it, "Saf--," but Castro slides over the bag, "Out." That was fun. Detwiler gives up a second single but completes the scoreless frame two outs later, stranding Reed Johnson at the end of the first. 12 pitches, 7 strikes...

4. Soto HR: Geovany Soto ties the game with one swing, sending a towering fly ball to left and...just...fair. GONE. Solo HR, the 12th of 2011 by the Cubs' catcher on a 2-2 sinker from the Nats' lefty. 1-1 game. Detwiler gets the next three Cubs in order and finishes the second having thrown just 26 pitches. After the Nats go down in order in the top of the third, the 25-year-old left-hander throws a 15-pitch frame in which he allows a two-out single but nothing else. Jayson Werth sneaks a two-out single under Starlin Castro at in the fourth for the Nats' second hit, but Jonny Gomes flies to left to strand Werth at first.

3. The Legend of the Arm: A one-out walk in the fourth comes back to haunt Ross Detwiler. The Nats' lefty puts Cubs' catcher Geovany Soto on with one down and Soto scores one out later when Alfonso Soriano goes against his scouting report with a fly to right that drops just inside the line near the brick wall of stands extending out into right. Jayson Werth slides, but can't come up with it and Soto scores from first. 2-1 Cubs. Detwiler walks the Cubs' second baseman Darwin Barney to get to the opposing pitcher, but only Rick Ankiel's arm saves him from giving up another run when the pitcher lines a single to center. Soriano pulls up at third out of respect for the legend. The story of Ankiel's arm saves Detwiler from further damage as he strikes Starlin Castro out with the bases loaded to end the fourth, 2-1 Cubs.

2. Curse Of the Second-Time Through: Detwiler surrenders the second solo shot of the night in the 5th, serving up a 1-2 curve that Reed Johnson deposits in the left-center bleachers. Johnson's 5th HR of the year. 3-1 Cubs. Detwiler's up to 84 pitches by the time he's out of the fifth, and as the Cubs' announcers point out, he's once again fallen pray to the second-time through the lineup curse:

1. Aroo?: Jayson Werth gets the Nats within one when he takes Rodrigo Lopez deep to left for a two-out solo HR off the Cubs' right-hander in the top of the 6th. Lopez hangs an 0-1 slider that Werth drives out to left field for his 14 HR of 2011. 3-2 Cubs. That's Lopez's last pitch. Jeff Samardzija gets the final out of the frame. Nats' RHP Collin Balester replaces Detwiler after 5.0 IP by the Nats' lefty, but after striking out Marlon Byrd with a 1-2 curve, Balester gives up the Cubs' third solo HR of the game when he feeds Alfonso Soriano a fastball that's not far enough outside. Soriano pulls it out to left and GONE. 4-2 Cubs on Soriano's 20th. Balester gives up a one-out double that almost goes out before striking out the last two Cubs to K the side in the sixth.

1. Where'd The O Go?: Danny Espinosa reaches on a bunt single in the eighth, but he's erased on a 6-4-3 DP off Ryan Zimmerman's bat. The Nats come up empty and trail by two going into the Cubs' eighth. Washington's had at least a hit six of eight innings, but they have just the two runs after eight, having gone 0 for 4 with RISP while stranding five runners total. Henry "Lightning" Rodriguez comes back out for the eighth after a scoreless seventh, and gives up a one-out walk to Alfonso Soriano but that's it. 2.0 scoreless for Rodriguez. Werth, Gomes and Desmond vs Carlos Marmol in the 9th. Werth K's swinging. Gomes K's looking. Desmond down swinging. Nats drop a 4-2 decision to the Cubs. 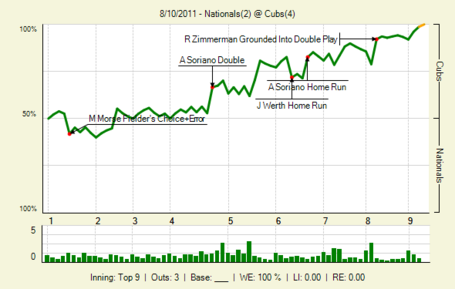