Washington Nationals Threaten Late, Come Up Short In 4-3 Loss To The Chicago Cubs.

Share All sharing options for: Washington Nationals Threaten Late, Come Up Short In 4-3 Loss To The Chicago Cubs.

5. THE KIDS CALL HIM ZIM!!: Ryan Zimmerman's up with no one on and two down in the first. The Nats' 26-year-old infielder's sitting on a 19-game hit streak. Cubs' right-hander Ryan Dempster throws a 2-1 slider to the Washington Nationals' first 1st Round pick and Zimmerm--THE KIDS CALL HIM ZIM!! THE KIDS CALL HIM ZIM!! Solo HR to left and out of Wrigley. Clear over the bleachers. Zim hits one onto Waveland Ave. 1-0 Nats on Zim's 6th HR of 2011. Throw it back, Cubs fan on the street! It still counts. Nats' right-hander Jordan Zimmermann, (no relation, two "n's") gets the first two outs of the Cubs' first on grounders, back to the mound and out to short, before Aramis Ramirez doubles off the ivy to the right of center field. An infield pop off Carlos Pena's bat ends the Cubs' first however, with the score 1-0 Washington...

4. THE OTHER ZIM(N)!!: After an eight-pitch 1-2-3 second, Jordan Zimmermann's at 22 pitches through two scoreless innings of work in the afternoon series finale in Wrigley. The right-hander's back out on the mound pretty quickly after Danny Espinosa takes a two-out walk in the top of the third and gets thrown out trying to steal second. Zimmermann surrenders the second hit of the game when Cubs' backup catcher Koyie Hill singles through second. A sac bunt and fly to right later Hill's still on second when Reed Johnson battles and comes away with a two-out single to left that moves the catcher to third. Aramis Ramirez pops out to second to strand two Cubs and Zimmermann's up to 39 pitches after a 17-pitch third.

3. Two-Hitter: Ryan Dempster's allowed only one hit and one run through four, but he's at 71 pitches after retiring the heart of the Nats' order in order. Jordan Zimmermann gives up a one-out single to right-center by Marlon Byrd in the home-half of the fourth, and Byrd scores when Alfonso Soriano triples to right on a fly Jayson Werth dives for but misses. 1-1 in the fourth. Zimmermann gets the second out on a pop to second and walks the catcher to get to the opposing pitcher with two on and two out. Swinging K to leave two stranded. Zimmermann's up to 57 pitches after an 18-pitch inning. Wilson Ramos singles with two down in the Nats' fifth, the Nationals' second hit, but he's stranded when Jordan Zimmermann K's looking to end the top of the frame.

2. CS? Twice?: Jordan Zimmermann gives up a one-out single to Reed Johnosn in the Cubs' fifth and then proceeds to strike Carlos Pena and Aramis Ramirez out, both with fastballs. A 95 mph heater Ramirez manages to tip ends up in Wilson Ramos' mitt and then Zimmermann blows Pena away with a 94 mph full-count heater for his fourth K of the day. 1-1 game after five, and the Nats' right-hander's up to 75 pitches. Dempster's at 81. After walking and getting caught stealing with Ryan Zimmerman up in the third, Danny Espinosa singles in the sixth, collecting the Nats' third hit off the Cubs' starter, but Espinosa gets caught stealing again, and after Zimmerman K's swinging it's tied at 1-1 after six.

1. NOT MORSE!!!: Jordan Zimmermann issues a two-out walk to Cubs' second baseman Darwin Barney in the bottom of the sixth but he strikes Koyie Hill out looking to keep it tied at 1-1 through six. Ryan Dempster throws an 0-2 fastball inside on Morse and hits the Nats' hard-hitting first baseman in the elbow. The big man is hurt. And he leaves the game. Jonny Gomes comes on to run and Dempster strikes out Werth before getting a double play grounder off Laynce Nix's bat to erase Morse's pinch runner and keep it tied at 1-1 after six and a half.

0. 107 Pitches: After he gets a foul-tip strike three from pinch hitter Tony Campana, Jordan Zimmermann backs Starlin Castro off the plate with an 0-2 fastball inside that gets a rise out of the Wrigley Field crowd and they "ooooh" even more when the Nats' right-hander strikes their shortstop out. Reed Johnson keeps the inning alive, however, with a two-out single to right on an 0-2 fastball, and Johnson gets Aramis Ramirez up so the Cubs' third baseman can give the Cubs the lead with a two-run HR to left that falls into the first row of seats above the ivy and the basket. 3-1 Chicago. Make that 4-1 as Carlos Pena gets hold of an 0-1 change and pulls it all the way to right and just fair, out of the park onto Sheffield Ave. Zimmermann's done after 107 pitches.

-1. RoboBix: Ian Desmond doubles off Cubs' right-hander Jeff Samardzija and takes third on a wild pitch, but Wilson Ramos K's swinging. One down. After a few switches, it's Brian Bixler vs Cubs' lefty Sean Marshall, and the Nats' bench bat comes through with an RBI infield single, driving Desmond in with a weak roller to short and beating Starlin Castro's throw to first. 4-2 game. Rick Ankiel singles! Two on, one out. It's going to be Kerry Wood vs Danny Espinosa. Backwards K with an 0-2 bender outside. Ryan Zimmerman swings through 97 mph 1-2 heater, strike three. 4-2 Cubbies.

-2. Bases Loaded FAIL: The Nats threaten in the ninth with the first two batters reaching on Cubs' closer Carlos Marmol. Jonny Gomes takes a leadoff walk and Jayson Werth reaches on a sharp grounder to third Aramis Ramirez can only knock down. Two on, 0 outs. Laynce Nix walks to load the bases. Ian Desmond K's chasing a low 2-2 slider. Wilson Ramos hits one straight down and reaches safely on an infield single. One run scores, 4-3. Still loaded, one out. Brian Bixler K's on a check-swing strike three chasing a slider waaaaay outside. Rick Ankiel flies out to center. Bases loaded, 0 outs, and one run on an infield single. 4-3 Cubs win.

• Miss The Game? The DC Faithful Were Workin...I Mean, Watching, Sort of... 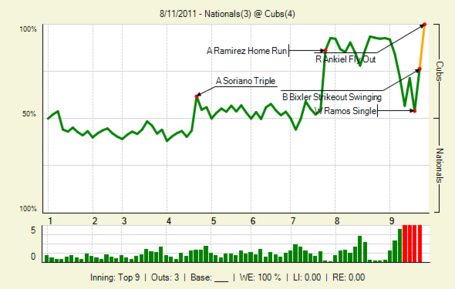