5. Back to Philly: Jayson Werth stepped up with two on and two out in the first in Citizens Bank and heard more boos than cheers this time around after being greeted warmly when he tipped his cap to the Philly fans earlier this season in his first game back in Philadelphia. The crowd erupts, however, when the former Phillies' outfielder goes down swinging through a 2-2 cutter from Cole Hamels to strand two in a 24-pitch scoreless first by the Philly left-hander. Livan Hernandez gives up three hard hit balls to second in the bottom of the first. Danny Espinosa throws Jimmy Rollins out from the short right grass, then catches a low liner off Shane Victorino's bat on a diving play and he's out in right waiting for a groundout from Chase Utley for out no. 3. Eight pitches by Livan...

4. Livan Giveth And, Uh Giveth: Hamels surrenders a single to Wilson Ramos, who lines to left, and the third walk of the night to Laynce Nix to put two on with no one out in the second. The Phillies' lefty gets Ian Desmond swinging through a 2-2 fastball up high, but he can't get Livan "DIY" Hernandez out. The Nats' starter singles through short off Jimmy Rollins' glove to drive in the first run of the game, 1-0 Nationals. Rick Ankiel singles to center on an RBI grounder that makes it 2-0 Nats, and Hamels is up to 46 pitches after just 2.0 IP. An error by Espinosa in short right on a bad hop puts Ryan Howard on to start the Phillies' second and a one-out single and sac fly put Howard at third so he can score on a two-out RBI liner to center by Wilson Valdez that cuts the Nats' lead in half, at 2-1 after two.

3. Chase Hamels, Or Chase Utley, Hamels Chased?: The Nationals go down in order on nine pitches in the third, six pitches in the fourth, and Livan Hernandez is back on the mound in Citizens Bank Park trying to hold on to a 2-1 lead. A leadoff single through the shift by Ryan Howard starts the Phillies' fourth but Livan strikes Hunter Pence out with a 67 mph 2-2 curve and pulls a 4-6-3 inning-ending DP out of Raul Ibanez to hold the Nats' lead through four innings in Philadelphia. Cole Hamels loads the bases with no out out in the fifth when he walks Ryan Zimmerman after back-to-back singles to start the frame by Ankiel and Espinosa. Jonny Gomes gets up 3-0 but pops up a full-count fastball. Jayson Werth brings in a run with a groundout to first, 3-1. Wilson Ramos K's swinging to let Hamels out with minimal damage.

2. DIY LIVAN: Livan Hernandez retires the Phillies in order in the 5th on 13 pitches, then drives in the Nats' fourth run with his second RBI single of the game, knocking Ian Desmond in after Desmond's one-out ground-rule double to left off Philly righty Kyle Kendrick, 4-1 Nationals. Back on the mound, Livan throws a 12-pitch, 1-2-3 sixth which leaves him at 79 pitches with a 3-run lead after six innings in Citizens Bank.

1. Angry Livan Lifted: Pitch no. 80 is a change lined to right through the shift by Ryan Howard for a leadoff single in the Phillies' seventh. Hunter Pence is 0 for 3 with 2 K's after he rolls a 1-6-3 DP back to the mound for Livan Hernandez who turns, throws to second for Ian Desmond and on to Laynce Nix. Two down, but a two-out walk to Raul Ibanez ends the Nats' starter's night after 6.2 IP, 4 H, 1 R, 0 ER, 1 BB, 3 K's, 89 pitches, 51 strikes, 7/6 GO/FO. 4-1. Tyler Clippard gets a fly to right off Carlos Ruiz and Jayson Werth catches it coming in with a slick sliding grab. 4-1 Nationals after seven innings in CBP.

0. Clipp/Storen: Tyler Clippard's back out for the eighth, and he throws a quick 1-2-3 fifth on 15 pitches to hold the Nats' 4-1 lead through eight innings. Drew Storen's on in the ninth after the Nats fail to add to their lead in the top of the frame. Shane Victorino reaches on a grounder back to the mound that's off Storen's glove for an infield single. Chase Utley singles through the right side, under Alex Cora at first. Victorino takes third. Storen gets Ryan Howard swinging with a 1-2 slider. Hunter Pence flies to right, Victorino tags and scores, just ahead of a throw by Werth. Raul Ibanez, who's killed the Nats...Pops up. Ballgame. 4-2 Nats. Livan gets the curly-W. Storen gets save no. 31. 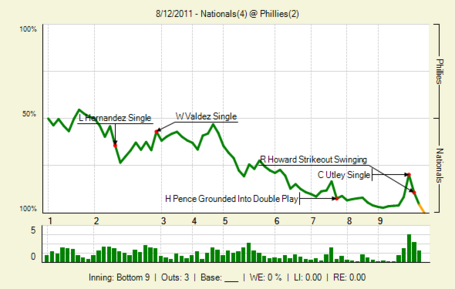