5. Nats Pick Wang Up: Chien-Ming Wang's fourth start of the year, after two days off courtesy of a rainout and scheduled off day is his first since a surprisingly strong six inning outing against Chicago last week in which he allowed just one hit while holding the Cubs scoreless. The right-hander struggles early tonight in Nats Park, giving up a leadoff single on a 2-2 sinker Drew Stubbs lines to right, and a walk to Joey Votto with one down before back-to-back RBI singles by Jay Bruce and Ramon Hernandez have the Reds up 2-0 before the Nationals come to bat.

Washington rallies in the bottom of the frame, however, with Rick Ankiel and Ryan Zimmerman singling an out apart in front of Michael Morse, whose 29th double drives Ankiel in to cut the Reds' lead in half. 2-1 Cincinnati. A walk by Jayson Werth loads the bases, but Laynce Nix K's swinging, leaving it up to Ian Desmond, whose broken bat single through short into center drives two runs in to give the Nats the lead. 3-2 after an inning in Nats Park.

4. Oppo-Boppo Blast: After throwing 33 pitches through two, Chien-Ming Wang retires the Reds in order on ten pitches in the third to hold the Nats' one-run lead through two and a half. Michael Morse makes it a two-run lead with his 21st HR of 2011. Mike Leake throws a 2-1 slider to the Nats' slugger who pushes it out to right for an oppo-boppo blast over the out-of-town scoreboard in right. Line drive HR. 4-2 Nats. Chien-Ming Wang retires the Reds in order on four pitches in the top of the fourth and the Nats add another run on a two-out grounder by Rick Ankiel that bounces off Joey Votto at first allowing Wilson Ramos to score from third after he'd doubled and advanced on a productive groundout by Wang, 5-2 Nats after four.

3. THE KIDS CALL HIM ZIM!!: After a ten-pitch fifth by Wang, in which he retires the twelfth-straight batter following a error by Ryan Zimmerman that led off the second, the Nats' third baseman gives his starter another run to work with when he launches a 1-0 fastball from the Reds' starter to left and almost on to the concourse beyond the left field stands. Zimmerman's HR off Leake is his seventh, and it makes it 6-2 Nats. Chien-Ming Wang gives one back when he gives up the first hit since the Reds' first on a leadoff double by Joey Votto, who scores two outs later on an RBI groundout that makes it 6-3, but the Nats' right-hander strands two runners and he's at just 71 pitches after his sixth inning of work.

2. Too Long?: Chien-Ming Wang gives up a leadoff single by Fred Lewis in the top of the seventh, and one out later he allows the Reds back within two when he surrenders an RBI double off the center field wall by Edgar Renteria, who hurts himself on the play. 6-4 Nats. Wang's done seven pitches into the seventh. Wang's Line: 6.1 IP, 7 H, 4 R, 4 ER, 1 BB, 0 K's, 78 pitches, 51 strikes, 9/4 GO/FO. Tyler Clippard gets a weak pop to second from Votto and a swinging K from Brandon Phillips. Renteria's pinch runner's stranded on second. 6-4 Nats in the 7th.

1. Clipp/Storen: Tyler Clippard gives up a broken-bat, two-out single over short in the eighth, but pops Reds' 3B Todd Frazier up for the final out of inning. 25 pitches, 16 strikes, one K, three pops to the infield. Drew Storen takes over in the ninth, still 6-4 Nationals. Pinch hitter Dave Sappelt can't check his swing on a wicked 0-2 slider from Storen. One down. Drew Stubbs chases a 1-2 slider off the outside edge. Two. Paul Janish lines to left, and it's a sharp one, but defensive replacement Brian Bixler  makes a sliding catch to end the game. Save no. 32 for Storen. Wang's second-straight win, the first time he's won two in a row since 2008. 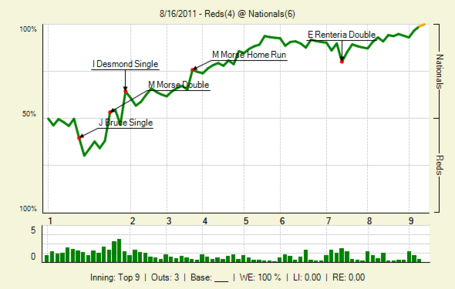