Share All sharing options for: Washington Nationals Win Big, 9-3 Over The Atlanta Braves On HR's By Michael Morse And Ian Desmond, Grand Slam By Rick Ankiel.

5. Revisiting Chipper Quotes: Future Hall of Fame third baseman Chipper Jones offered high praise for Nats' lefty John Lannan when he sat in on the FOXSports South broadcast during the Nationals last series against the Braves in Atlanta. "John Lannan's been a tough matchup for us over the last couple of years," Jones said. The switch-hitting Braves' slugger has a .321/.406/.357 slash with a double, four RBI's, four walks and four K's in 32 plate appearances against Lannan in the 26-year-old '07 11th Round pick's four-plus seasons in the majors. The Braves, as a team, have a .233/.327/.302 slash against the lefty in 2011.

"He just doesn't throw anything in the middle of the plate," Jones continued, "and he doesn't try to do the same thing twice in a row. If he throws you a cutter away he's gonna four-seam you in. If he throws you a cutter in, he's gonna sink you away. That's what he's done." Lannan's doing it again early against Atlanta tonight in Nats Park, setting the first six Braves down in order on 24 pitches, and he's got a lead to work with when he steps back on the hill in the top of the third...

4. Bottom of the Second: Jayson Werth, who's hit in 15 of 54 second-half at bats (.278/.400/481) before tonight's game, starts the second of three with Atlanta with a single over second and into the right-center grass. That's exactly where David Ross' throw to second ends up as Werth slides in safely at second with stolen base no.14 of 2011 by the Nats' right fielder. Werth takes third on the throwing error and scores on a sac fly by Ian Desmond, 1-0 Nats in the second.

3. Give It Back: The Braves finally get to Lannan in the third, collecting their first two hits, both singles, to right by David Ross and to left by Jose Constanza. The Braves score their first run on a one-out RBI double by Michael Bourn and their second on an RBI groundout by Martin Prado. 2-1 Braves. Lannan's up to 39 pitches when he steps back on the mound in the fourth and strikes out Dan Uggla. It's back-to-back singles again, however, with Martin Prado lining to left-center in front of Brooks Conrad, who sends a sharp grounder by third. Two on, one out. David Ross flies to right. Two down. Jose Constanza lines on an 0-2 two-seamer over Ryan Zimmerman's head and into left for a soft two-out RBI single. 3-1 Braves.

2. ANKIELLED IT!!: Jonny Gomes takes a one-out walk from Derek Lowe in the Nats' fourth. Ian Desmond and WIlson Ramos follow with singles and the bases are loaded for Long Ball Lannan. John Lannan grounds to first, Freddie Freeman throws home, but Gomes takes out the Braves' catcher, who was off the plate anyway. "Safe," yells the ump. NatsTown is liking Gomes. Bases still loaded, and Lowe throws a 2-0 fastball to the hot-hitting center fielder and RICK ANKIELS IT!! Grand Slam to center! 6-3 Nats just like that.

• As @NationalsPR points out, the 32-year-old outfielder is 21 for 62 (.339) with three doubles, five HR's and 14 RBI's since he returned from the DL on July 1st. Ankiel's grand slam is his first grand slam since 8/31/07 when he hit one off the Cincinnati Reds' reliever "Everyday" Eddie Guardado.

1. 1st Since 4/28: Jonny Gomes had already won the crowd over with his hard slide into Braves' catcher David Ross when he hustled around the bases with a leadoff triple in the Nats' 5th to send NatsTown into a frenzy and the feeding on Lowe continues when Ian Desmond sends a first pitch fastball screaming into the first row of seats above the left field wall. Desmond's fourth HR of the season is the shortstop's first since April 28th when he took Mets' right-hander Chris Capuano deep. 8-3 Nats after five. 8-3 after five and a half after John Lannan collects K's no. 5-6 and 7. Season-high K's for Lannan and he strikes out the side on 11 pitches, leaving the left-hander at 94 pitches total after six innings pitched.

0. MORSE CRUSH!!: Right-handers just don't hit them out that way! Michael Morse collects HR no.18 of 2011 off Braves' right-hand Cristhian Martinez in the #Nats 6th. The Nationals' hard-hitting first baseman's been crushing the ball all night and his opposite field blast soars over the out-of-town scoreboard and keeps on going. Upper deck in right-center? Seriously? MORSE CRUSH!! 9-3 Nats. John Lannan gets two outs in the seventh, including his eighth K before two two-out hits knock him out of the game. Prado singles, Freddie Freeman doubles and Henry Rodriguez is out to face Dan Uggla with two on and two out. Lannan's line: 6.2 IP, 9 H, 3 R, 1 BB, 8 K, 110 P, 80 strikes. Lightning Rod throws a 2-2 fastball 99 on the black! STARE AT IT, Uggla!!! Rodriguez retires the Braves in order in the eighth and finishes them off in the 9th. 9-3 final. Nats win their fourth straight, taking their second-straight series... 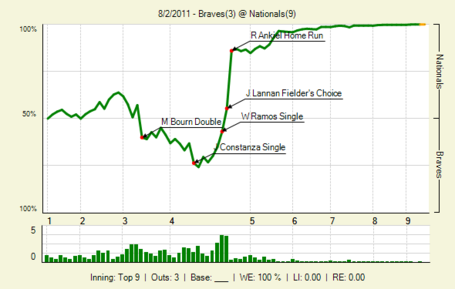