5. Two And A 1/2 Hours Later: The boos came raining down on Jayson Werth when his picture was shown on the Nationals Park scoreboard during the introductions for tonight's game between Werth's new team and his old team, the Philadelphia Phillies, for whom he patrolled right field for four years before signing with the Nats this past winter. Livan Hernandez takes the hill at 7:05 pm EDT, and two outs later, with a runner on first and Ryan Howard at the plate, the real rain starts when the sky opens up. We're in a delay...

Two and a half hours later it's back on. Hernandez walks Howard but gets an inning-ending grounder to third to end the top of the first. Roy Oswalt was scheduled to pitch, but after the delay, the Phillies go with Kyle Kendrick instead and the right-hander retires the Nationals in order on eight pitches.

4. "Let's Go Phillies!": There may not be enough Nats fans left in Nationals Park to drown out the Philly fans in attendance and they're growing more boisterous with every hit in the third. Jimmy Rollins nearly pulls a HR to left, but it sails foul, so he rips a sharp double by first off Laynce Nix into right and then scores on a triple to left by John Mayberry, Jr. that Jonny Gomes ill-advisedly dives for and misses. 1-0 Phillies as Gomes retrieves it. Chase Utley lines to right to drive Mayberry in, 2-0, and Ryan Howard and Hunter Pence follow with singles of their own, Howard's scores Utley, 3-0. What should be an inning-ending double play is just a force at second as Ian Desmond bobbles a tailor-made grounder off Raul Ibanez's bat. Carlos Ruiz, of course, follows with another RBI single, the sixth hit off Hernandez, and it's 4-0 Philadelphia. Wilson Valdez follows with a single to right and it looks like it will be 5-0 until Jayson Werth comes up throwing and nails Ibanez at home. 4-0 Phillies.

3. Rhino + +Range: Wilson Ramos sends a bloop out to right-center that no one can get to for the Nationals' first hit of the night off Kyle Kendrick in the third, and after Livan Hernandez's sac bunt moves Ramos to second he scores on an Ian Desmond double to center that soars over John Mayberry, Jr., just off his glove, 4-1 Phillies. After a 23-pitch third in which Hernandez gave up seven hits and four runs, the right-hander retires the Philly batters in order in the fourth on 12 pitches.

2. RHINO SOLO: Tom Gorzelanny replaces Livan Hernandez in the fifth and retires Utley, Howard and Pence in a 13-pitch, 1-2-3 5th. Wilson Ramos is up with one down in the Nats' half of the frame, and after singling and scoring on Desi's double in the third, Ramos cuts into the Phillies' lead again with a solo HR to left and into the visitor's bullpen on a first-pitch fastball from Kendrick. Ramos' 10th makes it a 4-2 game after five. Gorzelanny gives up a one-out double in the sixth when Carlos Ruiz tucks a liner to left inside the line, but an unassisted DP by Ian Desmond at short gives the Nats' lefty two scoreless. Wilson Valdez lines to short, Desi makes a leaping grab abd steps on second to double up Ruiz. Ryan Zimmerman doubles to the left-center gap on the first pitch of the Nats' sixth. Two outs later he's still on second when Danny Espinosa takes a two-out walk in front of Jonny Gomes, who lines out to third, still 4-2 Philadelphia.

1. Pens Mightier Than Bats?: Tom Gorzelanny throws 3.0 scoreless frames, allowing just one hit. Sean Burnett comes on in the eighth and strikes two out before giving up a two-out walk that only momentarily delays the completion of his own scoreless innings of work. The Phillies' pen is just as strong, however, with Brad Lidge and Antonio Bastardo shutting the Nats down after Kyle Kendrick is pinch hit for in the seventh. Still 4-2 Phillies after eight. Todd Coffey sprints to the mound and throws a scoreless top of the ninth. One hit and one walk allowed by the Nats' pen in 5.0 innings of work.

0. RALLY: Jayson Werth hears boos again as he steps in against Ryan Madson in the ninth, and Werth's down 0-2 quickly, but battles back for a line drive single to left on the 11th pitch of the at bat. Danny Espinosa's down 0-2 too, but he drops a bloop into center on a two-strike change for the second straight single. Jonny Gomes connects for the third straight single, sending an RBI grounder through short that scores Werth from second, 4-3 Philly. Wilson Ramos pops a bunt up that Ryan Madson almost catches, but misses, sac executed. Pinch hitter Jesus Flores is walked intentionally, bases loaded, one out. Ian Desmond hits a blooper to short right, and it falls in! Espinosa scores! 4-4 game. Rick Ankiel K's swinging. Two down. Ryan Zimmerman works the count full and hits it out!!!!!!!!!!!!!!!!!!! HR!! NATS WIN!! NATS WIN!!!! Ryan Zimmerm--THE KIDS CALL HIM ZIM!! THE KIDS CALL HIM ZIM!!! 8-4 final.

Davey Johnson on Ryan Zimmerman: "He's one of those great players that's totally in control in those tough situations. He's very calm. The rest of us get a little excited, but he doesn't." 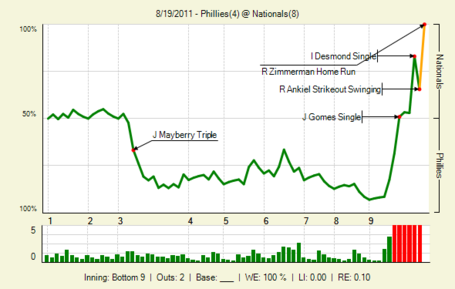