Washington Nationals Make Mistakes And Pay For Them, Lose 5-0 To Philadelphia Phillies.

Share All sharing options for: Washington Nationals Make Mistakes And Pay For Them, Lose 5-0 To Philadelphia Phillies.

5. Lannan vs Philadelphia: It took John Lannan fourteen starts over five seasons to finally beat the Philadelphia Phillies, and even then the Nats' 26-year-old left-hander needed four shutout innings from four Nats' relievers to hold on to a slim 2-1 lead courtesy of a Jayson Werth RBI single and a Laynce Nix solo HR. In Lannan's first outing after finally beating the Nationals' NL East rivals, last week in Philadelphia, the '05 11th Round pick was knocked out after just 3.0 IP in which he surrendered 7 runs, one earned, on four hits in an 11-3 loss, leaving Lannan (1-11) in his career against the Phillies. Before tonight's game, Nats' Skipper Davey Johnson was asked about Lannan's struggles, but he said it wasn't something that concerned him. "I really don't [worry]," Johnson said, "Lannan's still a young starting pitcher as far as I'm concerned. He's still learning about himself. He's still learning about his abilities and what he's capable of doing, and a lot of things are cyclical in this game.

Lannan looks fine in the first, retiring the Phillies in order and striking out Chase Utley to complete an 8-pitch 1-2-3 frame in Nats/Phillies Park. The Nationals start a two-out rally with a single through second by Ryan Zimmerman and an opposite field double by Michael Morse, but Laynce Nix K's swinging to strand two and end the first. 0-0 after one...

4. Moar Grounderz: Lannan gets himself in trouble in the second, however, issuing a leadoff walk to Ryan Howard and a one-out walk to John Mayberry, Jr. in front of Carlos Ruiz, who buzzes the Nats' lefty on a line drive single to center. Howard doesn't test Rick Ankiel's arm, stopping at third, but the bases are loaded with one down. Phillies' third baseman Wilson Valdez grounds to his counterpart on the Nats, and Ryan Zimmerman steps on third and fires home to complete the 5-2 inning-ender. Roy Oswalt retires the Nats in order in the second, popping up Jayson Werth and striking Danny Espinosa and Wilson Ramos out to complete two scoreless. Still 0-0 after two.

3. CS, E6, pitcher and first baseman get assists, Desi an E: Lannan works around a one-out single through short by Jimmy Rollins and completes a 13-pitch third before Roy Oswalt retires batters no. 5-6-7 in a row since allowing back-to-back two-out hits in the first. Lannan gives up a two-out single to John Mayberry Jr. in the Phillies' fourth, but he picks him off first. Lannan throws to Morse, Morse to Desmond at second, but the Nats' shortstop drops it. Mayberry's safe. Carlos Ruiz draws a two-out walk and both runners score on a two-out, two-run triple by Wilson Valdez. 2-0 Phillies. Two unearned. Ryan Zimmerman singles. Michael Morse walks. Two on, 0 outs in the Nats' fourth. Laynce Nix pops out foul of third. Jayson Werth singles to left, but Zim gets thrown out at home by John Mayberry, Jr. Not even close. Danny Espinosa K's swinging, 2-0 Phillies after four.

• Davey Johnson on Bo Porter Sending Zim: "By and large [Bo Porter] is pretty cautious and Zim's a good base runner, got a good jump, the ball was hit awful hard and he made [Mayberry] throw a perfect strike. If the ball was off the line at all he scores. I like being aggressive. I'll never got on [Porter] for being overly aggressive."

2. 1-0 Slider: Hunter Pence starts the Phillies' sixth with a solo shot to left on a 1-0 slider. 3-0 Phillies. Pence's 15th HR, his 4th in 19 games with Philadelphia. John Mayberry, Jr. and Carlos Ruiz follow with back-to-back singles to center and it's two on and no one out when Lannan's lifted. Collin Balester comes on and gets a force at third for the first out, Ryan Zimmerman makes an off-balance attempt at a double play, but the throw is late. First and second, one down for Oswalt, who bunts toward first, and Morse throws (late) to third, everyone's safe, bases loaded. Jimmy Rollins drives two runs in with a single to center, but Oswalt's thrown out at third. 5-0 Phillies after five and a half, but only after Bally loads the bases back up and gets Ryan Howard looking with a wicked 2-2 bender that really wasn't a strike.

1. 44,685: Danny Espinosa singles to start the Nats' seventh, but he's erased on DP grounder to second off Wilson Ramos' bat. Roy Oswalt gets help from Jimmy Rollins, who throws from short center to get pinch hitter Alex Cora at first on a grounder up the middle for out no. 3, 5-0 Phillies after seven in Nats Park...which is full. 44,685 in attendance. Largest crowd in Nats Park history. Oswalt comes back out for the eighth after the odd uneventful inning by Henry Rodriguez, and gets the first two outs before a Ryan Zimmerman single stretches him out. A groundout to short by Morse ends the eighth, however. Oswalt's Line: 8.0 IP, 8 H, 0 ER, 1 BB, 9 K's, 115 pitches, 82 strikes, 7/4 GO/FO. Michael Stutes retires the Nats in order in the ninth and there will be a rubber match tomorrow. 1:35 pm EDT. Wang vs Halladay. Tonight's final. 5-0 Phillies win. 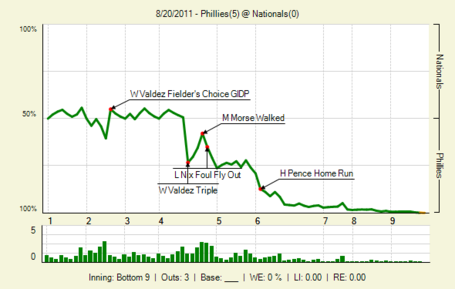