5. "Yeah, well, sometimes nothin' can be a real cool hand." - Cool Hand Luke: John Lannan can't get D-Backs' leadoff man Ryan Roberts to bite on a big 0-2 curve, or a 1-2 fastball upstairs, and the Arizona SS takes a 2-2 change before he lines a single to left-center on a full-count fastball. Roberts takes second as Gerardo Parra once again bunts for a single, but Lannan gets Justin Upton to line out to Ian Desmond at short, and Desi tosses to Danny Epinosa for the 6-4 DP. A walk to Chris Young doesn't hurt the Nats' lefty either, but he has to hustle over to first to cover on Miguel Montero's groundout, catching a toss from Espinosa that ends a scoreless top of the first. Ian Desmond and Ryan Zimmerman walk one out apart in the bottom of the inning, but Diamondbacks' lefty Wade Miley strikes Michael Morse out before getting a weak grounder to second out of Jayson Werth. 19 pitches, 9 strikes for Lannan, 21 and 12 for the D-Backs' lefty. 0-0 after one...

4. "Nah - calling it your job don't make it right, Boss." - Cool Hand Luke: A single to left by Right Side Danny Espinosa and a walk to Jonny Gomes give the Nats two on with no one out in the second, but Wade Miley retires the next three batters, allowing Gomes and Espinosa to advance on a double steal, but stranding them at second and third in another scoreless frame. John Lannan throws a nine-pitch 1-2-3 third, and the Nationals once again get runners on, with Brian Bixler and Michael Morse singling off the D-backs' Miley, but the lefty pops up Werth and strikes out Espinosa. 3.0 scoreless on 53 pitches for Miley. John Lannan gives up back-to-back one-out singles to center, but gets help from his Gold Glove third baseman as Ryan Zimmerman stabs a sharp grounder from Aaron Hill and throws to second where Danny Espinosa hangs in late and fires to first for the 5-4-3 inning-ending DP.

3. "I thought it was a nice round number." - Cool Hand Luke: John Lannan gets a grounder to third, one to Danny Espinosa behind second where he shows off his range and arm and one to short that Ian Desmond handles in an 8-pitch 1-2-3 fifth that sees groundouts no. 7-8 and 9 sent out to his infielders. 5.0 scoreless on 60 pitches. 9/0 GO/FO. Ryan Zimmerman doubles with two down in the fifth, and Michael Morse walks, but Jayson Werth flies out to right to end the fifth 0 for 3. The Nats are 0 for 8 w/ RISP. Lannan gives up a one-out single to Justin Upton, who lines a 1-0 change to left and then throws a first-pitch fastball to Chris Young and leaves it up inside. Young destroys it. Two-run HR to left. Towering shot. 2-0 D-Backs after five and a half.

2. "Yeah, them poor old bosses need all the help they can get." - Cool Hand Luke: Lannan gets no support, so the 2-0 lead stands through six. Todd Coffey replaces Lannan after Rick Ankiel hits for the pitcher in the home half of the sixth, and throws a 10-pitch, 1-2-3 top of the seventh. Ian Desmond's hit by a pitch (for the 2nd time tonight) from D-Backs' right-hander Bryan Shaw and the Nats have the leadoff runner on for the fourth time tonight. Brian Bixler's single to center allows Desmond to go first-to-third™ with no one out and Ryan Zimmerman up. Zim K's swinging. One down. Michael Morse gets jammed, but he powers a grounder back up the middle that scores Desmond from second to cut Arizona's lead in half, 2-1. Jayson Werth pops up to the infield. Danny Espinosa pops to left, Parra catches it pressed up against the wall in left. Nats down 2-1, and 1 for 13 w/ RISP.

1. " Oh Luke, you wild, beautiful thing. You crazy handful of nothin'." -Dragline: Tyler Clippard walks Justin Upton with one down, but strikes out Chris Young and throws an 0-2 fastball outside to Miguel Montero that looks like a strike to everyone but home plate ump Tim McClelland, and the D-Backs' catcher ends up lining to right on a 2-2 pitch to bring Upton around from first just ahead of a relay throw from Werth to Espinosa and on to Flores. Too late, and a nice slide around the tag by the D-Backs' outfielder. 3-1 Diamondbacks. Clippard goes to a full count with Paul Goldschmidt in the next at bat, and gives up a two-out, two-run HR to left on a 3-2 change that Goldschmidt hits over the stands and onto the concourse on a bounce. That should count for more than two. 5-1 Arizona.

0. "Yeah, that's what I thought. I guess I'm pretty tough to deal with, huh? A hard case. " - Cool Hand Luke: Jonny Gomes doubles off the out-of-town scoreboard for a leadoff hit in the eighth, but that just gives the Nats another chance to strand more runners in scoring position. Jesus Flores pops to left. Alex Cora pops to third, 1 for 15 with RISP tonight. Make that 16, Ian Desmond down swinging and David Hernandez has a scoreless frame. Arizona adds three runs in the ninth on an RBI sac fly to left and two RBI singles up the middle off a struggling Henry Rodriguez. 8-1 D-Backs and that's how it ends. Nats drop three of four to the NL West's best.

• Doghouse's Post Game WPA Graph: "Game 129: Bullpen and RISP fail so bad that I fled to Canada (they have internet there).": 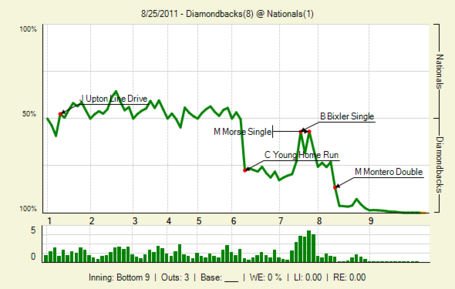