5. Dontrelle vs Chien-Ming: One-time Florida Marlins' starter Dontrelle Willis is (10-5) in 17 career starts against the Washington Nationals, but he hasn't faced the franchise since 2007 when he was (1-1) in 3 starts against the Nats pitching for the Fish. Washington had a .343 average against the left-hander in '07, scoring 12 runs, 6 earned in 17.0 IP in which he walked 6 and K'd 8 during his last year with the organization that acquired him in 2002 after the Chicago Cubs had selected him in the 8th Round of the 2000 Draft. Willis walks the first two batters he faces tonight, Ian Desmond and Brian Bixler, then strikes Ryan Zimmerman out with an 0-2 fastball. The Nats are now 1 for 30 w/ RISP in the last four games after going 1 for 29 in three-straight losses to the D-Backs. A groundout to third by Michael Morse advance both runners and leaves it up to Jayson Werth to drive the Nats' first runs in. (1 for 31 w/ RISP). Jayson Werth grounds out to short. 2 LOB, 1 for 32 w/ RISP...

4. RISP Woes: Danny Espinosa doubles to start the top of the second, and one out later (1 for 33 w/ RISP) moves to third when Wilson Ramos grounds to second and is robbed by a diving Brandon Phillips. Two down, 1 for 34 w/ RISP. Dontrelle Willis issues the third walk of the game, this time to the opposing pitcher, and Ian Desmond gets a shot to give the Nats the lead, but grounds out weakly on the first pitch he sees after the walk. 1 for 35. 0-0 after one and a half. An error by Ian Desmond, his 22nd, on a grounder to short off Reds' third baseman Todd Frazier's bat and a two-out single by Dontrelle Willis bring Brandon Phillips up with runners on first and third and his single through second scores the Reds' first run, 1-0 Cincinnati after two innings in Great American Ballpark.

3. 1 for 36?: An error by Brandon Phillips on a Brian Bixler grounder and a one-out single by Michael Morse off Dontrelle Willis and the Nats have another runner in scoring position in the third. First and second with Werth at the plate, when the Reds' starter bounces one and Bixler takes off for third, but Cincinnati backstop Ramon Hernandez blocks it expertly and throws Bixler out before Werth grounds to short to end the Nats' third. After an 11-pitch scoreless bottom of the third in which Chien-Ming Wang allows only a walk, Dontrelle Willis issues his fourth free pass in four innings on four pitches, putting Danny Espinosa on to start the frame. Jonny Gomes moves Espinosa into scoring position with a line drive single to left and Wilson Ramos brings them both home with his 11th HR of 2011. Oppo-boppo blast by the Nationals' backstop, 3-1 Nats in the fourth.

2. Two-Out Walk: Still 3-1 Nats in the sixth after Chien-Ming Wang throws an 11-pitch 5th in which he gives up a one-out single but nothing else. 73 pitches, 46 strikes, four hits allowed, one run, unearned through 5.0 IP by Wang. Danny Espinosa walks on four pitches again, eight straight balls from Willis to the Nats' second baseman, but a swinging K by Jonny Gomes and a double play grounder from Wilson Ramos end the top of the frame. After retiring the first 2 batters in the Reds' sixth on 5 pitches, Chien-Ming Wang loses a 10-pitch battle with Paul Janish, walking the Cincinnati shortstop before he gives up back-to-back two-out singles by Dontrelle Willis (3 for 3) and Brandon Phillips (2 for 4) who drives in his second and the Reds' second run of the night, 3-2 Nationals after six. Wang's done after 6.0 IP, 6 hits, 2 R, 1 ER, 4 BB, 2 K's, 92 pitches, 58 strikes, 10/6 GO/FO.

1. No Cheese, No: Tom Gorzelanny takes over for Chien-Ming Wang in the seventh and gets a weak groundout to second from Joey Votto before issuing a one-out walk to Jay Bruce and giving up a single to left by Ramon Hernandez. Gorzelanny gets Drew Stubbs looking for out no.2, but Reds' third baseman/shorstop Todd Frazier ties it with a two-out single to left-center that makes it a 3-3 game. There's a delay in the 8th as two banks of lights go out in Great American Ballpark. Reds' lefty Aroldis Chapman's already warmed up when they stop things. Chapman comes back out after the 20+ minute delay and gives up a leadoff single to Jayson Werth. Danny Espinosa bunts Werth over/wastes an out, and after a walk to Jonny Gomes, two straight groundouts end the Nats' eighth.

0. STRAIGHTEN THAT CAP!! PUNK!!: Sean Burnett gives up a leadoff walk to pinch hitter Dave Sappelt in the Reds' eighth. A sac bunt by Brandon Phillips moves Sappelt to second, and he holds up at third on a grounder to center by Edgar Renteria that probably should have scored him. First and third with one out for Joey Votto. Burnett gets the left-handed Red looking with a 2-2 slider for out no.2, and throws a 1-2 slider by Jay Bruce for out no. 3 and the end of the eighth. Ian Desmond singles off Francisco Cordero and two outs later he's at second when Michael Morse grounds out to short. 3-3 in the 9th. 1 for 13 with RISP, 2 for 42 in last four games. Collin Balester gives up a one-out broken bat single to short by Drew Stubbs and a line drive to lefty by Todd Frazier. First and second with one out and Miguel Cairo hits a gapper to left-center to win it. Ballgame. 4-3 Reds. 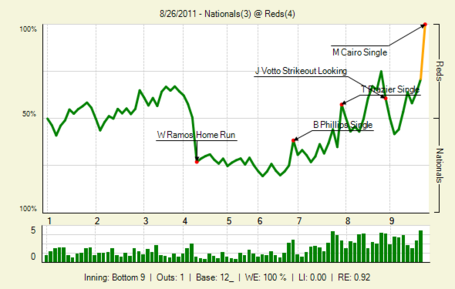