5. Welcome To The Bigs, Marrero: After Cincinnati starter Mike Leake pitches around a leadoff walk in the top of the first, the first ball hit Chris Marrero's way, in his MLB debut tonight in Cincinnati, goes right through the 23-year-old first baseman's legs off Brandon Phillips' bat to put the leadoff runner on in the bottom of the frame. E: 3. Marrero, the Washington Nationals' '06 1st Round pick played a near-flawless first in Triple-A Syracuse this season, but didn't stay down in his first major league fielding chance and got short-hopped. A sac bunt moves the Reds' Phillips into scoring position at second, but Nats' lefty Ross Detwiler, Washington's '07 1st Round pick, almost pitches around the error, giving up the sac before a groundout to first that Marrero handles. Two down, but Phillips, who took third on the groundout, scores on a wild pitch Detwiler throws to Jay Bruce, making it 1-0 before Detwiler strikes the Reds' slugger out. Detwiler falls on the mound and bounces one off Ramos. Marrero's first major league E leads to a run, 1-0 Cincinnati in Great American Ballpark...

In Marrero's first MLB at bat, the right-handed hitter flies out to Drew Stubbs in center on 1-0 fastball from Mike Leake that ends a 1-2-3 second for the Nats.

4. RHINO POWER: Last night's starter Dontrelle Willis was just a few seconds into an interview on the Reds' broadcast of tonight's game when Wilson Ramos took Mike Leake deeeeeep to left-center in Great American Ballpark for a solo HR in the Nats' third. "Oh, no," Willis said as he watched where it went and then returned to his answer. Ramos' 12th ties it at 1-1. Leake tried to sneak a first-pitch curve by the Nationals' catcher who crushes it and runs around the bases as it soars over the fence. Two outs later, Jayson Werth gets hold of a 2-2 fastball outside and pushes it out to right for his 16th HR. 2-1 Nationals after two and a half.

3. E: 3 No. 2, But Hit No.1: Brandon Phillips earns his way on in his second at bat, lining over Ian Desmond's outstretched glove into left-center. Reds' outfielder Dave Sappelt followed with the second single off Detwiler, drilling a sharp grounder under a drawn-in, diving Ryan Zimmerman at third. The Nats' left-hander got a ground ball to first from Joey Votto though, and might have had a double play if Chris Marrero's throw to second hadn't sailed into left field where Michael Morse failed to rush it back in as Brandon Phillips went back to make sure he'd stepped on third before running home. 2-2 game. A walk to Jay Bruce and back-to-back sac fly followed and the Nationals were down 3-2 then 4-2 when the third inning ended.

2. 1st Hit, 5th Run: The Nats' first baseman collects his first major league hit off Leake in the fourth. Chris Marrero lines to left field with two down, crushing a 1-0 fastball outside that bounces through short. Save that ball! Ross Detwiler gives up a one-out single to Ryan Hanigan. The Reds' catcher scores from second after a sac bunt on a two-out double off the left field wall, 5-2 Reds. Phillips destroys a 1-0 fastball from Detwiler, but a strong throw in by Michael Morse gets Phillips trying to take second on the recently-relocated Nats' left fielder's arm. 5-2 Reds after four, and it's still 5-2 when Miguel Cairo starts the Reds' sixth with a double by a diving Ryan Zimmerman at third and into the left field corner. Cairo steals third without a throw and after an infield single, scores on a sac fly by Edgar Renteria to make it 6-2 Cincinnati.

1. MORSE CRUSH!: Reds' right-hander Sam LeCure gives up a 500ft HR to left field by Michael Morse, who crushes a 2-2 fastball for his 22nd HR of 2011. The two-out solo shot lands in the third row of the upper deck in left and gets Washington within three at 6-3 Cincinnati and ends LeCure's evening. One-time Nats' lefty Bill Bray comes on to record the final out of the eighth. Still 6-3 Reds. Chris Marrero's third at bat in his debut comes in the ninth against Reds' closer Francisco Cordero. A filthy 86 mph 2-2 slider outside gets Marrero swinging for the first out of the frame. Barring a miracle comeback, Marrero will end his first game 1 for 3 with a K. Wilson Ramos grounds out to short for out no. 2. Brian Bixler grounds to short too and the Nats drop their fifth straight overall and are in danger of being swept out of Ohio if they drop the series finale tomorrow afternoon in Great American Ballpark. Jordan Zimmermann vs Jonny Cueto, who's going to miss that? 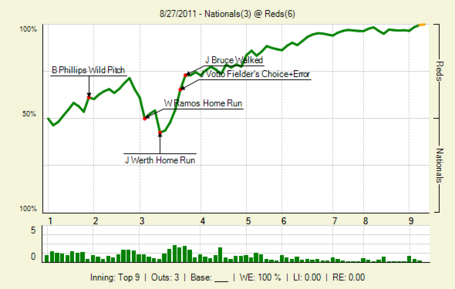