Share All sharing options for: Washington Nationals Take Two Of Three, But Drop Series Final 6-4 To The Atlanta Braves.

5. Wang Pt. 2: Chien-Ming Wang said he was just excited to be back on the mound last Friday for his first start in over two years. That and the fact that he's clearly still building strength in his right arm and surgically-repaired shoulder led to the starter gettting knocked around by a New York Mets team that scored four runs in the top of the first. The 31-year-old starter's up in the zone early today in Nationals Park. Michael Bourn singles through second on a 3-2 sinker that's up in the zone and the Braves' new leadoff hitter steals his 40th base of 2011 off Wang and Nats' catcher Jesus Flores. Back-to-back groundouts bring Bourn in and Atlanta goes up 1-0 early. Wang continues to struggle, however, giving up a two-out single by Dan Uggla on a hanging slider, a two-out walk to Eric Hinske and a two-out RBI line drive to right by Braves' shortstop Alex Gonzalez, that makes it 2-0 Braves. Wang throws 28 pitches in the first, but comes back with a quick 1-2-3 10-pitch second...Hm?

4. Reasons For Hope: Wang gives up a one-out single in the third, but the runner, Freddie Freeman, just beats out a throw from short-center by Danny Espinosa, who somehow tracked it down. Freeman's erased on a Dan Uggla double-play-grounder, however, 6-4-3 Desmond to Espinosa to Morse and Wang's through the third on nine pitches. The Nationals have a hit per inning so far, but nothing to show for them, so the former Yankees' two-time 19-game winner's back on the mound where he throws another 10-pitch 1-2-3 frame to leave the right-hander at 57 pitches, but still down 2-0 to the Braves after 4.0 innings pitched in Nats Park. Meanwhile, Atlanta's Brandon Beachy, a 24-year-old right-hander signed as an amateur free agent in 2008, has allowed one-hit per frame, but no runs through three, and he retires to the Nats in order in the fourth to hold the lead at 2-0.

3. Almost Out of Trouble: Chien-Ming Wang probably hasn't had much pitcher's fielding practice, and he fields a pitcher's weak grounder and throws it by first to start the Braves' fifth with a runner on second. Beachy takes third on a single to right by pesky Atlanta outfielder Jose Constanza, but doesn't run home when Michael Bourn grounds into a force at second. First and third for Martin Prado. Beachy's running on contact and thrown out at home on a grounder to third. Two down. Runners on first and second, and Freddie Freeman singles up the middle to make it 3-0 Braves when Bourn scores from second. Two on, two out for Uggla and he makes it hurt. 3-run HR to left. 6-0 Atlanta on Uggla's 23rd.

"Chien-Ming Wang coming back is a nice story and all, but he just faced 23 Atlanta batters and struck out none."

"I see two swinging strikes in 86 pitches, too."

2. Werth Visits Red Porch: Danny Espinosa works a leadoff walk out of Brandon Beachy in the bottom of the sixth after Tom Gorzelanny throws a scoreless top of the frame in relief of Chien-Ming Wang. Ryan Zimmerman, who's 6 for 12 so far in the series vs Atlanta after what follows, hits a single to left to put two on for Morse and a wild pitch by Beachy puts both runners in scoring position. Michael Morse singles to center to score Espinosa on back-to-back hits off Beachy, and the right-hander's second wild pitch allows Zimmerman to score from third with Jayson Werth at the plate. Werth gets ahead in the count and launches a 3-1 fastball to left, deeeeeeeep and GONE! Werth hits one to the back of the Red Porch seats in left-center. Two-run HR for the Nats' right fielder, and it's 6-4 Braves with no one out.

Anthony Varvaro, who replaced Beachy and walked Laynce Nix before the break, gets Ian Desmond looking with a 2-2 fastball once play resumes. One down. Jesus Flores takes a similarly low 2-2 fastball for another called strike, but more down the middle. Brian Bixler works a two-out walk, and it's Rick Ankiel vs Eric O'Flaherty. Lefty vs Lefty. Ankiel flies to left to end the sixth.

1. Left, Left, Right: Sean Burnett throws a quick 6-pitch 1-2-3 seventh against Atlanta, but the Nats can't get anything off O'Flaherty in the bottom of the frame. Burnett's back out and after another quick 1-2-3 the Nationals will have to get the tying runs off Jonny Venters or Craig Kimbrel. They don't get them off Venters. The Braves' lefty gives up a sharp line drive by Werth that Dan Uggla snags, but the next two Nats get abused. Nix down swinging at three-straight 96 mph heaters, and Desmond gets more of the same, swinging K at a 96 mph 2-2 sinker. Still 6-4 Atlanta. Venters throws 12 pitches, 9 strikes. Todd Coffey throws a scoreless frame, the fourth straight by a Nats' reliever, but they'll have to get two off Braves' closer Craig Kimbrel. No such luck. Jesus Flores grounds out and Laynce Nix and Rick Ankiel go down swinging. Braves win, 6-4 final. Atlanta salvages one of three in D.C. 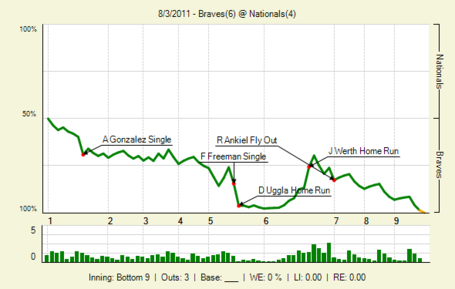