Washington Nationals' Stephen Strasburg Set To Return On 9/6...Have Tickets? Want To Win Some?

Share All sharing options for: Washington Nationals' Stephen Strasburg Set To Return On 9/6...Have Tickets? Want To Win Some?

I got an email from the folks at TiqIQ.com this morning asking if I'd like to put up a post about a contest they're running to give away tickets to the Washington Nationals' 9/6 game against the Los Angeles Dodgers, which should, barring any setbacks, or hiccups, feature the return of the Nats' '09 no. 1 overall pick, Stephen Strasburg. Before next Tuesday, however, Strasburg's got one more rehab start to get through tomorrow night in Harrisburg.

• So here's how the contest works:

• Go over to TiqIQ's Facebook page, "Like" them, and enter your prediction for Strasburg's final rehab pitching line in the comments for the post on the giveaway which is at the top of the page right now. Predict Strasburg's (IP/H/R/K/BB) for his sixth and final rehab start Thursday night in Harrisburg, and if you guess correctly, you could be in Nationals Park next Tuesday courtesy of TiqIQ.com for the return of the right-hander who shook up the majors last season in his MLB debut and in each start that followed before his injured right elbow forced him from the mound.

• If you missed the embedded link above HERE is a link to the TiqIQ Facebook Page.

Ticket prices for next Tuesday are soaring, "up over 95% in the last two weeks" since it became clear that the 9/6 game would/could be the date for Strasburg's return according to TiqIQ's research... 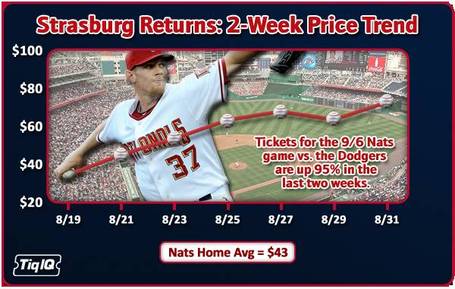 Barring any setbacks or hiccups in our plans Federal Baseball will be in Nats Park on Tuesday night to witness Strasburg's return. If you've been having trouble getting tickets (they're going quickly), here's an opportunity to win some and experience Strasburg's return in person. There are also some tickets (though it seems to be down to single tickets) available through TiqIQ's "Make an Offer" deal and you can buy tickets to any Nats game for the rest of the season through the links below. Good luck. And thanks to TiqIQ for giving some Federal Baseball readers a chance to win their way into the game.

• HERE'S A LINK where you can "Make an Offer" for the Nats/Dodgers game on 9/6. Read the instructions so you know how it works.

• And HERE'S A LINK where you can find tickets for the next homestand and beyond.