5. No. 450: John Lannan's (3-0) in four starts against Atlanta this season, holding the Nats' NL East rivals to eight runs on 24 hits in 23.1 IP in which he's walked just nine and K'd 18. The Braves haven't beaten the Washington Nationals' left-hander since September 25, 2009. Lannan retires the first four batters he faces in order on 14 pitches tonight, but the 16th pitch of the evening is a 1-0 change to Larry "Chipper" Jones who connects for his 450th career HR, sending a soaring fly ball to center field in Turner Field for a one-out solo shot in the second that gives Atlanta a 1-0 lead. Jones' 14th HR of 2011. Derek Lowe pitched around a leadoff single and a one-out walk in the first, and retired the Nats in order in the second. The Braves' right-hander walks Jesus Flores in the third, and one out later gives up a single to Ian Desmond, but Jayson Werth K's looking at a 2-2 slider inside and Ryan Zimmerman grounds weakly to third to end another scoreless frame...

4. No. 1: Braves' right-hander Derek Lowe has 521 plate appearances over the course of his 15-year MLB career, and before tonight he'd never managed to hit one out of the park. Lowe battles Lannan in an eight-pitch AB in the third and gets hold of a full-count fastball that he yanks out to left. Lowe hits a low liner that just clears the wall in the left field corner for the first MLB HR of Lowe's career. 2-0 Braves. John Lannan walks Martin Prado with one down in the Braves' half of the third, a passed ball moves the runner to second and a groundout gives the Braves a runner on third with two down. Martin Prado grounds sharply to Desmond, who throws from deep in the hole at short. Desmond's low throw is scooped by Chris Marrero at first, but Uggla beats it to the bag. Prado scores, 3-0 Braves after three.

3. 11 And Counting: After Ian Desmond's one-out single in the third, eight Nats are set down in order by the Braves' starter, who's up to 73 pitches after five scoreless in Turner Field. John Lannan, apparently angered by the HR by the opposing pitcher, gets focused after the third and starts mowing Braves down, collecting four K's from the next six batters as he retires the Braves in order in the fourth and fifth. 6 K's, 76 pitches, 50 strikes thru 5.0 IP by the Nats' lefty. Derek Lowe gets a groundout to short from Desmond and back-to-back backwards K's from Jayson Werth and Ryan Zimmerman and Lowe's sent eleven straight Nats back to the dugout. 3-0 Braves after five and half.

2. MORSE CRUSH: Derek Lowe's got a shutout going through six, but one pitch into the seventh that's over when Michael Morse crushes a first-pitch sinker from the Braves' right-hander and sends it out to right-center and into the stands. Solo HR. No. 24 of 2011 for the Nationals' 1B/LF...Braves' skipper Fredi Gonzalez goes right to the pen for Eric O'Flaherty, who retires the next three Nats in order in spite of a gritty 10-pitch AB by Jonny Gomes. 3-1 Braves after six and a half in Atlanta.

1. Venters And Kimbrel: Braves' left-hander Jonny Venters replaces O'Flaherty in the eighth and retires the Nats in order on nine pitches and three groundouts. 3-1 Braves after seven and a half. Henry Rodriguez dials it up to triple digits twice, ending a scoreless eighth with a 101 mph fastball low and away that gets Chipper Jones swinging. Braves' closer Craig Kimbrel gets Jayson Werth looking with a 1-2 fastball inside. Werth's 3rd K to go with a walk in four at bats. Ryan Zimmerman flies to right. Two down. Michael Morse K's swinging through a diving 100 mph fastball away. 41 saves for Kimbrel. 3-1 Braves win. An MLB rookie record for the Braves' closer. Good for him... 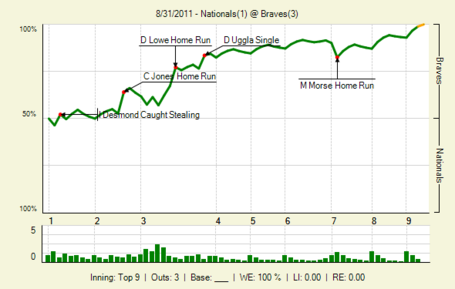