5. GIGANTOR CRUSH!: Rick Ankiel's leadoff single starts the Nats off on a good note in Colorado. Rockies' right-hander Esmil Rogers gets a groundout from Danny Espinosa, but walks Ryan Zimmerman and serves up a 2-1 slider that Michael Morse lines to center for an RBI hit. 1-0 Nationals early, but they strand two when Jayson Werth flies to center and Laynce Nix K's chasing a slider into the dirt. The Nats make Rogers throw 29 pitches in the first, and it looks like Ross Detwiler might be in for a long inning too when Rockies' leadoff man Eric Young works a leadoff walk out of the Nats' lefty, but a double play grounder from Dexter Fowler and a groundout to first by Todd Helton end the first after only 11 pitches by the Nationals' starter. 1-0 Nats after one...

4. Rosswiler: Ross Detwiler's faced the minimum threw two on 24 pitches after a 1-2-3 bottom of the second in Coors Field. The Nationals get another single from Ryan Zimmerman, who's now got a 13-game hitting streak, and Jayson Werth gets a fastball in the bicep on a 1-2 pitch from the control-challenged Rockies' right-hander but the Nats can't add to their lead in the third, so their '07 1st Rounder's back on the mound. 11 pitches and three quick outs later, Detwiler is through his third scoreless against the Rockies, and he's done it on just 35 pitches, 19 of them strikes.

3. Second Time Through: Ross Detwiler walks Todd Helton with one down in the Rockies' fourth, and Colorado SS Troy Tulowitzki collects the first hit of the night off the left-hander, singling to right. Ty Wiggington's got the second hit of the night in the next at bat with an RBI single to center that plates Helton, 1-1, and it looks like Tulowitzki will score too on a single to right by Chris Nelson. Jayson Werth comes up throwing, however, and there's going to be a play at the plate. Werth's throw beats the runner home and Wilson Ramos holds on! "You're out!!" yells homeplate umpire, Phil Cuzzi. One low liner to short later, it's tied at 1-1 after a 22-pitch frame. Detwiler's up to 57 pitches after four.

2. RISP FAIL: The Nationals strand two when Jayson Werth K's after back-to-back two-out singles by Ryan Zimmerman and Michael Morse in the 5th. The Nats are 1 for 7 w/ RISP and they've left seven runners on through five. Rockies' catcher Chris Iannetta starts the bottom of the frame with a leadoff double to left-center and he's on third with one down after a sac bunt by Emil Rogers when Ross Detwiler gives up an RBI single by Eric Young that makes it 2-1 Rockies. Colorado's 3 for 5 with RISP after the fifth. Washington has runners on first and third with two down in the 6th after an Alex Cora two-out single sends Ian Desmond from first-to-third™. Cora's hit knocks Esmil Rogers out but lefty Matt Reynolds gets Rick Ankiel swinging to end the Nats' 6th. 1 for 8 w/ RISP.

1. Two Pitches Later: Nats' right-hander Collin Balester throws a 1-0 fastball to Troy Tulowitzki and the Rockies' shortstop destroys it. A towering fly ball just to the left of center sails over Rick Ankiel and into the stands, 3-1 Colorado on a pitch Balester wants back. That was the second pitch Balester's thrown in his first inning since being recalled by the Nats earlier this week. Rockies' right-hander Matt Lindstrom retires the Nationals in order on six pitches in the top of the seventh, and Balester bounces back with a scoreless bottom of the frame. Rafael Betancourt retires the Nats in order on 10 pitches in the 8th.

0. Winded, Blames Thin Air: Former Rockies' reliever Ryan Mattheus gets roughed up after surrendering a leadoff single to Todd Helton in the Colorado eighth. Troy Tulowitzki sends Helton around to third with a double and after an intentional walk to Ty Wiggington, second baseman Chris Nelson makes it 4-1 with an RBI single to right. Mattheus forces in a run one out later when he hits Chris Iannetta to make it 5-1. A bases loaded walk to Eric Young makes it 6-1 and this one is officially out of reach. The Nationals put two on with one out in the ninth, but Danny Espinosa lines out to short to add to the RISP FAIL, 1 for 9. 2 on, 2 out for Zimmerman vs Huston Street? Two-out double, two runs score, 6-3 Rockies. Michael Morse flies to right to end it, however. Final score: 6-3 Rockies. 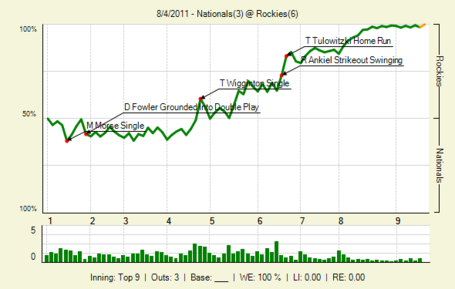