5.%^$&$&^ Bloops: Livan Hernandez throws 13 pitches in a 1-2-3 bottom of the first after a two-out single by Ryan Zimmerman in the top of the frame extends Zim's hitting-streak to 15 games before he's stranded on a grounder to short by Michael Morse. Jayson Werth doubles off Rockies' right-hander Jhoulys Chacin in the second, but after moving up a base on a groundout to short by Jonny Gomes, Werth's stranded at third two outs later. The Rockies get a leadoff [bloop] double by Troy Tulowitzki in the bottom of the second, but he's stranded at second three outs later and Livan Hernandez is through two scoreless on 26 pitches...

4. Non-Chalant-E: The Rockies' third starts with a leadoff single by Chris Iannetta, who takes a 2-0 slider back up the middle. Colorado starter Jhoulys Chacin squares to bunt, but according to the home plate ump he pulls back in time for it to count as a HBP when a curve hits him. Eric Young squares to bunt and gets it down, but Livan won't let Colorado give away an out as he sails a non-chalant throw by first allowing Iannetta to scores for a 1-0 lead. Dexter Fowler follows with a two-run triple to right and a HBP on the pitcher and throwing error on a bunt put the Nationals behind 3-0. Troy Tulowitzki's sac fly brings Fowler in and it's 4-0 Rockies after a 19-pitch third by Hernandez.

3. Morse = Monster: Ryan Zimmerman scores from first after the first of three walks Jhoulys Chacin issues in the top of the fourth. Zim comes around on Michael Morse's 27th double of 2011, RBI no. 65. 4-1 game. Jayson Werth and Jonny Gomes take walks no. 2 and 3 of the inning (4 on the night) by the Rockies' 23-year-old starter. Bases loaded, 0 outs. Ian Desmond grounds back to the mound and into a force at home. Wilson Ramos K's swinging, and only a wild pitch with Livan Hernandez at bat allows a run in. Werth scores from third to make it 4-2, Rockies still lead.

1. FFWD Comeback: Danny Espinosa doubles and scores from second when Michael Morse singles after Jhoulys Chacin's 5th walk of the night puts Ryan Zimmerman and Espi on. 9-3 on Morse's second RBI hit in two innings, but that's all the Nats get in the 5th. Rockies' right-hander Greg Reynolds gets the first two outs of the sixth before Tom Gorzelanny hits a two-out single to keep the inning alive. Rick Ankiel makes the hit by the pitcher hurt when he sends a towering two-run blast to right and off the second deck. 9-5 Rockies. Danny Espinosa and Ryan Zimmerman hit back-to-back two-out doubles to make it 9-6 when Espinosa scores. Michael Morse singles to drive Zim in, that's three RBI hits and 3 RBI's in three-straight AB's by Morse and 9-7.

0. Keeps Getting Uglier: The Rockies get a run back in the bottom of the sixth when Carlos Gonzalez singles with two down and scores on a two-out double by Tulo. 10-7. Chris Iannetta, pinch hitter Ian Stewart and Eric Young hit three-straight two-out hits off Todd Coffey in the Rockies' 7th. Two singles and an RBI double by Young make it 11-7. Stewart and Young score on the fourth straight two-out hit, a two-run single by Dexter Fowler, 13-7, all with two outs. Michael Morse collects his fourth hit of the night with a two-out single in the Nats' eighth, but he's stranded when Werth K's. Henry Rodriguez loads the bases with two down in the eighth, walks in a run, throws a wild pitch that lets one in and makes an ugly game even uglier, 15-7 after eight in Coors Field and that's how it ends. 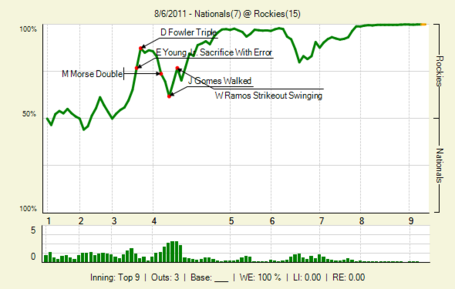