The rain stopped and the tarp came off the infield about an hour before the scheduled start time for Stephen Strasburg's first rehab start this afternoon at Municipal Stadium in Hagerstown, Maryland. Strasburg, in the Hagerstown Suns' home whites, no. 37, warmed up on the right field "bullpen" mound as the assembled fans and members of the media struggled to capture the first images of the 23-year-old right-hander preparing to step back on the field for the first competitive action since suffering a "significant tear" of the ulnar collateral ligament in his right elbow last August.

Municipal Stadium was packed. "I've never seen it like this ever, for any event," a regular at the park said as he stood along the left field line waiting for the start of the game. "This is the closest you'll ever get to him for $7.00," the man said to his son, who was maybe twelve and busy dissecting Strasburg's delivery. "He really doesn't have much of a leg kick," the kid said as he watched the Nats' '09 no.1 overall pick warming on the other side of the field. 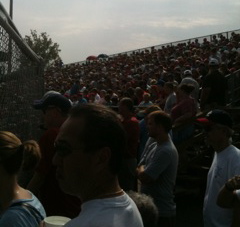 The crowd stood and began to applaud as the 6'4'' right-hander, Suns' catcher David Freitas and members of the Nationals' media relations staff walked in from the pen and the noise grew as he reached the first base bleachers and made his way into Suns' dugout. Moments later Strasburg was on the mound where he got a swinging strike with a first-pitch fastball that drew a few "oohs" out of the crowd. The Nats' ace was up 0-2 quickly on Greensboro Grasshoppers' infielder Noah Perio, who went down chasing a two-strike pitch in the dirt and was thrown out at first for the first out Strasburg's recorded in almost a year.

Strasburg got up 0-2 early on the second batter he faced too, and got a swinging K with a high fastball. "Has he thrown a ball yet," a fan asked. He hadn't, but he gave up a two-out single to Grasshoppers' left fielder Christian Yelich, who sent a sharp grounder through second for Greensboro's first hit. Suns' first baseman Brett Newsome saved Strasburg from surrendering two straight hits, however, diving on a sharp grounder and stepping on first to end the top of the inning after 16 pitches by Strasburg, 12 of them strikes. 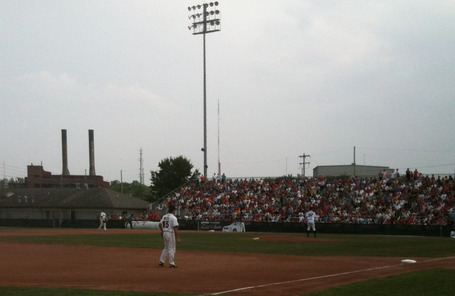 MASNSports.com's Ben Goessling (@MASNBen) reported that the Nats' radar gun had Strasburg sitting, "... at 97, touching 98 once in first." The Suns' stranded 2010 10th Round pick Blake Kelso at third after the shortstop tripled with one down in the bottom of the first, and Strasburg was quickly back out on the mound and up 0-2 on Greensboro DH Wilfredo Jimenez, who was called out on strikes when he took a filthy 0-2 bender from the Nats/Suns' right-hander. That's 3 K's from five batters, but the next Grasshopper, Jacob Realmuto, connects with a 1-0 fastball and sends it out to right where it bounces off the ads atop the outfield wall for a solo HR and a 1-0 Greensboro lead.

Greensboro shortstop Daniel Black sent a one-out single back up the middle off Strasburg, who got a foul-tip strike three and his fourth K from Grasshoppers' third baseman Ryan Fisher for the second out of the second and ended his first rehab start at 31 pitches since he was limited to two innings or 35 pitches total. Strasburg received an ovation as he walked off the mound, having completed yet another step on the way back from Tommy John surgery. 1.2 IP, 3 H, 1 R, 1 ER, 0 BB, 4 K's, 1 HR, 31 pitches 25 strikes. Strasburg's back.